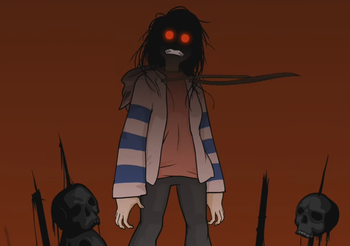 "We have such sights to show you..."
Advertisement:

The Internet has time and time again proven that animated shorts, series and films made for the web can be just as nightmare-inducing as their counterparts in other media. Below are some of the creepiest, most unsettling, and outright most terrifying animations made just for the net.

NOTE: Tropers are naturally curious. Having them stumble into links which scar them for life is not to everyone's tastes. Merely adding a link without a description is not enough for an example. Remember, even a description of what's behind the link is still scary on its own.