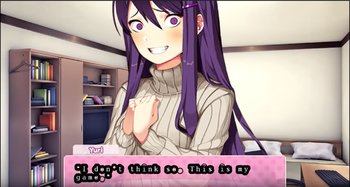 The Fourth Wall Will Not Protect You from Yuri.
Advertisement:

While the original Doki Doki Literature Club! had its fair share of disturbing subject matter, the fan gamer mods made by The Bike, can not only rival the original in terms of being genuinely horrific but at times, the videos may even be worse than the original.

open/close all folders
Yuri
Other