I'M AN ABOMINATION! And I'm comin' to your house after schoooooooool!
Gel-Arshie 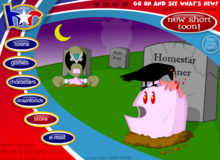 May not look like it, but still.
While the series runs primarily on Rule of Funny, that isn't to say that it can't also give the audience the jibblies.
Advertisement:

Remember, this page is for describing general sources of Nightmare Fuel.