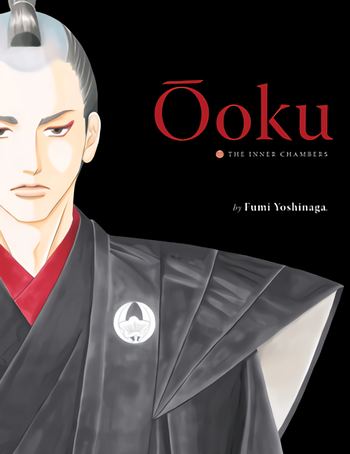 During the reign of Shogun Iemitsu, a plague appears out of nowhere. It's presence is marked by a fever and red boils. Starting in a small mountain village, it soon spreads to the wider population. Oddly, the only people who catch it are men, and every four out of five them perish.
Advertisement:

The effects this has on wider society are felt even four generations later. Traditionally male roles are now taken up by woman, including the position of Shogun. The Inner Chambers- which was once home to female concubines- now house the male consorts of the current Shogun, Tokugawa Yoshimune. Now in a position to enact lasting change, Yoshimune is determined to fix the rampant inequality and wastefulness of her country.

Ōoku: The Inner Chambers (大奥, Ōoku, lit. "Great Interior") is an alternate history shōjo manga by Fumi Yoshinaga. It was serialized in the magazine Melody from 2004 to 2020, and compiled into nineteen volumes. Viz Media holds the license to release the series in English.

A film adaptation of the first four chapters was released in 2010. Two years later, a ten episode drama aired on TBS.

Ooku contains examples of the following: