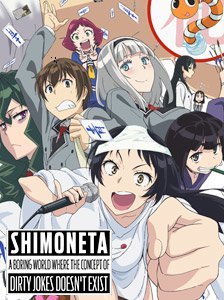 Shimoneta: A Boring World Where the Concept of Dirty Jokes Doesn't Exist (Shimoneta to Iu Gainen ga Sonzai Shinai Taikutsu na Sekai) is a Light Novel series written by Hirotaka Akagi and illustrated by Eito Shimotsuki. The light novels were published under the Gagaga Bunko imprint from 2012 to 2016 for 12 volumes.

In a dystopian future, Japan passed severe censorship laws regarding anything obscene. This means that any foul language, pornography, sexually explicit images, or even the mere mention of the correct medical terms for certain "obscene" body parts have been outlawed.

The story proper follows Tanukichi Okuma, a young man who has gone from a middle school with one of the poorest public decency ratings to the most morally upstanding high school in the country in pursuit of a young woman he admires named Anna Nishikinomiya, the standing Student Council President. Amazingly, he gets the chance to be closer to her when she recruits him into the student council in the hopes of tracking down Blue Snow, an obscenity terrorist. Anna suspects that Blue Snow may be hiding within the school, and she needs Tanukichi's help to find her.

Things take a turn for the wacky when the normally reserved Ayame Kajou, a fellow student council member, turns out to be Blue Snow. She blackmails Tanukichi into aiding her in forming SOX, an organization dedicated to abolishing the censorship laws.

Winning one of the three excellence awards at the 6th Shogakukan light novel prize in 2011, the series was adapted into a 12-episode anime by JC Staff in the summer of 2015, and it was licensed by Funimation for English subtitled streaming; they later released the series in a box set with an English dub. A manga adaptation was serialized in Monthly Comic Blade from 2014 to 2016.

Shimoneta: A Troping World Where the Concept of Tropes Exists: