Space Channel 5 has a wide variety of characters, each with their own past that effects their future.

Be warned, there will be spoilers for the game's events! 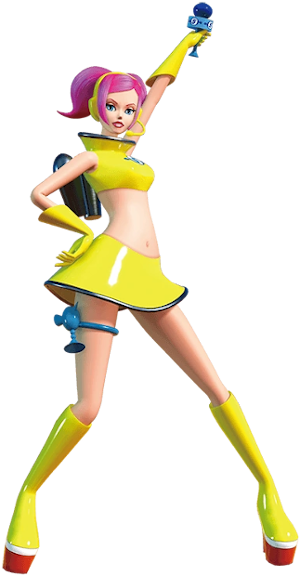 Ulala is the main protagonist of the Space Channel 5 series. She is Space Channel 5's star reporter and a huge hit with the galaxy audience. She is also an excellent dancer and one of gaming's most recognizable female characters.

At the age of 12, Ulala was the sole survivor of a spaceship accident. She was rescued from the brink of the galaxy by a Space Channel 5 reporter, and the rescue inspired Ulala to become a reporter for the station that saved her life. The reporter that saved Ulala soon left Channel 5 however, and she never got to thank him for saving her. Eight years later, Ulala soon got to work with the station. However, it wasn't until another two years that she got her big break as a space reporter, during the Morolian Invasion in the first Space Channel 5.

Ulala is often portrayed as confident; often heading into danger without showing the slight trace of fear.In Part 2 however, Ulala seems to have taken a less confident stance against the Rhythm Rogues. She often exclaims shock at some of the drama in the game, such as when people are taken hostage. In the original, she stated these developments calmly and professionally. However, Ulala still retains plenty of her confidence from the prequel. In Kinda★Funky News Flash, Ulala, now a senior reporter, is no longer playable, but still serves as the central character, and is tasked with training newcomers Roo and Kie.

Ulala is confident and ready to meet any challenge, but also uniquely human, excitable and dramatic, and never without the help of friends and fans alike as a result.

Calling himself "The Voice of Truth", Jaguar is a mysterious man who abandoned mainstream reporting so he could reveal secrets to the galaxy instead of just struggling with ratings. He's the captain of the Space Pirate Broadcasting Station, and commands the Rougeship-A-Go-Go. When the Morolians invade, he clashes with Ulala a few times as he believes she's interfering with the investigation, but they later team up to fight the aliens and Blank. It's later revealed that Jaguar used to work for Space Channel 5, and is actually the reporter who saved Ulala's life.

In the second game, he is captured in the prologue, so his whereabouts are unknown. He was really brainwashed by Purge and became Shadow, but is freed by Ulala.

Pudding is the reporter for Space Channel 42. Formerly a teen singing sensation, she's not at all happy when Ulala starts muscling in on her spotlight and has to be dispatched with a dance-off.

When the Morolians invade in the first game, she's beaten to the scoop by Ulala and becomes her ally after being rescued from a tight spot. Later, when the Rhythm Rouges try taking over, she returns, now with skills on the electric guitar.

The chief of the Sexy Space Police, Eastern Venus sector. Making her debut in Part 2, Pine was tasked with rescuing President Peace from the Rhythm Rogues, but failed to keep Ulala off the scene. Later, she manages to find Purge's hideout and sends out a distress signal to get backup.

Ulala's director, who is determined to save their failing report show. He won't hesitate to berate Ulala for her mistakes, but she can quickly earn his enthusiasm by performing well. For unknown reasons, he never sets foot off his Astrobeat Ship; apparently, only Noize has ever seen him in person.

He serves a relatively minor role outside of narration. At the end of the first game, he's used as a human(?) shield by Giant Evila. In the sequel, while helping Ulala battle Purge, he protects her from a laser and is apparently lost with the space station, only to turn up unharmed before the credits.

Ulala's dependable co-worker in Space Channel 5 Part 2. He works directly under Fuse and it is speculated, although not confirmed, that he is the only person to have seen the mysterious director.

Noize is a whiz-kid when it comes to inventing. He helps out on repairs to the broadcasting shuttle and creates new types of microphones for Ulala to use in her reports. The Channel 5 technical development chief headhunted and found him due to his skills in technology. In his free time, Noize likes to mix music.

He helps out Ulala a lot during the events of Part 2, even becoming her boss when Fuse dies.

Space Michael is one of the galaxy's most famous musicians & heroes, and a former news reporter for Star News Station, which is ironic, considering who he is. While his dance energy isn't powerful as Space President Peace's singing powers, it can still transcend time and space, and he's saved earth from aliens with it at least once 500 years before the events of the game took place.

In the first game, he's hypnotized by the Morolians and has to be rescued by Ulala. In the second game, after Blank was almost literally kicked out of Space Channel 5 in the first, he becomes the station's CEO. Midway through the game, he's caught by surprise by Purge and Shadow when they attack Channel 5 headquarters, and is held captive once again. After Ulala frees him once again, he takes a more active role in the game, directly battling Purge with his singing in Channel 5 HQ, and getting revenge on Shadow and the Dark Rhythm Robots in Purge's Mystery Zone.

Michael's appearance in Part 2 was the King of Pop's final video game appearance before his death in 2009. And while not addressed in-story, he's absent from Kinda★Funky News Flash, though it's reasonable to assume his character died with him.

A pair of fresh-faced reporters at Channel 5, making their debut in Kinda★Funky News Flash. Roo, the one with moonstone blue hair, has a weird habit of standing behind and to the right of people; Kie, the one with charming lavender hair, on the other hand, stands to the behind and left. 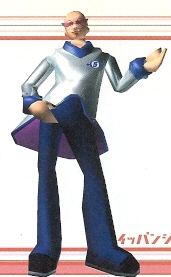 The CEO of Space Channel 5 and instigator of the Morolian invasion. Cornered by low ratings, he sent Ulala out to make her debut by reporting on the alien dance craze, not realizing she would discover the brainwashing apparatus and trace it back to him. At the end of the game, he is defeated by Ulala and sent flying off in the remnants of his Giant Mecha.

In Part 2, he's been replaced by Space Michael, but appears in Extra Mode as a backup dancer. Not all fans were happy.

A robotic clone of Ulala designed by Blank. Dubbed the "Ultimate Reporter", she was intended to be Channel 5's ticket to universe-wide superstardom. However, she's unable to stop Ulala from dancing her way through the broadcasting station and reaching Blank.

When Part 2 rolls around, she's been reprogrammed and mass-produced as a security bot for the broadcasting station. 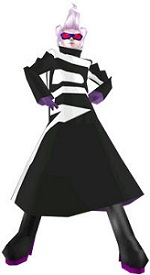 The big daddy-o Ulala faces in Part 2; leader of the Rhythm Rogues, Purge deploys his robots to abduct people from all over the galaxy with the intent of harnessing their groove energy. Doing so will allow him to complete his superweapon, the Ballistic Groove Gun, and hypnotize the entire universe into dancing with him.

His backstory is a little more complicated. When he was very young (as in 9 years old), he was successful in the field of wave mechanics.The social status and economic power was sufficient enough for him to live on his own.

Eventually, he started to believe that “This galaxy is at the mercy of petty worries”, “People are unhappy and stupid in the galaxy”, and “I’ll lead you to paradise at the hands of my good karma.” With that belief, he decided to make all the galaxies dance.

Unfortunately for Ulala, Purge is much more serious than her previous enemies: wreaking havoc with his dancing robots, kidnapping the President, and even blowing up the Space Channel 5 station. While he can also harness mysterious dance powers, his inability to understand love or friendship proves to be his undoing, and Ulala uses the power of the people he abducted to defeat him.

Did we mention that he's the best dancer in the universe? Needless to say, Ulala's got her work cut out for her.