open/close all folders
Advertisement:
Bloodliners
Mysterious individuals born with abilities akin to Pokemon. About 16 years before the story's events their numbers began to increase rapidly, and also begin to skew to being predominately female. They can be divided into the following categories (from most common to rarest): Technique, Species, Heart and Dominion. Many resemble a certain someone immensely...

Be warned, this section is full of spoilers, and for some characters, the mere fact that they are a Bloodliner is a Spoiler!

A young trainer from Viridian City with a strong physical resemblance to Ash, and one of Ash's main rivals in Kanto (along with Paul).

A young girl who travels with Red after he rescued her from a swarm of Zubat in the cave of Mt Moon. A Heal Pulse Bloodliner.

A young Ash-Clone from canon. Currently lives in Hop-Hop-Hop Town with his mother.

A mostly silent trainer who appears to hail from the Pokémon equivalent of Catalonia.

A young ninja apprentice from Kalos' Ninja Village, and a close friend of Sanpei. He's a Double Team Technique bloodliner.

A Flying Heart Bloodliner who serves as a Trial Captain on Akala Island, solo for a time.

A Thunderbolt Bloodliner who travels Unova with the desire to become a great Electric type trainer. The girlfriend of Jamie Oliver.

A Greninja Species Bloodliner who seeks to make himself stronger. After losing in the Kalos League, he seeks out Ultima in the Sevii Islands for training.

A student in the Vientown Ranger School, and granddaughter of former Top Ranger Jenkins Jackrum. She's a Pidgeot Species Bloodliner.

A Ranger from Fiore who is staying with his Aunt Wicke in Alola to recover from an intense battle with Team Cipher, and get away from his mother, who by all accounts is an absolute Jerkass.

A childhood friend of Mars whose death was the breaking point that sparked Mars' Start of Darkness.

A Johto born Bloodliner and trainer who competes in Johto League championships.

A trainer and former gang member from Castelia City.

A girl among those who call Mabel Granny, and a Pokémon Performer. She's a Magnezone Bloodliner.

A girl who was raised by Water-type Pokémon. She's a Starmie Bloodliner.

A boy from Stone Town about to begin his Pokémon journey along with his four female friends — Hoshi, Rana, Kusa and Monet.

A boy from the Orange Islands who has just begun his Pokémon Journey, going to the Johto region. The son of Kumquat Gym Leader Luana.

A boy from New Tork City in the Decolore Islands who dreams of becoming a Pokémon trainer. He succeeds after befriending Tracey Sketchit and they help each other through their respective issues.

A Kanto Trainer on her journey. Strongly resembles Ash Ketchum.

A young man native to Unova and currently residing in Johto. Son of a lawyer and a rising star in the smuggling underworld.

A trained who made it to the Top 8 in Indigo League the previous year. Currently taking a sabbatical to take care of his injured mother and the family farm.

A trainer who took part in the Indigo League the previous year. After meeting Ringo, she moved in to his family farm to help.

A girl who lives deep in a forest of Hoenn as the leader of a pack of Poochyena and Mightyena. Despite her name, she's actually a Midnight Lycanroc Bloodliner.

A trainer from LaRousse City.

A former Aura Guardian apprentice, who lost his way and now seeks to wage war against normal humans. Has a Lucario named Caliburn as his partner.

An Ice-Heart bloodliner whom Lorelei met in the Icefall Cave. She's currently part of the Pokemon G-Men.

A young girl from Celadon, who discovered very recently that she was a Bloodliner and was kicked out from her home by her parents. She had to be on the run for weeks until she arrived in Hop-Hop-Hop Town.

A young female trainer from Crimson City, and the heiress of the Fisher clan. She's a Victreebel Species Bloodliner.

A young Fire Heart Bloodliner from Cinnabar, and Blaine's granddaughter.

A member of the Laramie clan, who works at the Pokémon Reserve in the outskirts of Fuchsia. A talented Ponyta/Rapidash rider.

A friend of Lara Laramie, who also shares her passion for riding Ponyta.

A Sky Trainer from Kalos, and a Gust Technique Bloodliner. Fitzdane's girlfriend.

A trio of Bloodliners who operate as superheroes/vigilantes in Goldenrod City and its surrounding towns and cities. They're known collectively as the Night Watchers.

Flamestorm is a Flamethrower Technique Bloodliner, while Flashstrika and Decid-Arrow are a Zebstrika and Decidueye Species Bloodliners, respectively. Their real names are Ronald Storm, Bartholomew J. West, and Oliver Hawke.

A mysterious girl who appears in front of Red and Yellow in the Safari Zone.

A Farm Girl in Fiore. She's a Rototiller Bloodliner.

Daughter of Rand and Leanne. She's a Dig Bloodliner.

A mother and daughter who moved to Crimson City after an incident with Katana's husband, which resulted in his death when he tried to attack them for being Bloodliners.

A young girl Professor Ota found in Geosenge Town. She's an Ancient Power Bloodliner and was taught by AZ how to read an ancient language.

A Ranger in training. She's a Thundershock Bloodliner. 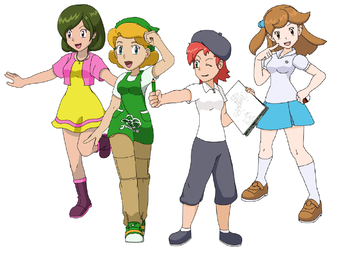 A group of girls from Stone Town about to begin their Pokémon journeys, planning to travel together along with Midori.

A family of nurses found all throughout the world.

A family of police officers found all throughout the world.

A family of training club owners found all throughout the world.

A trainer from Sinnoh who, for some reason decided to start his journey on Kanto. He only seeks the strongest Pokemon, and has a mindset of winning at all costs.

A top-rated agent from the International Police. Currently on the trail of an important case.

Sir Aaron's partner during his lifetime. He was sealed inside a staff and guarded for thousands of years in Rota until the present time.

An oft-mentioned Professor who specializes in Gyarados. He may have had history with manly men trying to adapt to mundane solutions.

Giver of gifts around the world.

Ash's Squirtle's former gang. A band of Squirtle abandoned by their trainers who went around causing trouble in Vermillion City.

Click here to see his current self (spoiler alert) 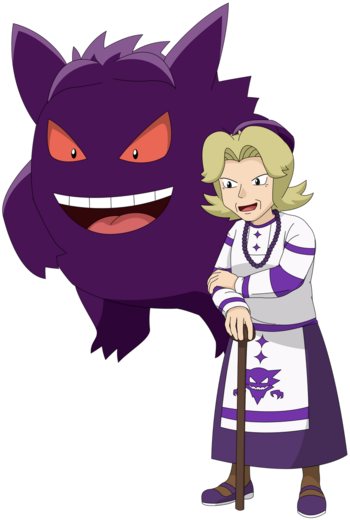 Agatha's younger brother, who died in Drowning Woods at age nine. His soul was reborn as a Gastly and he grew to become Agatha's main Pokémon later in life.

A Gastly who visits the Maiden's Peak during the End of the Summer Festival, working to keep old legends alive and earn a few bucks on the way.

The Ghost Trio from Lavender

A trio of Ghost Pokémon formed by a Gastly, Haunter and Gengar who used to live in the Lavender Pokémon Tower until they were driven out.

The President of the Pokémon League Competition Comittee.

The son of Giovanni and Ariana.

This Pokemon is said to be the creator of the known universe. At the beginning of the story, he sends Ash back in time so he can stop Cyrus from destroying reality.

A Legendary Pokemon from Johto. Considered the "Guardian of the Skies", and the creator of Entei, Suicune and Raikou. It used to reside at the top of Mount Silver before Falkner attempted to capture it.

The Legendary Ice Bird From Kanto. At least one makes its home at the Seafoam Islands.

The Legendary Thunder Bird from Kanto.

The Legendary Fire Bird from Kanto. Decades ago, it was seen in the Indigo Victory Road, rescuing a young Blaine when he was lost. More recently, it was seen in One Island, where it fought against Silver and his Salamence to a stalemate.

A Legendary Pokemon from Johto. Considered the "Guardian of the Seas", and the creator of Moltres, Zapdos and Articuno.

A Legendary species with the power to travel through time. There are at least two separate ones, one female, and one male.

The alleged ancestor of all Pokémon. It is rumored to have been born on Faraway Island.

The sibling guardians of Alto Mare, known as the Eon Duo. They can turn invisible at will.

The Dragon Lord of the skies from Hoenn, who stopped Groudon and Kyogre's rampage in ancient times. It is worshipped by the Draconids.

An artificially-engineered Pokémon created from the cells of Mew, and designed to be the strongest ever.

One of the Legendary Beasts from Johto, resurrected by Ho-Oh centuries ago. Known as the Spirit of Lightning.

One of the Legendary Beasts from Johto, resurrected by Ho-Oh centuries ago.

A girl whom Ash faces in the first preliminary round of the Indigo League. Her family owns a construction business.

A veteran trainer who relishes in beating down rookies in the Pokémon Leagues. He faces Ash in the second preliminary round.

A trainer hailing from Maroon Island in the Orange Islands, who faces Ash in the fourth preliminary round. Given that he's obtained most, if not all of his Pokémon through Wonder Trading, he's still trying to figure out their abilities through trial and error.

A trainer from the Alola region who is seemingly interested in finding (and catching) Ho-Oh. He's set to be Ash's opponent during the sixth Indigo League round.