A Mr. Mime who sticks around the Ketchum household, helping Delia with cleaning duties and work at the restaurant.

Kanto's local Pokémon Professor. His research has contributed hugely to advances to make the world a better place for humans and Pokémon alike. 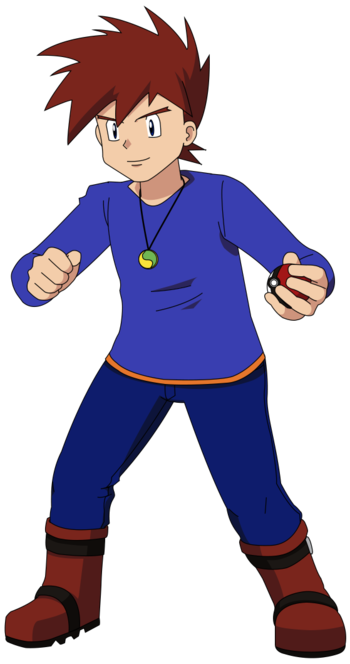 Professor Oak's grandson, and Ash's childhood friend and rival. They started their journey at the same time. 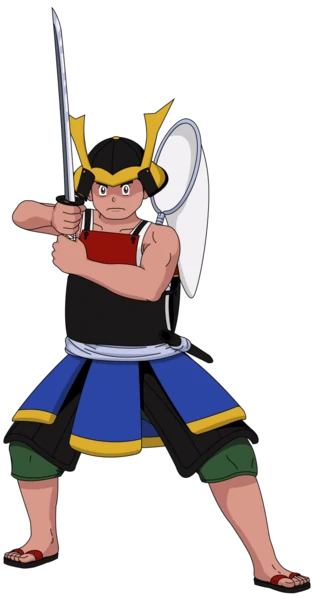 An unnamed trainer dressed like a samurai who specializes in Bug-Type Pokemon.

A young trainer from Kanto, who sought to attain a 100-win streak before challenging gyms. He chose Ash as his 100th opponent, but lost. Despite this, the two part on friendly terms, developing a degree of respect for one another.

A trainer from Pewter city who intends to become a coordinator in the future. 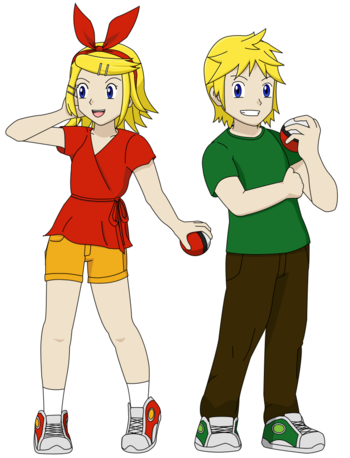 Half-Identical Twins that Ash and Serena met at Oak's Summer Camp. Their father is an important politician, but they want to become trainers with their own strength.

A wandering trainer from Fuchsia City whose main Pokemon is a Marowak.

A talented, if eccentric, inventor who lives in Pallet Town. 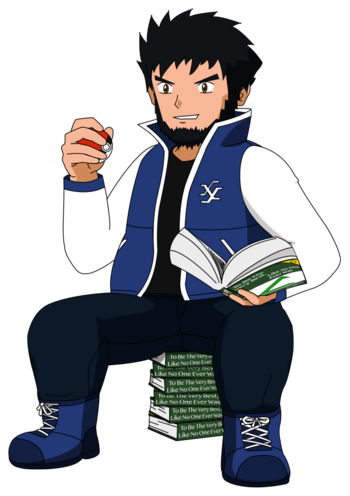 A former trainer and novelist who Gary meets during his oneshot.

A woman from Hop-Hop-Hop Town, and Arnold's mother.

A student from the Pokémon Tech trainer school, and considered the best of the Golden Generation. She is also the class representative.

A student from the Pokémon Tech trainer school. Being the less remarkable of the Golden Generation, he's easily picked on by his classmates.

A disguise in the original timeline, the reset of the universe turned her into a real person.

A ref at Erika's Gym. She originates from the Attack on Titan series.

A bug catcher from Turquoise Town, the same town Sabrina hails from.

A Dodrio trainer who works as a ranch hand, and wants to gain honorary membership into the Laramie clan, by winning the Big P Pokémon Race at any cost.

A trainer who is known for abusing his Pokémon, and abandoning them if they're too weak. Briefly owned Ash's Charmander and Misty's Horsea.

Lara Laramie's grandfather, and a veteran from the last Trainer-Ranger war. After being stranded on a deserted island with a Ranger named Jenkins, he came to understand and embrace the Ranger philosophy of "living in harmony with Pokémon", which in turn led him to create a Pokémon reserve.

Lara Laramie's parents, and current heads of the Laramie Clan.

Jeanette Fisher's parents, and current heads of the Fisher Clan.

A young Pokémon breeder, sanctioned by the Pokémon League to breed Bulbasaur for new trainers. She often also cares for injured wild and abandoned Pokémon.

A Wealthy Philanthropist whose efforts helped in making Gringy City a nice place to live in. Aurora's father.

A trainer who had to hold back on her journey after being left blind on her very first day. Was the original owner of Ash's Charmander.

The Old Man from Viridian City

An old master of the art of capturing Pokémon, and the Dude's grandfather. He too was the Dude of his time during his youth.

A veteran trainer who once fought Moltres to a stalemate. Ritchie's step-father.

A woman from Frodomar City. Ritchie's mother and Silver's wife. 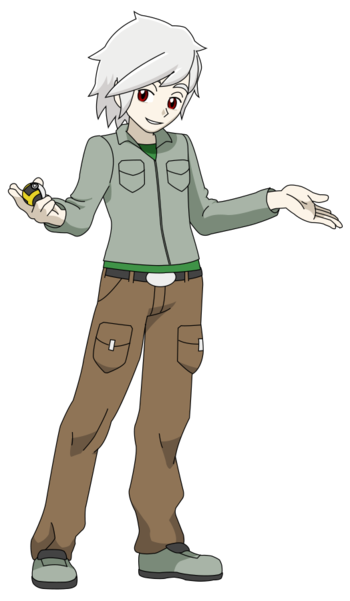 An aspiring trainer from Frodomar City with serious attitude problems.

Tommy Marshall aka The Kangaskhan Kid

A rich boy who got lost in the Safari Zone. He gets adopted by a Kangaskhan.

A Kangaskhan who took Tommy in after finding him lost and injured.

A veteran trainer who exiled himself in the mountains for years to train and become stronger. His encounter with Mizu leads him to rethink his mindset and seek out more of the outside world instead of sticking to one place.

Professor Oak's grandfather, and the greatest Pokemon Master who ever lived. Pallet Town was named after him for his achievements.

A Professor in archaeology. He's the one who took Eve in and gave her her name.

Triplets who live in Stone Town, and after their mother's passing, they've had to raise their younger brother on the last leg before he's ready to begin his Pokémon journey. Rainer competes in Leagues, Sparky in the Pokéathlon and Pyro in Pokémon Contests. They prefer using evolved Pokémon, especially those who evolve through stones.

The youngest of the Eevee brothers, who is still trying to decide what he wants to do now that he's old enough to be a trainer.

A trainer with four Pokémon leagues under his belt, aiming for a fifth one. The current uprise of talented rookie trainers has spurred him to seek them out to learn how to beat them in case one of them ends up as his opponent and kicks him out of the league early, as had happened the previous year.

A young entertainer who performs as an imitator with her Ditto, but also likes to battle on the side.

The socially awkward twenty-five year old heir of the Silph Company and a league competing trainer with several wins under his belt. Skilled with both battling and programming, the in-universe creator of the Upgrade that lets Porygon evolve into Porygon2. In-universe battles with weaker Beta Teams and stronger Alpha Teams.

A trainer who mostly specializes in Water-types, semi-finalist of last year's Indigo League. Has expressed interest in becoming the next Cerulean Gym Leader.

A semi-finalist from last year's Indigo League. She's an orphan who pays for her home with her League winnings.

A young boy from Vermillion City, who wants to find and capture Mew.

A young girl from Vermillion City, daughter of Professor Cerise.

The Pewter City's gym leader, who specializes in Rock-type Pokemon.

Misty's older sisters, and the Cerulean City Gym leaders, who specialized in Water-type Pokemon. They're known for being extremely weak and easy to defeat leaders, since they are performers rather than trainers.

Fuchsia City's Gym leader, who specializes in Poison-type Pokemon. Recently inherited the position of Gym Leader from her father Koga.

Former leader of the Fuchsia Gym, and current head of the Fuchsia Ninja Clan who specializes in Poison-type Pokémon. He's currently aiming for an Elite Four spot.

Viridian City's Gym leader, who specializes (mostly) in Ground-type Pokemon. He's also secretly the Leader of Team Rocket. See the Team Rocket folder on the Villains page for his tropes.

One of Kanto's Elite Four, who specializes in Ice and Water-Type Pokemon. Misty idolizes her.

One of Kanto's Elite Four, who specializes in Fighting-type Pokémon.

One of Kanto's Elite Four, who specializes in Ghost and Poison-Type Pokemon.

Kanto's current Champion, who specializes in Dragon-type Pokémon. Secretly works as part of the Pokémon G-Men.

The founder and main sponsor of the Battle Frontier. He's scouting skilled trainers to recruit as Frontier Brains with various battling styles, and oversees young trainers as potential challengers for the future.

A Star Ace of the Spectacle battle style of professional leagues.

A former teacher in the Pokémon Tech trainer school of Kanto. After seeing his best students being handily defeated by Ash and Misty, he accepts Scott's offer to enter the Battle Frontier, representing the Smogon battling style.

A Queen of Fortune, known as the strongest in the All Force battle style, more common in underground battling. Has a fondness for serpentine Pokémon and squinty eyes.

Obito the Teleporter and Feng of the Beedrill

Ancient ancestors of Koga and Janine, who fought during the Second Ninja Wars. Obito was a Bloodliner capable of teleportation, and Feng was known as a Mega-Evolution master. Obito died without siring any children, while Feng's lineage continues to live on to the present time.

Founder of the Fisher Clan, and Jeanette Fisher's ancestor. Won many battles thanks to his unmatched (at the time) knowledge of the Victreebel evolutionary line, due to being a Victreebel Species Bloodliner.

A young woman from Kanto Village. She was Sir Aaron's lover in his lifetime, thus making her Ash and Delia's distant ancestor.