Jessie, James, Meowth and their Pokémon

The Terrible Trio from the original timeline. Giovanni assigns them to keep an eye on Ash and inform him of his activities and progress.

The Leader of Team Rocket and Viridian City Gym Leader.

Jessie, James and Meowth's rivals, who sometimes are more successful in their endeavors.

A Rocket agent who reports to Giovanni directly.

A Rocket Admin in charge of overseeing operations in the Sevii Islands.

A scientist working for Team Rocket.

A old Unovan criminal associated with Team Rocket. Very strongly hinted to be the father of Team Skull admin Plumeria.

The leader of Team Zenith

The leader of Team Aqua, who seeks to change the world by expanding the ocean.

The leader of Team Magma, who seeks to change the world by expanding the land.

The Team Galactic Leader, who, after disappearing in a vortex, somehow managed to gain control over time and space. After mastering his new powers, he proceeded to dismantle the universe and rebuild it according to his vision. To prevent this, Arceus chose Ash and sent him back in time, setting in motion the events of the story.

Appears in: The Wild Boy from Sinnoh

A Team Galactic Scientist and Admin.

The youngest and most loyal of Team Galactic Commanders.

Appears in: The Wild Boy from Sinnoh

The CEO of Lysandre Labs, who's also secretly the Leader of Team Flare. Alain's benefactor.

The Leader of Team Skull. Unlike most leaders, he specializes in Bug-Type Pokemon.

Head Admin of Team Skull, who specializes in Poison-Type Pokemon.

A Skull Grunt and Bloodliner. Sketch is able to generate paint at her finger tips. The best graffiti artist in Team Skull.

A Skull Grunt. Not that smart.

A female Skull Grunt who has some pretty weird delusions.

One of the main scientists of Team Cipher in charge of turning Pokemon into Shadow Pokemon.

A trainer from Orre who joined Cipher in search for stronger opponents to fight.

One of Cipher's Admins and scientist in charge of the XD Shadow Pokemon series. She owns a Shadow Delcatty.

A Cipher Peon from Unova who joined Cipher out of desperation. He owns a Servine named Sir Thorn.

A Cipher commander assigned to attack the Kalos Ninja Village in search for information about Bond Phenomenon and stealing Froakie eggs.

A Cipher admin assigned to capture Celebi after its energy signature was detected in Vien Forest of Almia.

The leader of Team Snagem, hired by Team Cipher to steal Pokémon for them.

A member of Team Snagem.

A group of female bloodliners who lost their families, either because they died or because they kicked them out of their homes. They have no qualms about using their powers to get what they want. Coming to despise humanity and the world in general, they choose to follow their own rules.

The leader of the group, and after her resemblance to Ash was pointed out to her, decided she liked the idea of having a brother.

Casted out by her father after he discovered she was a Bloodliner, his murder attempt set Belladonna and Ash on a collision course. 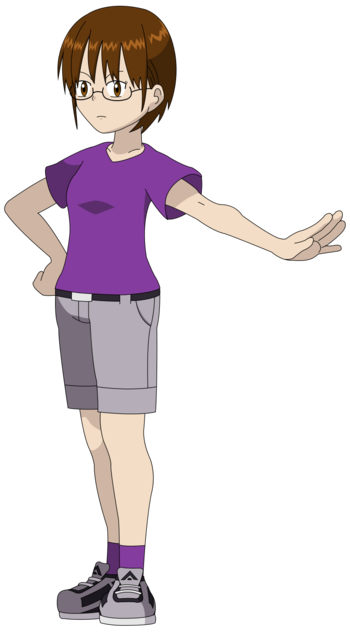 A short girl who is best with technology among her group. 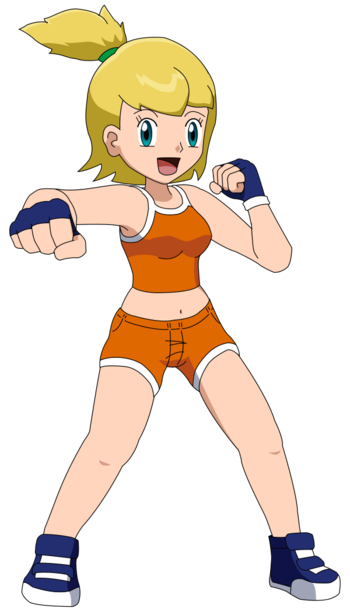 The only one of the group that had a genuinely good parent. Dresses like a Battle Girl.

The Bloodline King and his Organization

A mysterious individual seeking world domination, apparently through building an army of Bloodliners.

A servant of the Bloodline King, who apparently travels around searching for potential material to expand their ranks.

A servant of the Bloodline King, and apparently brother of the Emissary.

The eldest son and first child of the Bloodline King and his heir. Hilda works directly under him.

A observer of the Fuschia Tag Tournament and of Bloodliners. A Zoroark Bloodliner.

Appears in: Main Story
A Gardevoir Species Bloodliner and ally of Hilda as another follower and lover of the Bloodliner Prince.
Supernatural Villains

A remnant creature from the old timeline, who seems to enjoy tormenting Ash.

A glitch entity originated from MissingNo's constant travels across the timeline, with similar abilities.

Two ghosts that haunt the Old Chateau in the Eterna Forest, a little girl and a butler. They lure their victims to their place and keep their existence in the world of the living by draining their life force.

The Brothers in General

The sons of an infamous criminal from Orre. Only one of them managed to get away from her abuse, with the other six eventually killing her off and becoming notorious criminals themselves. They made an agreement of not to rat the others or having any children, lest that the legacy of their mother resurfaces, though it's clear that one of them is not respecting the latter part.

The Mother of the Seven Criminal Brothers/Heratia

A infamous criminal from Orre and the mother of seven sons, six of whom went on to commit crimes. She is long dead by the start of the story, but her legacy is present in the form of her criminal sons.

The oldest of the seven brothers.

The second oldest of the Seven Brothers from Orre.

The second youngest of the Seven Brothers from Orre.

The youngest of the Seven Brothers from Orre, father of Ash Ketchum and all the rest of his siblings. The only one to inherit his mother's bloodline.

A former student of the Tower of Mastery alongside Gurkinn, who betrayed the Tower and the city itself to help Heratia. The father of one of the brothers.

One Eye and his Crash

A group of Pokemon that swore revenge on humans after suffering abuse or being abandoned by them. They consist of a Rhydon, who is their leader, and an Electabuzz and a Lickitung.

Nidoking of the Safari Zone

A tyrant of a Pokemon who is responsible for Tommy getting stranded in the Safari Zone.

Gengar of the Drowning Woods

An evil and sadistic Gengar that rules the Drowning Woods.

A Shiny Aegislash who goes on killing sprees, and later teams up with Accentus.

A hunter-for-hire who takes jobs of stealing rare and valuable Pokémon for her clients.

A man who went on to terrorize the coast of Johto with his army of Gyarados, and the reason for the currently set six active Pokémon limit for trainers.

William Stronger AKA The Bloodliner Hunter

A former priest turned Serial Killer who targets bloodliners, convinced that he's on a divine mission to save the world from them.

A collaborator of William Stronger, who provides him with intel about his victims and Pokémon to use in his hunts.

Neko Hachi AKA The Black Arachnid

An infamous Phantom Thief from Catallia City in Johto.

A pirate captain who makes a living catching rare Water Pokémon. He works for the Phantom.

A professional hitman, considered the best in his line of work in the underworld.

A Unovan mercenary, hired by Pokémon smugglers to assist in their dirty business.

An assassin who once bore the title of the Pride Sniper, until he passed it down to the one who took him out.

Appears in: Shadows of the Jungle

A teenage girl living in a Guyana rainforest. She is able to command Bug-type Pokémon, and is apparently worshipped as a Goddess by them.