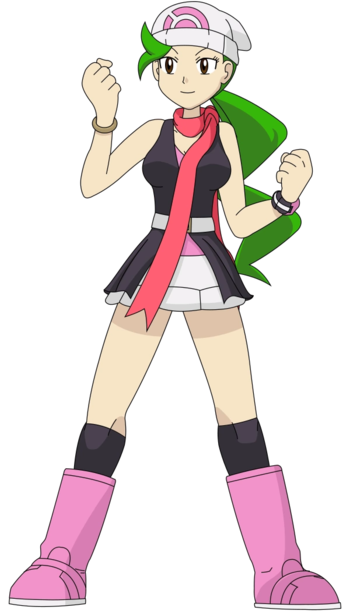 Appears in: Main Story (appears in a dream sequence) | Argenta Interlude | The Wild Boy from Sinnoh

A young man from Sinnoh who grew up in the wild, raised by a family of Pokémon and a researcher named Kaisei.

The local professor of Sinnoh region. According to some people, his standards for giving Pokedexes are not as high as other professors.

A former Coordinator from Sinnoh, and Dawn's mother. Her whereabouts are currently unknown.

A mysterious trainer who uses Legendary Pokemon. He fought Casey Snagem during his Sinnoh Run and is considered the peak of Sinnoh power creep.

A trainer from Sinnoh who prefers Electric-type Pokémon. Looks up to Volkner and seeks to become a great Electric-type specialist like him by challenging others.

A treasure seeking young woman and friend of Gardenia.

Appears in: Looker Interlude (Flash Back) | The Wild Boy from Sinnoh

A young recruit of the International Police, and Looker's partner during their mission in Sinnoh.

Appears in: The Wild Boy from Sinnoh (mentioned) | Looker Interlude (mentioned and image on articles)

A young freelance researcher who has collaborated with Pokémon Professors, widely respected thanks to his knowledge about Legendaries.

The assistant of Prof. Newton Graceland, interested in finding the Distortion World.

A Ice-type Trainer from Sinnoh and a former student of the Snowpoint Gym.

A veteran Pokémon Researcher. Became Cynthia's mentor after she saved her and her archaeologist team of a hostile Spiritomb.

One of Sinnoh's Elite Four, who specializes in Fire-Type Pokemon. He's also childhood friends with Volkner.

One of Sinnoh's Elite Four, who specializes in Ground-Type Pokémon.

Sinnoh's current champion. A passionate treasure hunter and adventurer since she was a child.

A veteran trainer and former Sinnoh champion. Comes out of retirement in response to seeing too many trainers adhering to Smogon tactics in the latest Lily of the Valley tournament.