A trainer from Alola who has come to Fuchsia's Safari Zone in order to reintroduce the endangered Mudbray/Mudsdale line to the wild.

A youngster from Alola who took part in a Johtoan tournament. His starter is Alolan Rattata.

The future Trial Captain of Akala Island. He specializes on Fire-Type Pokemon. His grandfather Koa used to be a Kahuna. 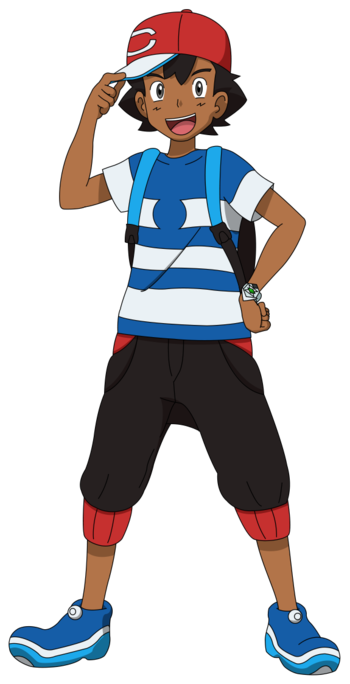 Velvet's twin brother and a classmate and (friendly) rival of Kiawe at school. He prefers to go by Frax. 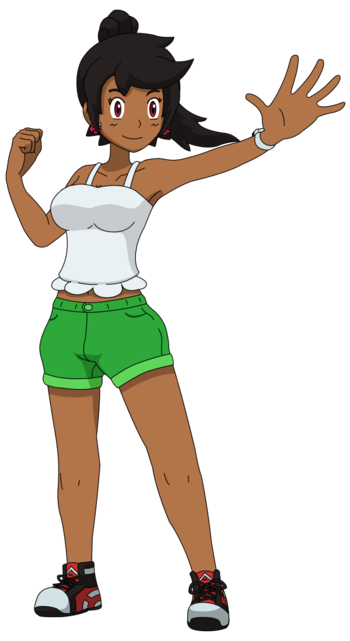 A classmate of Kiawe, Frax, and Velvet. She specializes in Water-Type Pokemon.

A classmate of Kiawe, Frax, and Velvet. She specializes in Grass-Type Pokemon.

A classmate of Kiawe, Frax, and Velvet. He specializes in Electric-Type Pokemon.

The mother of Frax and Velvet. A store clerk.

The local Pokémon Professor of Alola, and a teacher in Melemele's Pokémon School.

Samuel Oak's cousin, and the Principal of Melemele's Pokémon School.

The Bewear from the Anime, just as clingy as ever. Has 'adopted' Gladion.

The latest descendant of the royal family of Alola descended from Kamehameha, honorary niece of Nanu. In an alternate timeline, she continues to rule Alola as Queen.

A Cosmog, an Ultra Beast capable of teleportation.

Trial Captain of Poni Island, who specializes in Fairy-Type Pokemon. She's an artist.

The future Kahuna of Poni Island, who specializes in Ground-Type Pokemon. Is of farm folk.

The Kahuna of Melemele Island, who specializes in Fighting-Type Pokemon. He has a grandson who is fond of Malasada.

The Dark Type Kahuna of Ula'ula Island. Fond of Alolan Meowth. He's also an Honorary Uncle of Trial Captain Acerola and a former member of the International Police.

The Kahuna of Akala Island, who specializes in Rock-Type Pokemon.

Kiawe's grandfather, and the predecessor of Olivia.

A guardian entity that protects Melemele Island. It is known for causing trouble for Hala.

Aether Branch Chief and Scientist. Not all that popular.

Assistant Aether Branch Chief. Very popular. She was born in Fiore before moving to Alola. The aunt of Zilant via her older sister Pia.

Aether President. The first person known to be affected by Nihilego toxin. Gladion and Lillie's mother.

An ancient king of Alola, who set up the basis for the region's modern society and culture. Created the Z-Crystals.

An ambitious man who sought to establish himself as the pinacle of power in Alola, conspiring to murder King Kahele and his entire family to erase his lineage, plumetting the islands into a bloody civil war.