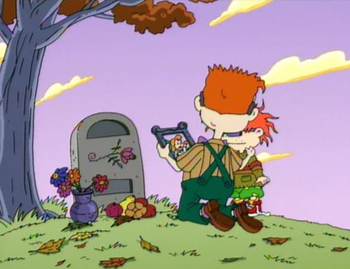 "And the good guy doesn't have a mommy, 'cause his mommy died."
— Zoe, Baby Blues
Advertisement:

Missing Moms are considered more unusual than missing fathers, and they are more likely to have their absence explicitly explained (usually with death). This might be because a man can technically leave his baby-mama at any time after knocking her up (or she can leave him), but a woman carrying a child to term, giving birth, and then abandoning them, is rarer. As a result of this, Missing Moms are more likely to be remembered positively than Disappeared Dads (although see First Father Wins): the father will wax poetic about her character and the times they shared, Happier Home Movies will be found throughout the house, and those that knew her will affectionately tell the female (or sometimes male) protagonist "You look so much like your mother." This beatification also paves the way for a Wicked Stepmother if the father remarries — where the new, cruel 'mother' is contrasted with the saintly dead one.

Death by Childbirth is very often the cause of a Missing Mom, as not only does it get the mother out of the way whilst keeping her sympathetic but it adds an extra touch of tragedy to the protagonist's life. By contrast, if the Missing Mom is alive and willingly abandoned her child, she will probably be portrayed as worse than an absentee dad.note Except in some period stories — before the 20th century, children of divorced or legally-separated couples were invariably awarded to the father.

However, the flip-side is that if both parents are absent, the character is far more likely to be obsessed with his or her lost father. Characters who have lost both parents often do not mention the lost mother at all. Missing Moms in general are likely to get a brief mention as to what happened to them, but are far less likely to turn up again in the story and/or be a driving force behind a hero's adventures.

Unbelievably prevalent in pre 1970s American television, where it was frowned upon to talk about divorce. Most plots to stick to a two-at-a-time one-off character scheme where writers would find it hard to write for both parents and usually limit themselves to the one who is relevant. Such plots generally involve a less-than-ideal parent and a troubled child and the one parent who could solve the conflict is dead or absent, with the mom or dad being the toss-up depending on the gender of the child. Sometimes subverted if the one-off characters actually return and the absent parent does get a chance to drop in, or the Parent with New Paramour trope is invoked to fill the missing piece.

Combine with Disappeared Dad, and you get Parental Abandonment. For the inverse, see Missing Child. If the mother's absence is never explained or even acknowledged, you've got the Ambiguously Absent Parent.

The episode was funny but the ending takes a somber tone.

Example of:
The Ending Changes Everything

The episode was funny but the ending takes a somber tone.