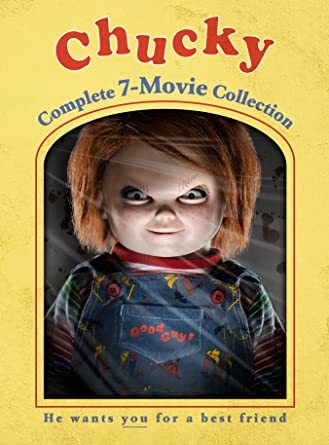 "You know what they say; you just can't keep a Good Guy down!"
"Don't fuck with the Chuck!"
Advertisement:

Child's Play (also known as Chucky) is a series of villain-based horror-comedy slasher films that consistently feature Chucky (Brad Dourif), a Creepy Doll who actually contains the soul of a notorious serial killer Serial Killer named Charles Lee Ray. The films follow Chucky's exploits as he leaves behind a trail of deathly mayhem and confusion in his search for a new human host, in addition to a rotating set of protagonists (who are also the only ones who know of Chucky's true nature) and their efforts to stop him.

Don Mancini, creator of the Chucky character, has written every installment to date, and he made his directorial debut in the franchise with 2004's Seed of Chucky.

Not to be confused with the charity or the Bill Cullen game show.

Films in the Child's Play series:

The original trilogy, which began in 1988, includes:
Advertisement:

Due to unfavorable reaction of the third film, a fourth installment was put in Development Hell until 1998, which saw the release of a new film with a wildly different tone and a clear emphasis on the Chucky character:

When Seed of Chucky forced the franchise into yet another rut, Mancini decided to bring Chucky back to his horror roots with a new era of Direct to Video films:

In 2018, it was announced that MGM was producing a Continuity Reboot of the original film —without Don Mancini or Brad Dourif's involvement— as the studio still owns the original Child's Play title and concept. The reboot was released the following year.

Also in 2018, an eight-episode TV series named Chucky was announced as being in development with franchise creator Don Mancini and producer David Kirschner, following the continuity of the original 7 films and with Dourif reprising his role as Chucky along with Jennifer Tilly, Alex Vincent and Fiona Dourif. It will be aired on USA/Syfy in 2021.