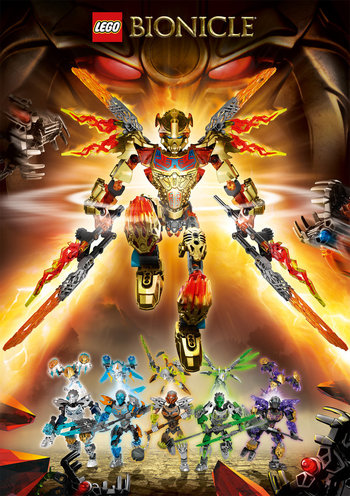 The Toa as the Uniters
The main protagonists of the story that can control the elements and have no memory of they are. Called from the stars above through the Mask of Time, their destiny is to save Okoto and protect the island from various threats such as Makuta, the Skull Creatures, and Umarak.
Advertisement:
Tahu

The self-proclaimed leader of the Toa, and Master of Fire, Tahu is one of the more aggressive members of the team, as befitting of his element. As a result of his ego, he's not the most popular of the Toa, but he ultimately has a noble heart that allows him to unite with Ikir. Likewise, his self esteem isn't necessarily unwarranted, either.
Kopaka

The Toa of Ice and Tahu's natural rival, Kopaka has a strict moral code and takes his duty as a Toa seriously, insisting on acting appropriately reserved and heroic. Despite the strictness this gives off, Kopaka will show off a far more casual and fun-loving manner when not in the presence of others.
Onua

The leaders of the six villages, they have limited control over their respective elements.
Mask Makers