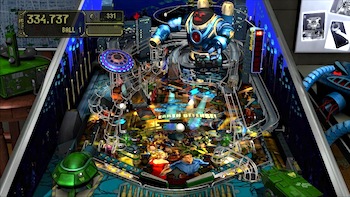 "Earth Defense", one of the original Zen Pinball tables.
Advertisement:

are a series of games for playing Digital Pinball Tables by Zen Studios. Most of the gamesnote except for Zen Pinball: Rollercoaster and Zen Pinball: Inferno are frameworks where players can purchase and download new pinball tables over time. The games support features such as local and online multiplayer play, slow motion, mid-game saves, and online leaderboards and tournament competitions.

Despite the name differences, the games are fundamentally the same; "Pinball FX" was previously only used for games on Microsoft systems, while "Zen Pinball" was for versions on other platforms. After the release of Pinball FX 3, the "Zen Pinball" name has been discontinued and now all platforms with the latest game use "Pinball FX". Most of the tables are available for both series.

The first title in the series was Pinball FX. It was published by Microsoft Game Studios on Xbox LIVE Arcade in 2007, and initially came with three tables ("Speed Machine", "Agents", and "Extreme"). Six other tables were released later as downloadable content.

In 2008, Zen released the first Zen Pinball games, Zen Pinball: Rollercoaster and Zen Pinball: Inferno. They were games for Apple's iOS devices, and unlike the other titles in the series, these were standalone apps with no facility for downloading additional tables.

In 2009, Zen released Zen Pinball on the Play Station Network, making it the first pinball game on the PlayStation 3. It came with four tables ("Earth Defense", "El Dorado", "Epic Quest", and "Excalibur"), with others released later. The game was subsequently released on Android devices as Zen Pinball THD and the Nintendo 3DS as Zen Pinball 3D in 2011. A version of Zen Pinball was also released for iOS devices, with proper support for downloadable tables.

Pinball FX 2 was released in 2010 for the Xbox 360, then later Windows 8 in 2012 (which was revamped in October 2014 after being neglected), Steam in 2013, and Windows Phone will have it at some point in the future, while Zen Pinball 2 was released in 2012 for the PlayStation 3 and Play Station Vita, then later Wii U and PlayStation 4 in 2013. These are upgrades to the original titles, with an improved game engine and support for more features. The games are backwards compatible with the originals, allowing owners to import their tables.

Pinball FX 3 was announced June 28, 2017 and released on September 26 for PlayStation 4, Xbox One, Windows 10 and Steam, with the Nintendo Switch version arriving on December 12 that year. This version focuses more on multiplayer matchups, league play, and tournaments, as well as the addition of new single player modes and features.

On September 4, 2018, Zen Studios announced that they had secured the rights to the Williams Electronics and Bally library of pinball tables, taking over from the previous license holders FarSight Studios* makers of The Pinball Arcade. In contrast to their original tables, the Williams digitalizations play as close to the original physical tables as possible. However, there is also the option to play versions of the tables with extra eye-candy in the vein of Zen's original fare. Volume 1* (consisting of Fish Tales, Medieval Madness, The Getaway: High Speed II and Junk Yard) was released October 9, 2018 for all supported platforms after a Steam-exclusive public beta period during the previous September.

Zen's pinballs tend to be Licensed Pinball Tables, with properties from popular Comic Book and Science Fiction assets. Although the playfield physics are realistic, the games also feature liberal use of Video Game-only effects, such as wandering enemies to be destroyed with balls or attention-grabbing animations over the playfield.

Note: As new Works pages are created for the various Zen Pinball tables, be sure to add them here and on the Digital Pinball Tables page.

The following pinball tables are currently available for the various Pinball FX and Zen Pinball games:

Tables that are currently available on Zen Pinball Party:

Tables that were previously available for Pinball FX and Zen Pinball games: