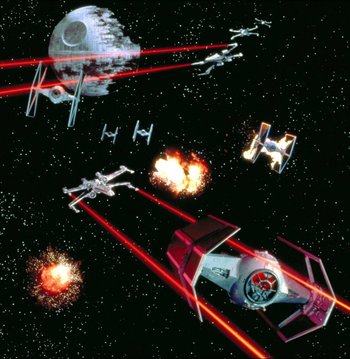 An Old-School Dogfight is a type of close-combat battle between fighter craft where each attempts to maneuver behind the other in order to shoot them down. In essence, it's a three dimensional version of Chasing Your Tail, where both parties are armed with a Fixed Forward-Facing Weapon, making it necessary to be behind their target in order to attack. In Real Life, this form of combat is limited to fighter planes, but fiction is less restricted — it can show up not only with Cool Planes, but Space Fighters, submarines, and even tunneling vehicles like Drill Tanks. Any time a 3-D environment or 2-D Space is combined with Fixed Forward Facing Weapons, you can expect to run into old school dogfighting.

The reason it's called an "old school" dogfight is because it doesn't actually happen very often in real life anymore. While it was the standard form of air-to-air combat for decades, the introduction of reliable, long range guided missiles means that most modern air combat is now fought well beyond visual range. Old school dogfights can still involve the use of missiles, though — they'll just be much shorter ranged than their real life equivalent, and have to be fired from behind in order to have a chance of hitting.note This was Truth in Television for certain types of missiles, but isn't anymore.

However, dogfights are cool. More importantly, dogfights look cool, in a way "Shooting down something you can't even see" isn't. Hence this trope. The characters involved in an Old-School Dogfight will frequently be Ace Pilots with Improbable Piloting Skills, often have a Wingman and/or a Guy in Back, and will probably cover each other's six at some point. Old school dogfighting during an Airstrike Impossible is not out of the question. Overlaps with Space Is Air when done by Space Fighters.

Also see Standard Starship Scuffle, when it's the bigger spaceships duking it out.