Note: In the Taiwanese Hokkien language broadcasts, all male characters are voiced by Huang Huei-Fung 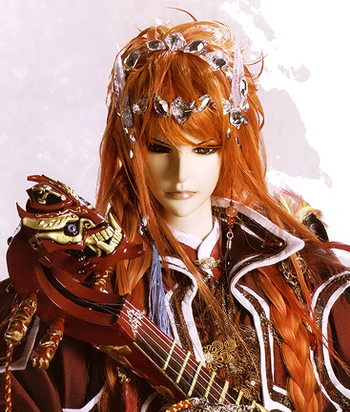 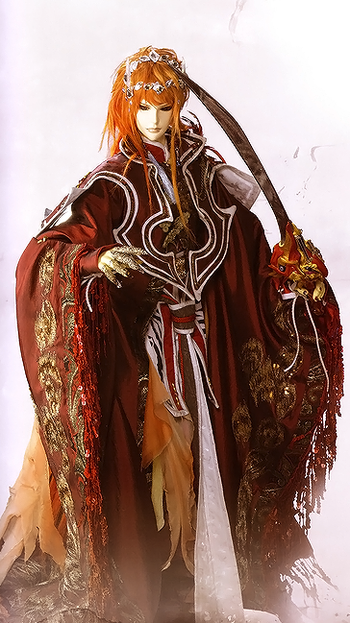 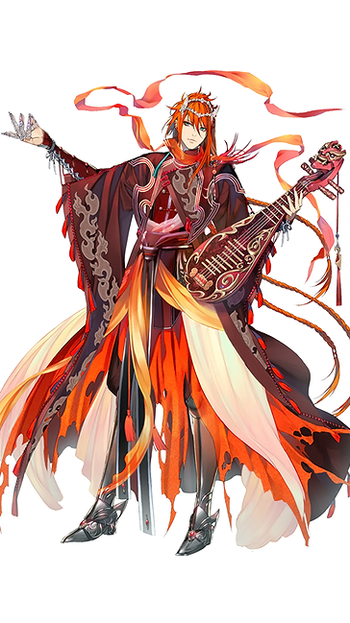 "The land is cloaked in deepest blue! The shadow of eagles across the moon! Let all the pain and scars now fade away into the past!"
Name: 浪巫謠 Làng Wū Yáo (ZH) / Rou Fu You (JA) / Wandering Sorcery Ballad (EN)
Title: 弦歌斷邪 Xián Gē Duàn Xié (ZH) / Genka Danja (JA) / Song That Dooms Evil (EN)note This is Crunchyroll's translation. A more direct translation would be "Stringed Slayer of Evil".
Weapon of Choice / Weapon Name: Ling Ya the Pipa
[See Ling Ya for further details.]
Discipline / Position: Musician
Date of Birth: February 22.
Voiced by: Takanori Nishikawa (JA), Liu Ming-Yue (ZH)
"筋為弦，脈為鼓，息如笙歌；以吾命，譜樂章，邪音不容。"
—"My muscles are strings, my heart a drum, and my breath a flute's whistle; my life is a harmony, and will not allow evil to play a discordant note."
A musician who is one of Shang Bu Huan's partners-in-crime from Xi-You. He uses his talking pipa Ling Ya to fight with, rather than a sword (though as revealed later, Ling Ya can also become a sword). His voice is said to be cursed, and most of the time Ling Ya is the one doing the talking.
Ling Ya 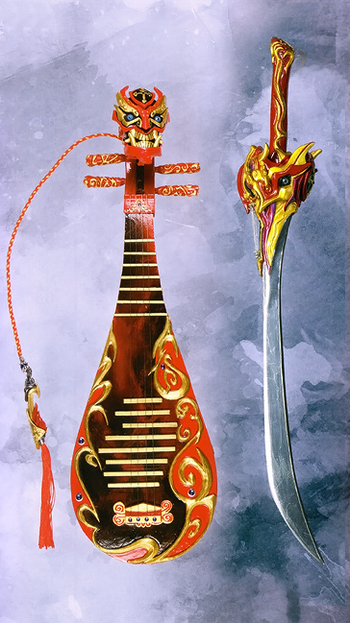 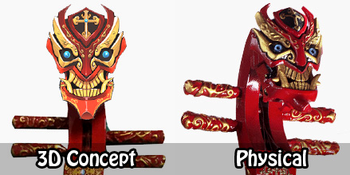 which can transform into a sword. 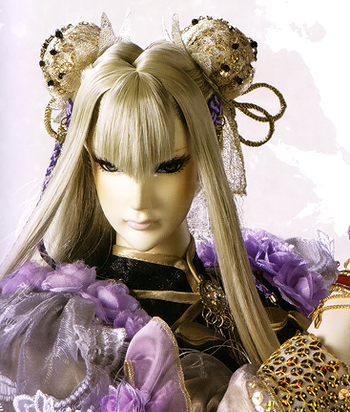 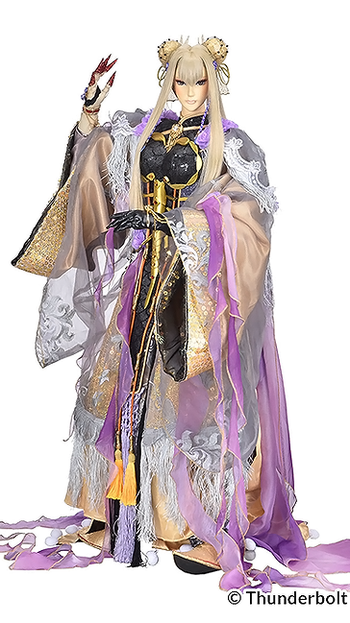 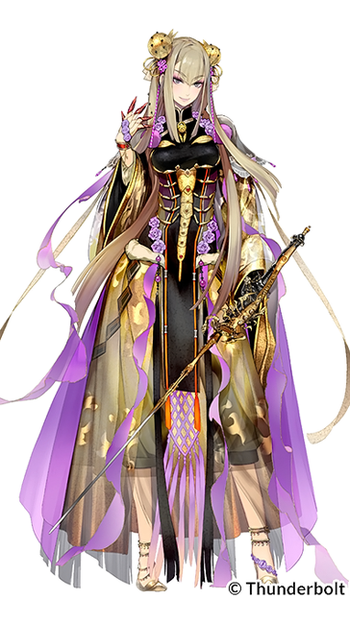 Name: 蠍瓔珞 Xiē Yīngluò (ZH) / Katsu Eiraku (JA) / Scorpion Necklace (EN)
Title: 蝕心毒姫 Shí Xīn Dú Jī (ZH) / Shokushin Dokki (JA) / Princess of Cruelty (EN)note This is Crunchyroll's translation. A direct translation would be "Corrupting Poisonous Princess".
Weapon of Choice: Sword, Poisonous Scorpions
Weapon Name: 荼蘼螫 Tú Mí Shì (ZH) / Dabiseki (JA) / Thimbleberry Thorn (EN)
Date of Birth: February 23.
Voiced by: Ayahi Takagaki (JA), Tong Xin-Zhu (ZH)
"劍上逐力競鋒芒，莽夫之浮誇；玉爪輕藏一點香，死亡之凝華。"
—"The pretense of clashing swords to prove might is humorous at best; a drop of poison on the tip of a needle, now that is the art of death at its finest."
An assassin and one of Huo Shi Ming Huang's subordinates. She jumps at the chance to track down Shang Bu Huan and the Sorcerous Sword Index in Dong-Li to prove herself to her master. She is an expert at poisons, and takes pride in their deadliness.
Xiao Kuang Juan 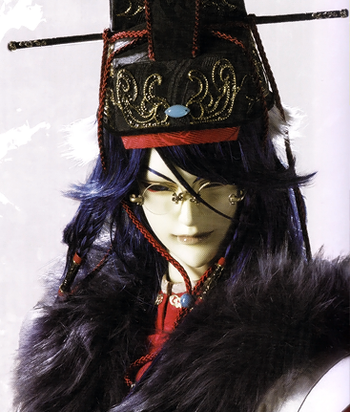 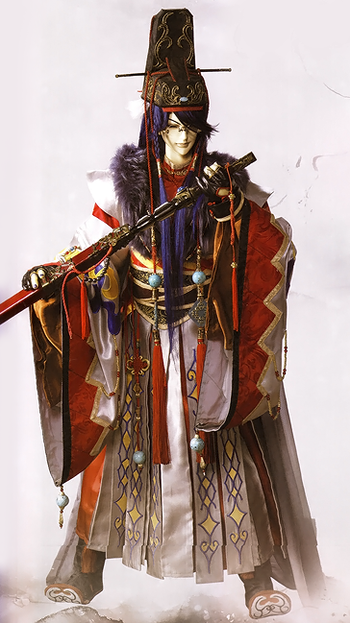 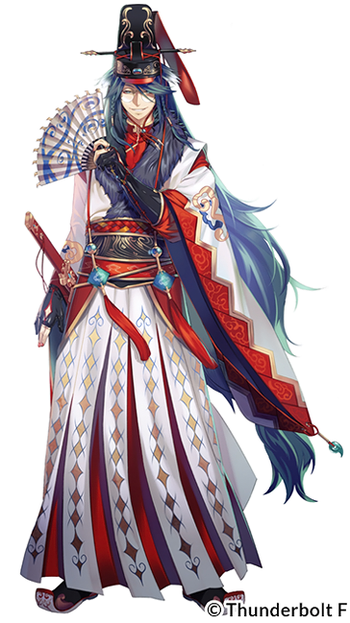 Name: 嘯狂狷 Xiào Kuáng Juàn (ZH) / Shou Kyou Ken (JA) / Roaring Wild Maniac (EN)
Title: 追命靈狐 Zhuī Mìng Líng Hú (ZH) / Tsuimei Reiko (JA) / Hunting Fox (EN)note This is Crunchyroll's translation. A direct translation would be "Life-Hunting Ghost Fox".
Weapon of Choice: Fan, Sword
Weapon Name: 冰焰不測 Bīng Yàn Bú Cè (ZH) / Hyouen Fusoku (JA) / Unexpected Frozen Flame (EN)
Date of Birth: March 7.
Voiced by: Tarusuke Shingaki (JA), Xue Cheng (ZH)
"巧唱忠義作誑語，世間無欲不成真。"
—"'Justice' is a powerful and magical word, and if you repeat it enough the world will bend to your whims."
A high-ranking officer in the Xi-You imperial court, responsible for tracking down the most dangerous criminals in the land. His target for several years has been Shang Bu Huan for his theft of the Sorcerous Sword Index from the imperial treasury, but he has his own self-serving reasons for seeking out the so-called "dangerous criminal".
Di Kong, a.k.a. Lou Zhen Jie 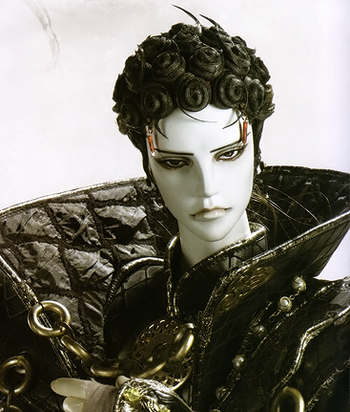 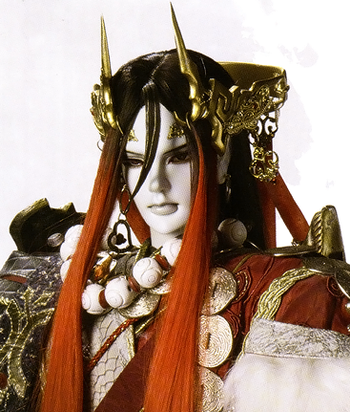 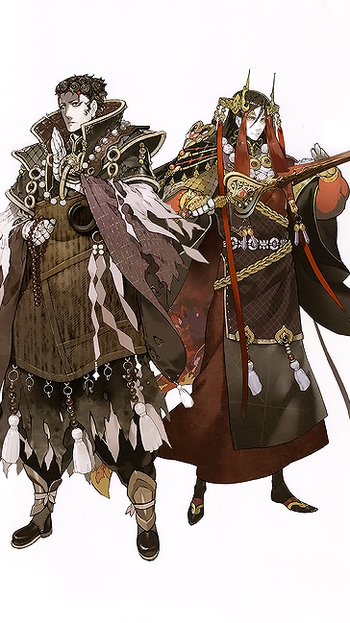 He becomes a vessel for the Seven Blasphemous Deaths, discarding his holy name and ways to fully embrace the sword's bloodlust. 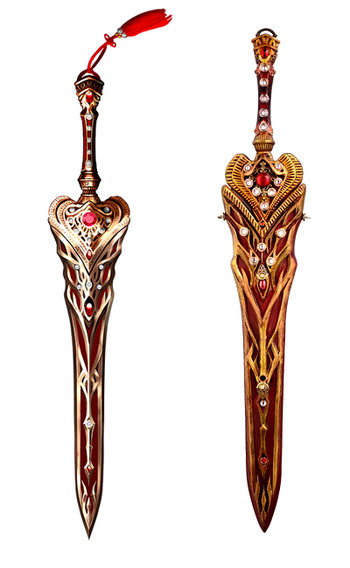 Name: 妖姬・七殺天凌 Yāo Jī—Qī Shā Tiān Líng (ZH) / Youki—Nanasatsu Tenryou (JA)note "Seven Blasphemous Deaths" is Crunchyroll's translation of the name. A more direct translation would be "Seven Slaughters Defier of Heaven".
Voiced by: Aoi Yūki (JA)
A dangerous divine sword from the Sorcerous Sword Index that has a malevolent spirit of its own. 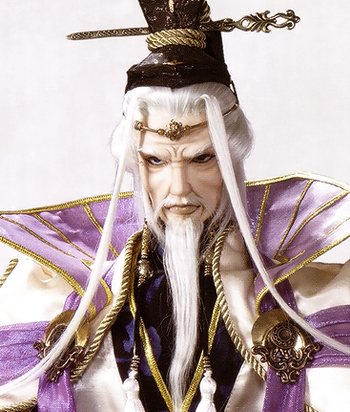 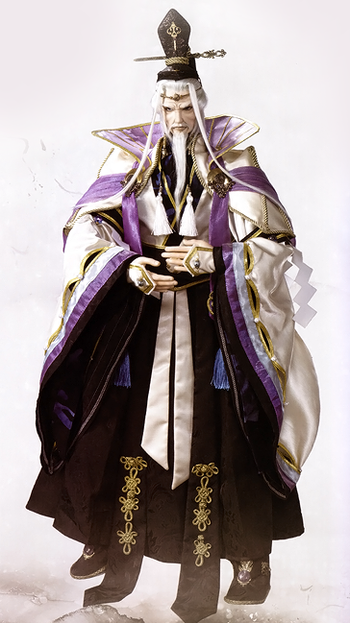 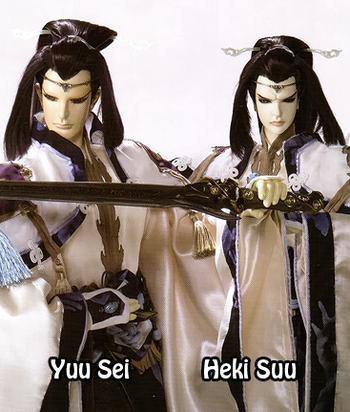 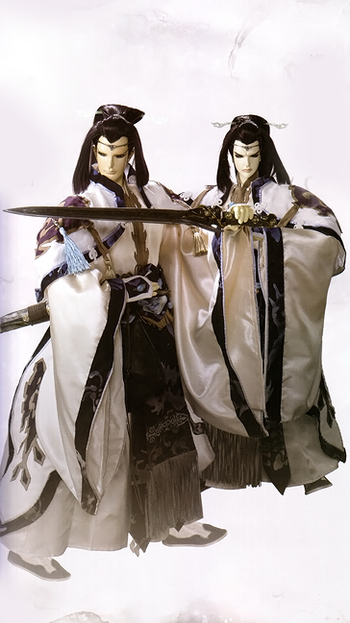 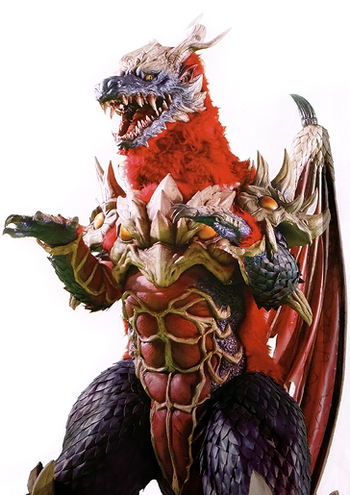