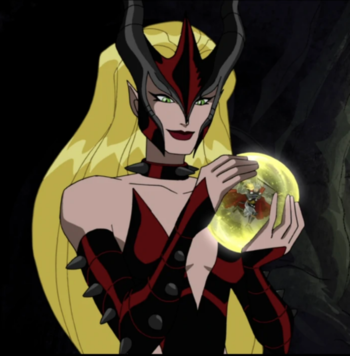 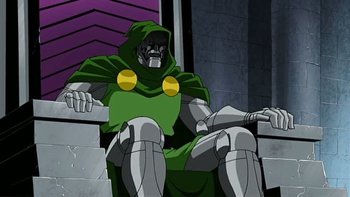 Voiced by: Lex Lang
First appearance: "The Private War of Doctor Doom"
(to the Wasp) "Miss Van Dyne, I am not some common criminal that can be distracted by your prattling. You are nothing to Doom."

Dr. Victor von Doom is the world's premier super-villain, a Tin Tyrant of a small Eastern European nation with a massive Inferiority Superiority Complex concealed by a megalomaniacal persona and aspirations to be a Noble Demon or Nietzschean Übermensch. Once the standoffish and contemptuous peer of Reed Richards in Empire State University, Doom was horribly scarred by the explosion of one of his own machines because he refused to listen when Reed pointed out an error in his calculations. With the damage to his visage dwarfed by the damage to his ego, Doom usurped his home country of Latveria and now seeks to Take Over the World and avenge himself on Reed Richards (whom he convinced himself was responsible for sabotaging his machine so it would explode) in order to prove his superiority to all. 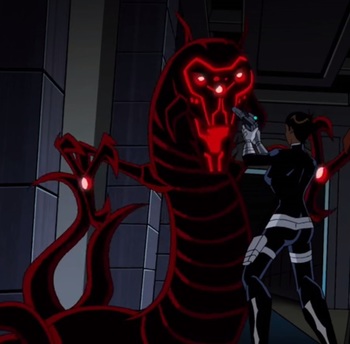 A nanotech parasite with the prime directive to consume and assimilate all other electronic technology into itself, in particular ARC Reactor tech. Imprisoned by Iron Man in the Vault, Technovore escaped during the Breakout. Later captured by A.I.M. following the fall of MODOC, Technovore was let free to run loose in Stark Tower after A.I.M. knocked out all power to the building. The purpose was for Technovore to home in on Tony Stark's ARC Reactor heart and eat it as vengeance for A.I.M.'s past defeats at the hands of Iron Man and the Avengers. 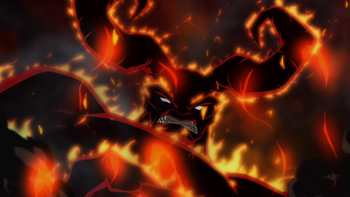 The enigmatic ruler of the Fire Demons from the realm of Muspelheim, Surtur formed an alliance with the Dark Elves of Svartalfheim long ago when they were in a war of extermination against the Frost Giants of Jotunheim. However, Odin declared war against the Dark Elves for allying with one as evil as Surtur and banished him back to Muspelheim, his sword remaining in Jotunheim. While Thor and Loki had a run-in with the Sword of Surtur long ago, none thought that Surtur himself would ever rise again until Baron Zemo used the Norn Stone of Muspelheim in "Acts of Vengeance" to hold off the Enchantress and the Executioner, forcing Wonder Man to sacrifice himself to prevent either Zemo or Enchantress from using its dark magicks. As a result, Enchantress was sent to Muspelheim and possessed by Surtur's evil, becoming his harbinger of destruction for the rest of Season Two.

The Kree in general

Once a horde of blue-skinned barbarians native to the planet of Hala, the Kree were first introduced to civilization by the then-peaceful Skrulls, who had the Kree and Hala's other native sentient species, the Cotati, prove their worthiness before them in a contest. Losing, the Kree slaughtered the Skrull envoy and the Cotati, using the exposure to Skrull technology to increase their standard of technological civilization, while never losing their militaristic and xenophobic nature. In time, the Kree genetically engineered themselves into a race of perfect warrior-scientists and created a biological supercomputer named the Supreme Intelligence from the conglomeration of the greatest Kree minds to lead them. Creating a warlike empire, the Kree never lost their enmity towards the Skrulls, focusing the majority of their efforts on wiping the Skrulls from the universe entirely. In reaction, the Skrulls adapted to the pressures of embattling the Kree threat to their existence and consequently became very much like them in ideology and tactics. Unfortunately, untold generations of Kree genetic engineering have reduced genetic diversity in their population to the point where evolution through natural selection is no longer possible. 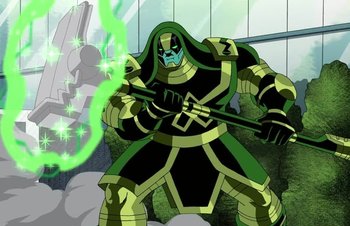 Ronan is the Supreme Accuser of the Kree Empire, who was sent to judge humanity's collective worthiness to join the Empire as a subject race in response to Captain Mar-Vell's advocacy for their survival. After being attacked by Captain Americanote actually a Skrull impostor trying to ruin the Kree's attempts to Take Over the World before the Skrulls do, the Avengers, and Ms. Marvel once it becomes clear that he does not come in peace, Ronan judges humanity worthy only of destruction, but he and the other Kree invaders, including the sympathetic Mar-Vell, wind up captured by S.W.O.R.D. and the Avengers and interred in the interdimensional prison 42. Eventually, Ronan is relocated to the brig in Hydro Base after the Annihilation Wave attacks 42, and he is broken out with the assistance of Kree black ops. 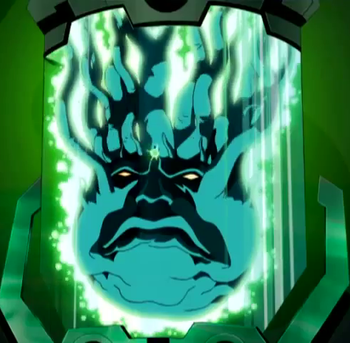 A biological supercomputer created by the Kree from data on the minds of the greatest Kree thinkers, but utterly lacking in any form of compassion or capacity for emotion. The Supreme Intelligence is interested at first in humanity's prospects of being included into the Kree Empire as a subject people, spying on them and attempting to prevent their attempts at space travel with Kree Sentries, but when Ronan the Accuser pronounces the whole of mankind to be worthy of extinction, only the Earth's solar system remains a matter of concern to the Supremor. Apparently, warping of spacetime in the Sol system's general region of space makes it a strategic transfer zone for Kree starships, as portals to and from there are more easily opened. The Supreme Intelligence seeks to knock out two birds with one stone by opening a portal in the corona of the Sun, both providing an easy access route for Kree starships into the Sol system and condemning humanity to death by threatening the Sun's destabilization. It is this event and its repercussions which would bring about the apocalyptic future that Kang the Conqueror tried to prevent by killing Captain America. 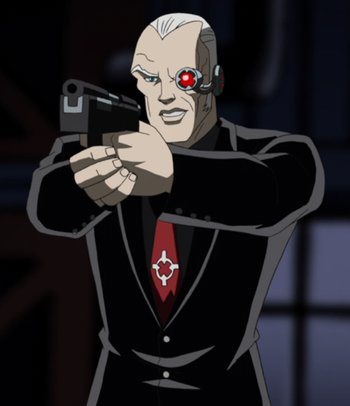 Voiced by: Neil Ross
First appearance: "To Steal an Ant-Man"

A crime boss who once hired Scott Lang to help him rob banks as part of his gang. However, Crossfire was captured, and Scott spent all the ill-gotten gains of their sordid enterprise to help his daughter Cassie get needed medical treatment for a rare disease. After getting out of prison, Crossfire assumed that Scott had merely hidden their earnings away and demanded his take, lest Cassie come to harm at his hands. This motivates Scott to steal Hank Pym's Ant-Man suit and Pym Particles and use them to attempt to rob banks (unsuccessfully), so Hank and the Heroes for Hire, originally out to identify the Ant-Man impostor, team up with Scott to rescue his daughter and let him keep the Ant-Man identity, provided Scott only uses it for good. 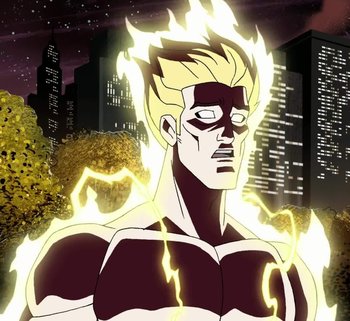 Michael Korvac was once just a normal man in a relationship with Corrina, a normal woman. Then, Korvac was abducted by the Kree, who subjected Korvac to inhumane poking and prodding and turned him both physically and psychologically into a disturbed monster. Korvac took his revenge on the Kree responsible for his pain, destroying their ship, a Kree space-station, and part of a planet. Korvac then undertook a single-minded quest to return to Earth and Corrina, pursued all the way by the Guardians of the Galaxy, who sought to take him into custody and make him face justice for the thousands he murdered. Reaching Earth before the Guardians could catch him, Korvac entered the protective care of the Avengers. This caused problems. 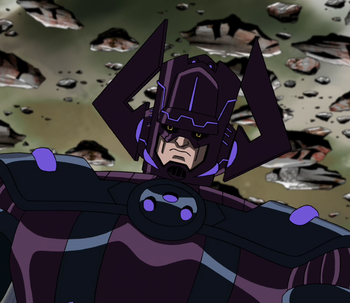 Galactus, the Devourer of Worlds, is a powerful cosmic being as old as the universe itself whose sole purpose is to consume the life energies of worlds to maintain balance in the natural order. A personified force of nature, Galactus needs no reason and cannot be defeated. His Heralds construct his life-siphoning machines on a given planet to drain the energy from it by converting its positive-matter into antimatter, which Galactus absorbs into his being. Some time ago, Galactus destroyed the Skrull Empire's capital, the planet Skrullos. Religious authorities reacted to the event by declaring that the Skrulls would be destined to find a new homeworld on Earth, which would become the new center of the Empire. Not long after Skrull and Kree ambitions regarding the Earth were separately thwarted, in large part thanks to the efforts of the Avengers, did Galactus himself descend on the planet, probably merely as a coincidence. Only the full forces of the Avengers, the New Avengers, the Fantastic Four, and the Heroes for Hire, as well as some other super-powered heroes, managed to defy the World-Eater, cementing the heroic legacy of the Avengers in stone for all time. 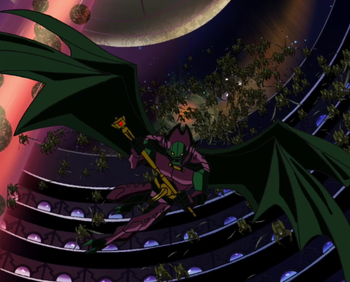 A resident of the Negative Zone with a Cosmic Control Rod and a compulsion to destroy all positive-matter he detects. He saw the positive-matter emitting from the super-villain prison 42 as a disturbance and sent his insectoid Annihilation Wave to destroy it. He did not succeed, thanks to the Leader of all people, with some assistance by some Avengers, some S.H.I.E.L.D. Agents, and some villainous inmates. When all was said and done, Annihilus even left a few casualties behind, including Whirlwind, the Radioactive Man, and Blizzard. 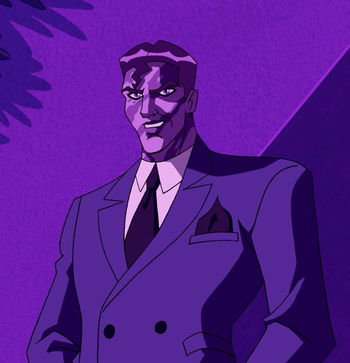 Voiced by: Brent Spiner
First appearance: "Breakout, Part 1"
"Everything I've made you do in the last few weeks, it all came from you. I just gave you the push you needed."

The Purple Man possesses the power to emit pheromones that allow him to control others with verbal commands. He was formally a prisoner of The Raft (presumably due to the highly dangerous nature of his powers, since he usually sticks to less prestigious crime) and escaped during the Breakout. He was later recaptured by Iron Man, only for Purple Man to return for vengeance. He brainwashed Tony Stark into building a satellite capable of extending his mind control across the globe and proceeded to influence Stark into establishing a worldwide corporate dictatorship in the span of a month, all to seize ultimate power for himself and to destroy Stark's legacy.

The four Heralds are animated constructs comprised of the four elements of the ancient world, who serve Galactus when arrives to devour a planet. Each one is destroyed after a difficult fight with a team from the Avengers, the Fantastic Four, and the other heroes. 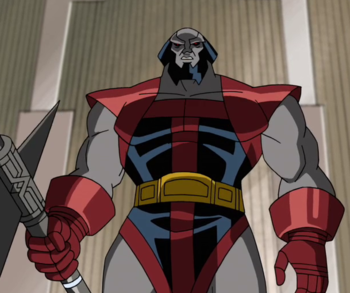 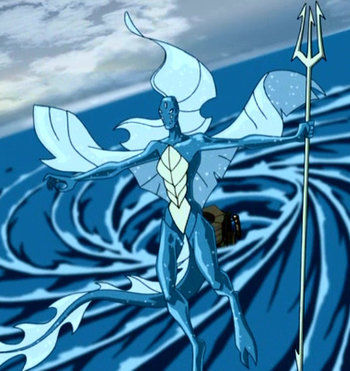 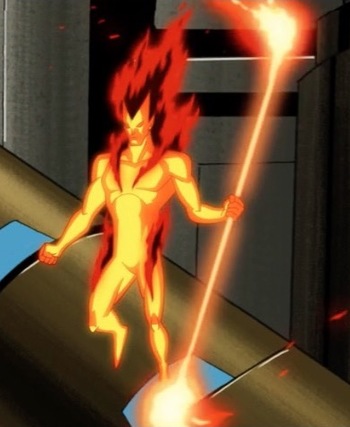 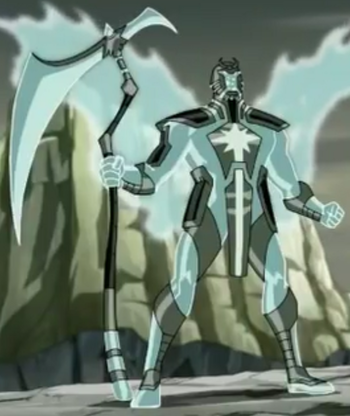