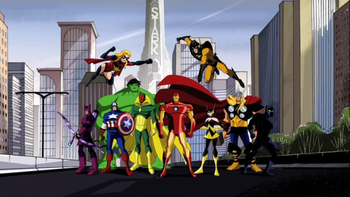 Iron Man: Together, we can avenge the wrongs caused by all these villains.

After banding together through the threat caused by the massive breakout at each of the world's four super-villain prisons and to take down Graviton, five heroes decided that they would do better as a team together rather than individually and formed the Avengers. Originally, the team consists of Iron Man, The Mighty Thor, Ant-Man, The Wasp, and the Hulk, with Captain America, the Black Panther, Hawkeye, Ms. Marvel, The Vision, and a host of other heroes ready to join them. 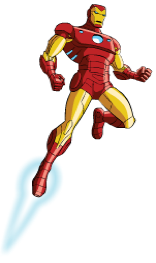 The super hero identity of Tony Stark. As with the most versions, Tony is a former weapons manufacturer who became a superhero after a crippling incident that both damaged his heart and led to his becoming "The Invincible Iron Man." After the break out at the various super-villain prisons, he urges the collected heroes to join forces as The Avengers, providing them with their headquarters as well as leading the team itself. 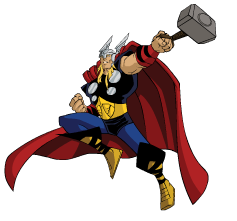 Voiced by: Rick D. Wasserman
First appearance: "Thor the Mighty!" (Micro-Episode: "Thor the Mighty!")
Member since: "Breakout, Part 2"
"Here, I can make a difference. In Asgard, the endless cycle of fighting, it is meaningless! On Earth, everything matters! I'm needed here, Balder."

The Norse god of Thunder. Thor has grown tired of the endless wars of Asgard, and believes that by acting as a hero on Earth, he can make more of a difference. This creates a conflict, in that his fellow gods desire for him to return to Asgard so that he may help defend it whilst their father, Odin, sleeps to replenish his powers. 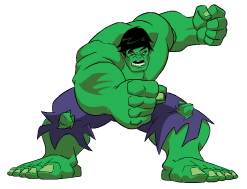 Voiced by: Fred Tatasciore (Hulk), Gabriel Mann (Bruce Banner)
First appearance: "Hulk Vs. The World" (Micro-Episode: "The Coming of the Hulk")
Member since: "Breakout, Part 2"
Banner: "You could make a difference. You could save Thor, just like you saved Samson, in the Cube."
Hulk: "Funny. I don't remember Thor coming to save me."
Banner: "If you help, it'll help us. If you stand by other heroes... if you save lives, people will begin to see that the Hulk isn't a monster. That you can be a force for good!"
Hulk: "Everything you said was true. I am a monster..."
Banner: "That's only true if you let it be. Walk away now, and it will be."

Mutated by exposure to Gamma Radiation, Bruce Banner developed an alternate personality that manifested as the rampaging monster known as The Hulk. However, Banner and Hulk have made peace with one another, and are set on proving their worth to the world while also seeking to undo the damage done by other beings harmed by gamma radiation. 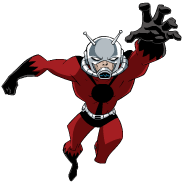 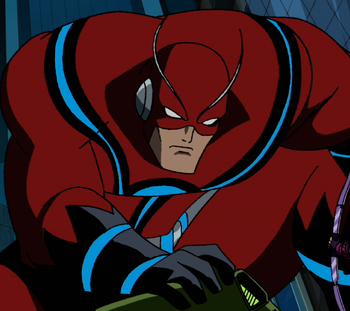 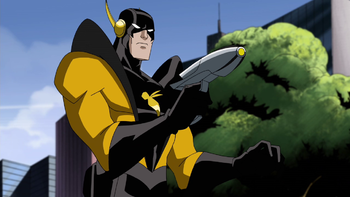 A scientist who developed both the ability to shrink and grow larger, as well as communicate with insects. He has also developed numerous advances in a variety of fields. He's just as interested in rehabilitating the villains the Avengers battle as he is in stopping them, believing that many of their enemies are sick people in need of help. 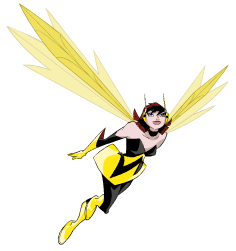 Hank Pym's girlfriend and financial benefactor. She also has powers, and unlike Hank, believes that she and Hank can both make a difference as superheroes, which prompts her to take up arms and join the fight when super-villains come calling. 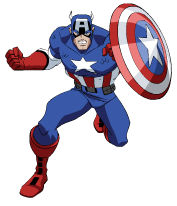 Originally a frail, sickly young man, Steve Rogers was selected to become the first recipient of Abraham Erskine's super soldier formula. Forever transformed, he became the legendary Captain America, hero of World War II. Thought killed in battle with the Red Skull, Steve was actually frozen in ice, until he was discovered and revived by the Avengers. Now, he fights to avenge wrongs in the modern day.

Voiced by: James C. Mathis III
First appearance: "The Man in the Ant Hill" (Micro-Episode: "Welcome to Wakanda")
Member since: "Panther's Quest"
"What happens in Wakanda affects the world, so I will go out into the world. I will fight alongside our new allies!"

As the prince of Wakanda, T'Challa found himself exiled from his home when his father was killed by a conspiracy involving Klaw and M'Baku, the Man-Ape. He sought the help of the Avengers, manipulating them into helping him return to his homeland, where he defeated M'Baku and regained his throne. However, rather than rule himself, he opted to change his country for the better, turning control over to a council, while he joined the Avengers in order to gain their trust and become a better leader for his people. 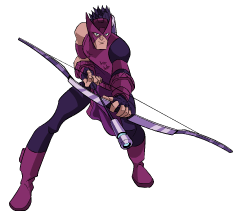 An elite agent for SHIELD, who worked with the Black Widow against high level threats like The Hulk, until Widow framed him as a double agent for HYDRA. Clint then became incarcerated in the Vault, but then set free during the breakout event. He soon managed to clear his name. Refusing to work with the SHIELD agents who doubted his innocence, he joined The Avengers in hopes of locating the Black Widow. 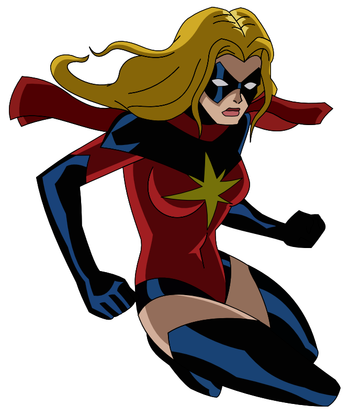 Voiced by: Jennifer Hale
First appearance: "459"
Member since: "Welcome to the Kree Empire"
"Who's up for a little first contact?"

A friend of Wasp's who does research for the military. After Philip Lawson, aka Captain Marvel, shields her from a Kree sentry's attack one night, she develops superpowers. She joins the Avengers in the midst of Kree invasions. Carol also works as an agent for SWORD, the division of SHIELD that tackles extraterrestrial threats. 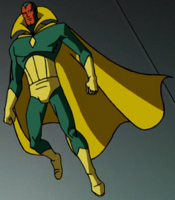 Voiced by: Peter Jessop
First appearance: "Behold... The Vision!"
Member since: "Ultron Unlimited"
"Ultron created me to be perfect. He thought that meant less human, to be cold and unfeeling. I wish to be perfect, but I believe that means to be more human."

An android created by the villainous robot Ultron to carry out Ultron's "vision for the future". While capturing the Avengers for Ultron, Vision developed emotions, which caused him to fail to meet his master's expectations of perfection. Vision soon decided to help the Avengers, after becoming inspired by Captain America's selflessness. 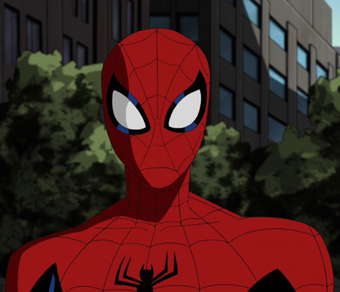 Voiced by: Drake Bell note Originally, Josh Keaton, his voice actor in The Spectacular Spider-Man was brought on, but for unknown reasons, his lines were redubbed by Drake, who voices him in Ultimate Spider-Man.
First appearance: "Along Came a Spider"
Reserve member since: "New Avengers"
"Kang's not invincible. The Avengers have taken him down before and you wanna know how? They did it as a team. They didn't trip all over each other. They worked together and they took him down. And that's what we're gonna do."

He is a freelance photographer for The Daily Bugle, who secretly became a street-level New York superhero after a radioactive spider's bite granted him superhuman strength, agility, and reflexes. Even though he has fought crime since before the Avengers first teamed up, most of the public has difficulty trusting him, partly due to libelous articles in The Daily Bugle. After Spidey and the other New Avengers thwart Kang's second invasion, Iron Man recruits him as a reserve Avenger.

Be warned that since the Red Hulk joined and left the Avengers in his last-ever EMH appearance, all spoilers in this folder will go unmarked! 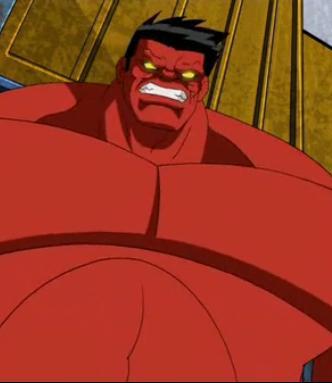 A being created by Dell Rusk to separate the Hulk from the Avengers. After Rusk ended up in jail, Red Hulk became freed from mind control, and announced that he would compensate for his past crimes by fighting for good. His term with the Avengers ended up short-lived. Tropes about his alter ego can be found at The Avengers: Earth's Mightiest Heroes! – Season One Antagonists.

Voiced by: Brian Bloom
First appearance: "A Day Unlike Any Other"
Left in "Secret Invasion"
You have no idea who I am.

Avenger Steve Rogers was captured by Skrulls and replaced with a doppelganger, shortly after the Avengers overthrew Loki and returned to New York. This Skrull replicated Captain America's personality and skills almost perfectly, fooling all of the other Avengers for two months.

See The Avengers: Earth's Mightiest Heroes! – Skrulls for tropes that apply to this character.