The Skrull Empire was once a peaceful and scholarly civilization which ruled over a large sector of space. However, first contact with the Kree barbarians of the planet Hala led to a violent rivalry between the two races. Even as the Kree adopted the Skrulls' higher level of technology in order to compete with them, the Skrulls learned to become aggressive, hateful, and chauvinistic from the pressures of perpetual warfare with the Kree menace. The last straw for the Skrulls was the destruction of their homeworld Skrullos by Galactus, which reduced them to a semi-nomadic existence. Motivated by their state-sanctioned superstitions of a divine exodus that will lead them to a new homeworld on Earth, the Skrull Empire desires to make that planet their own, even while embroiled in the power struggle with the Kree for that corner of the galaxy. In spite of their insidious plans, which involve infiltration of human society at all levels by Skrull impostors, the Skrulls are the more benevolent counterpart to the Kree, who have far less of an excuse for wanting to conquer the Earth and are also far quicker to resort to the methodology of subjugation through absolute genocide. 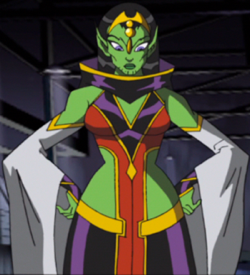 Voiced by: Elizabeth Daily
First appearance: "Who Do You Trust?"

Veranke is the Queen of the Skrull Empire and coordinates the secret invasion of Earth from behind the scenes. S.H.I.E.L.D. Agent Barbara Morse (aka Mockingbird) was captured by the Skrulls, and Veranke replaced her, thus getting the opportunity to manipulate her enemies more directly. 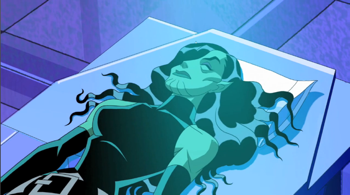 The first Skrull that Nick Fury learns of. She was killed in combat against Mockingbird, revealing her true nature, and her body was retrieved surreptitiously by Nick Fury after Hawkeye's unauthorized invasion of HYDRA Island. 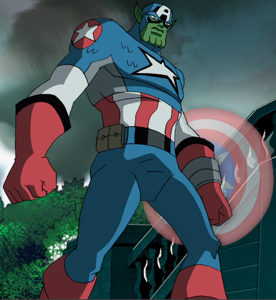 Voiced by: Brian Bloom
First appearance: "A Day Unlike Any Other"
You have no idea who I am.

Avenger Steve Rogers was captured by Skrulls and replaced with a doppelganger, shortly after the Avengers overthrew Loki and returned to New York. This Skrull replicated Captain America's personality and skills almost perfectly, fooling all of the other Avengers for two months. Ultimately, the real Captain America defeated the Skrull in a duel, but the damage done to Steve's reputation took longer to repair. 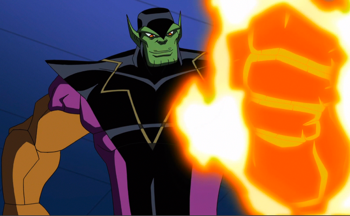 Voiced by: Kyle Hebert
First appearance: "Prisoner of War"
Humans, you think you're so special? Even your powers, we can make more powerful!

Kl'rt the Super Skrull is an incredibly powerful Skrull warrior who has the powers of The Fantastic Four. He tries to recapture all of the prisoners that Captain America frees, but they ultimately escape.

Two groups of Skrulls impersonated each of the Season One Avengers to advance the invasion. The first freed Captain America from his prison cell, so the aliens could learn from his performance how to break the human spirit. The second tried to trick Ms. Marvel into teaming up with them and invading Wakanda.