Zemo: "Your incompetence is unfortunate, Stark. We do not have much time. Zola gave the Enchantress a location. I sent the Crimson Dynamo to delay her, but she will make him talk. She will come here next."
Iron Man: "You sent Dynamo to die?"
Zemo: "That's what a team is for, yes?"
Zemo: "Welcome, Asgardian."
Thor: "I know thee. You are Captain America's foe, Zemo."
Zemo: (chuckles) "You may call me master. Now kneel before me."
"Let the Skull have Bucky. Your life is mine to take!" (to Captain America)

Heinrich Zemo, 12th Baron Zemo, was a Nazi Mad Scientist and pretender to German nobility who used himself as the test subject for a number of experiments in genetics intended to transform him into humanity's most superior specimen. These modifications made Zemo roughly a physical equal to America's super soldier Captain America and vastly increased his longevity. As leader of the German elite research corps HYDRA during World War II, Zemo spearheaded numerous projects to develop new forms of warfare against the Allied forces. One of these projects, a biological warfare agent codenamed Virus X, came to an end in a confrontation between Zemo and Captain America, in which Cap shattered the vat containing Virus X over Zemo's head. The effect was to permanently fuse Zemo's mask to his head and force him to resort to treatments administered by Arnim Zola to stave off the gradually lethal effect of Virus X. Imprisoned in the Raft by S.H.I.E.L.D. as a war criminal 6 years prior to the series premiere, Zemo escaped during the Breakout to retake control of HYDRA, now an international terrorist organization, from Baron Strucker. These plans were siderailed by the unexpected unthawing of Captain America's frozen body by the Avengers, as Zemo decided that he still had a score to settle with the star-spangled patriot. After failing to beat Cap one-on-one with the assistance of Arnim Zola's creation Doughboy, largely thanks to last-minute assistance by the Black Panther, Zemo met the Enchantress and the Executioner and went on to form the Masters of Evil under their influence. 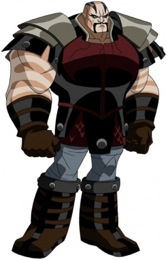 Amora's silent and faithful bodyguard, an Asgardian warrior with a magic battle axe.

Voiced by: Phil LaMarr
First appearance: "Everything is Wonderful"
Member since: "Everything is Wonderful"
Giant-Man: "Simon, I'm glad to see you up and about, but what are you doing with these people? You're a good man. You don't want any part of this!"
Wonder Man: "I don't have any choice. They're the only reason I'm even alive. And if I want to stay alive, I do what they say!"

Scientist, inventor, and industrialist Simon Williams used his corporate funds to conduct research into the practical application and harnessing of ionic energy, but too much spending on the theoretical and not enough profitable results left Williams's company teetering on the edge of bankruptcy. Taking interest in Williams's chosen research specialty, Tony Stark bought out his company to both acquire the attached intellectual properties and save the company's many employees from imminent unemployment. Williams, not truly a businessman at heart, failed to see this and myopically became fixated on the conceptualization of Stark as a greedy pig whose sole purpose was to make his life miserable. His despair at losing his life's dream to another led to a lapse in Williams's judgement, causing him to trust his brother Eric, A.K.A. The Grim Reaper, to introduce him to A.I.M. scientists who could turn him into an ionically-powered super-being capable of crushing Iron Man. Instead, Wonder Man lost his physical form and became an unstable Energy Being, seemingly withering away into nothingness during a fight with Iron Man and Ant-Man even as they tried to save him with Stark Tower's giant ARC Reactor. In actuality though, Wonder Man was preserved at the last possible moment by the magicks of the Enchantress, forcing him to work for the Masters of Evil in exchange for his life.

Voiced by: Chris Cox
Fist appearance: "Iron Man is Born!" (Micro-Episode: "Nick Fury, Agent of S.H.I.E.L.D.")
Member since: Some time in between "Everything is Wonderful" and "Gamma World"

Ivan Vanko is a Russian inventor who blames Howard Stark, and Tony Stark by proxy, for the life's misfortunes of his late father Anton. Vanko's grudge leads him to become the Crimson Dynamo, Iron Man's equal and opposite number. 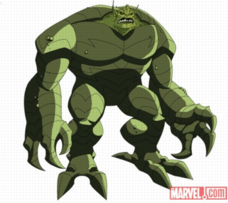 Voiced by: Robin Atkin Downes
First appearance: "Hulk vs. The World" (Micro-Episode: "This Monster, This Hero")
Member since: "Gamma World, Part 2"
"I'll always beat you Hulk. I'm better than you in every way!"

A Russian-born British soldier who succumbed to gamma radiation to become a monstrous super-villain. After numerous fights with the Hulk, he was imprisoned at The Cube until the Breakout, and went on to work for the Leader. He later was recruited into the Masters of Evil by Baron Zemo after the Leader's plan failed.

Voiced by: Grant Monger
First appearance: "The Big House"
"I am the finest bio-engineer on the planet, and over the years I have learned one important thing. Every problem has a solution."

Arnim Zola served as HYDRA's premier geneticist during WWII. Surviving into the modern day as an enormous, bizarre hybrid of man and machine, he continued to serve Baron Zemo, helping him transform his body and survive the effects of Virus X. Having been incarcerated in the Big House until the Breakout, he is now free to unleash his creations upon the world again. He later served as the resident non-combatant scientist and lair-keeper for the Masters of Evil.

By the time the Masters of Evil gained the Norn Stones, they recruited three other supervillains: Living Laser, Chemistro, and the Grey Gargoyle.