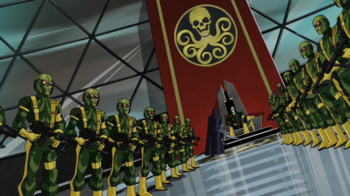 HYDRA was established sometime during or before World War II by the Nazi regime in Germany as an elite corps of the SS specializing in development of unusual weapons and technologies. Under the auspices of Baron Heinrich Zemo, HYDRA's main wartime ambition was to develop a portal capable of contacting alternate dimensions, in actuality the Nine Realms on the World Tree Yggdrasil, and summoning the Nordic mythological creatures which lived in them for the purpose of enslaving them and turning them against the Allies. This operation, overseen by the Red Skull, Baron Wolfgang von Strucker, and Arnim Zola, was thwarted thanks to the efforts of Captain America, Bucky, and the Howling Commandos, but Bucky paid with his life for trying to stop the Skull from escaping. By the start of the series, however, much has changed since then. HYDRA is now a stateless terrorist organization with international scope and aspirations of world conquest, led by Baron Strucker. Baron Zemo and Arnim Zola have long since struck out on their own and been imprisoned by S.H.I.E.L.D. in the Raft and the Big House, respectively. The Red Skull, on the other hand, went into hiding and has not been seen or heard from in decades. Regardless, HYDRA at the series's start represents the greatest threat to the freedom of the world that the Avengers can tackle, and A.I.M.'s contract with them for the development of a Cosmic Cube capable of restructuring reality presents the frightening possibility of a HYDRA rule spanning the globe.

The opposite number and greatest enemy of Captain America. A super-soldier created by HYDRA, he sought to attain the power of the Asgardian beings before his schemes were stopped by Captain America and his sidekick, Bucky. Unfortunately, he lived on to see another day, while Captain America lost his closest friend and plunged into the icy arctic waters. Eventually, Cap and Skull clashed again in the present day.

Voiced by: Lance Henriksen
First appearance: "Iron Man is Born!" (Micro-Episode: "Behold the Mandroids!")
Grim Reaper: "I have to say, I'm a little surprised to hear from you after all these years. Since you don't associate with... wait, what did you call me?"
Simon: "Eric..."
Grim Reaper: "Oh yes. Psychopath. Criminal scum. But don't worry, Simon... I don't take it personally."

Eric Williams, A.K.A. The Grim Reaper, is a psychopathic sadist who aligns himself with HYDRA not out of ideological sympathy but rather simply for the chance to hurt and maim hundreds of people along the way. Though it is uncertain whether he first obtained his fearsome alias from his grisly reputation or from the cybernetic scythe implant HYDRA built into his forearm, one thing that is certain is that Reaper (in spite of his questionable loyalties and homicidal bloodlust) is one of Baron Strucker's most adept lieutenants. The Reaper's brother Simon Williams, a considerably more decent man, lost his company to Tony Stark and was introduced to MODOC by Reaper to undergo the experimental treatment that transformed him into the Master of Evil Wonder Man.

Voiced by: Jim Ward
First appearance: "Iron Man is Born!" (Micro-Episode: "Nick Fury, Agent of SHIELD")
"Soon all the world will know that not even the Avengers will stand against the power of HYDRA."

He is the current leader of HYDRA after the disappearance of the Red Skull and the incarceration of Baron Heinrich Zemo 6 years before the series premiere. He was imprisoned like Zemo too though, albeit in the Vault, and has remained there, despite a breakout attempt orchestrated by the Grim Reaper disguised as a failed attack on the UN. However, with The Vault and the other super-villain prisons compromised by the Breakout, Strucker is now free to rule HYDRA again. He possesses a cybernetic false hand, the Satan Claw, which allows him to drain the vitality out of his victims and use it to restore his youth. Strucker's main ambition is plain and simple: to create by conquest or any other means a world in which HYDRA rules all. 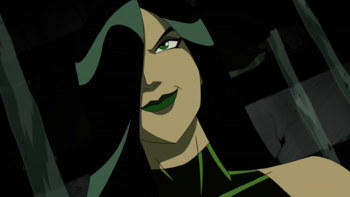 Madame Viper is Baron Strucker's other lieutenant, after the Grim Reaper, and in all probability his more reliable and sane one. She was at some point replaced with a Skrull impostor, and teamed up with other prisoners to escape captivity. Back on Earth after the ordeal, Viper teamed up with the Serpent Society as their impromptu leader to break out of a prison transport and fight Captain America and Spider-Man in the sewers while the heroes were defending helpless civilians.