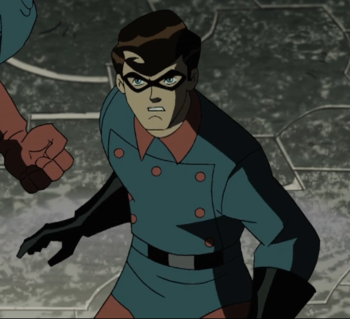 Click here to see him as the Winter Soldier 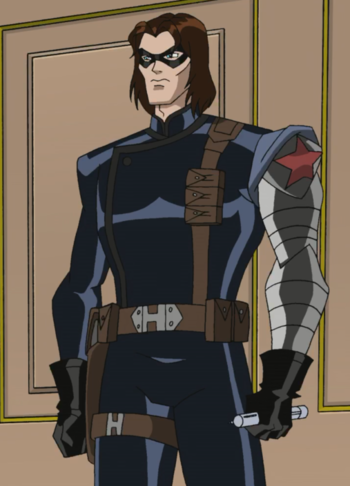 A young sidekick who fought alongside the legendary Captain America during World War II. Bucky's last WWII adventure ended with him and Cap on Red Skull's rocket, and Bucky sacrificing himself to prevent the bomb inside the rocket from killing Cap. The Cosmic Cube eventually undoes Bucky's death, but he and Cap reunite under circumstances they would've never expected.

A Kree alien scientist stationed on Earth. His stay caused him to develop an appreciation for the planet, particularly a fondness for Carol Danvers. This has motivated him to try and convince the other Kree aliens that Earth could prove a valuable asset in the Kree/Skrull war. 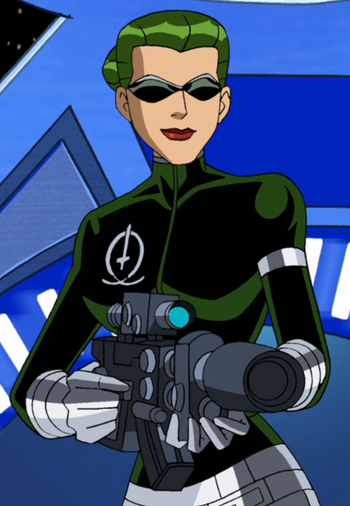 The top agent of S.W.O.R.D., a branch off of SHIELD that specializes in extraterrestrial threats. 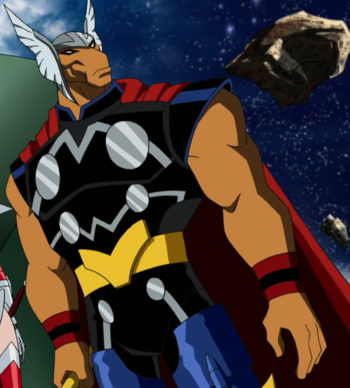 Voiced by: Steve Blum
First appearance: "The Ballad of Beta Ray Bill"
I was chosen to be the guardian of my people. I underwent...modification. I became Beta Ray Bill, the pinnacle of Korbinite genetics and technology.

An alien warrior whose people and planet was destroyed by Surtur, making him one of the only survivors. Upon running into Thor, Bill discovers that he is worthy to lift Mjölnir, and joins Thor in battle against Surtur's demons. 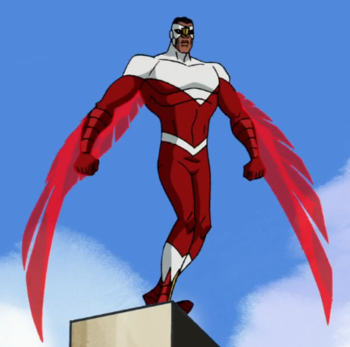 Voiced by: Lance Reddick
First appearance: "Nightmare in Red"
"This is Falcon. I'm in position."

An African-American superhero with a special harness allowing him to fly. 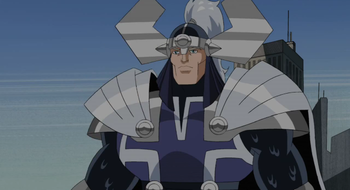 A warrior of Asgard and Thor's half-brother. 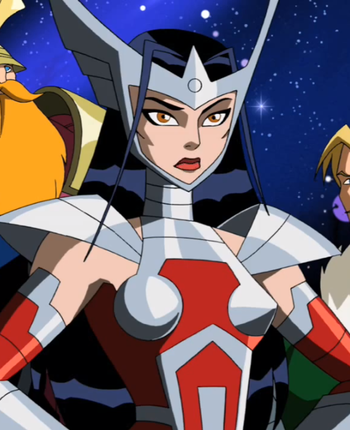 A female warrior of Asgard who often fights alongside Thor. 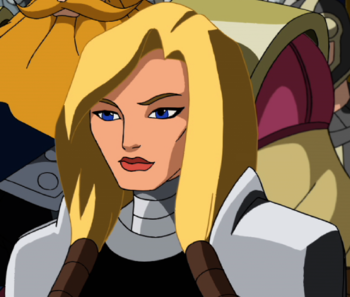 The leader of the Valkyrior. 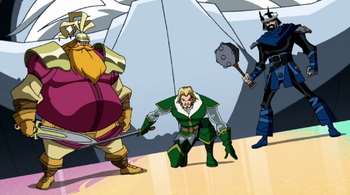 Fandral the Dashing, Hogun the Grim, and Volstagg the Voluminous, three Asgardian warriors that always fight as a group. 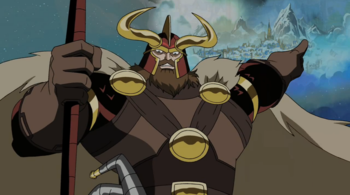 The Guardian of the Bifrost Bridge and the brother of Sif. 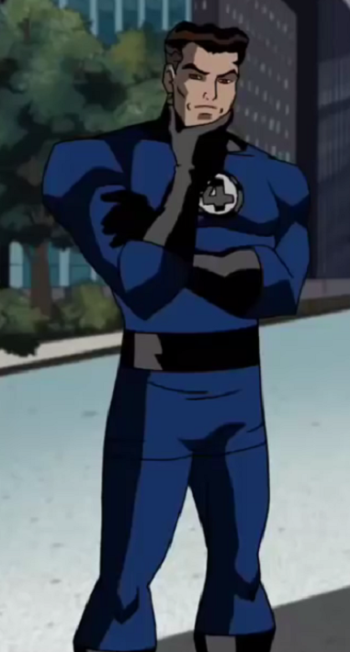 Voiced by: Dee Bradley Baker
First appearance: "The Kang Dynasty"
"I can think of fourteen different ways to seal you in that armor forever."

Leader of the Fantastic Four. He can stretch his body to great lengths, and also works as a scientist. One of his achievements included the creation of Prison 42.

Voiced by: Erin Torpey
First appearance: "The Private War of Doctor Doom" (Skrull); "Prisoner of War" (Sue)
"The Fantastic Four have put a few bad guys away in here, but we're mostly just out exploring whatever new thing Reed's found."

Reed Richards' girlfriend. She has the powers to turn invisible, and create invisible force fields. When the Skrulls started infiltrating Earth, they replaced Sue with an imposter to infiltrate the Fantastic Four. 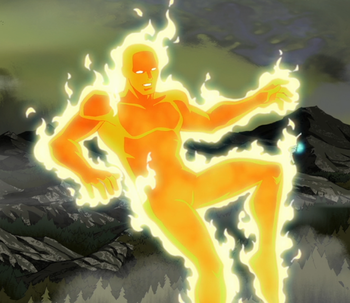 Voiced by: David Kaufman
First appearance: "The Casket of Ancient Winters"
"Flame on!"

Sue Storm's brother. He has the powers to fly, and encase his body in fire. 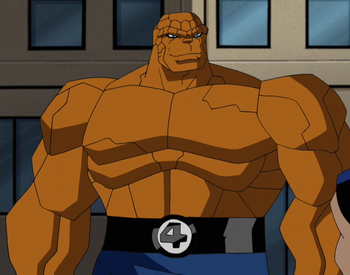 Reed Richards' best friend. He has super strength, and skin made of rock. He joins the New Avengers in the midst of Kang's second invasion.

Voiced by: Christopher B. Duncan
First appearance: "To Steal an Ant-Man"
"You mess with us and you're not going to jail. You're going to the hospital."

A tough-skinned Hero For Hire who who finds himself and Iron Fist employed by Pym to try and recover his stolen equipment. Luke can't resist a good fight, as long as someone offers to pay him for catching the criminal. He joins the New Avengers in the midst of Kang's second invasion. 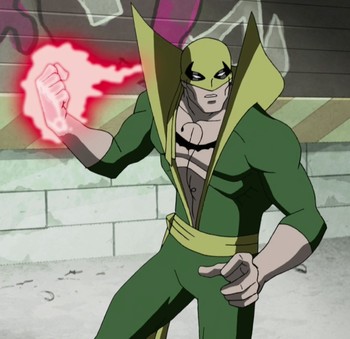 Voiced by: Loren Lester
First appearance: "To Steal an Ant-Man"
"Focusing my chi. Maybe if you were open to focusing your own energy, you wouldn't be so angry all the time."

A master martial artist, and friend of Cage's, who Pym also hires to track down the one who stole his Ant-Man equipment. Danny faces his duties as a Hero For Hire with a calm demeanor and an enchanted fist. He joins the New Avengers in the midst of Kang's second invasion. 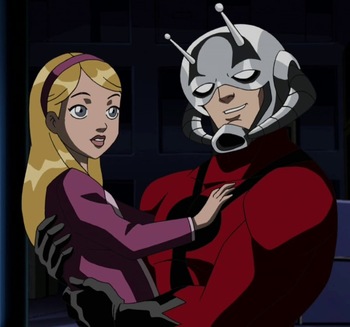 Voiced by: Crispin Freeman
First appearance: "To Steal an Ant-Man"
"You will never threaten my daughter again! Do you hear me?"

An electrical engineer-turned bank robber-turned custodian who stole Hank Pym's Ant-Man suit to save his daughter, Cassie Lang, from Crossfire. Instead of having Scott go to jail for his latest bank robbery, Hank (along with Iron Fist and Luke Cage) helped him rescue Cassie, then allowed Scott to become the new Ant-Man. Iron Fist also invited Scott to join the Heroes For Hire.

Tropes applying to the team as a whole 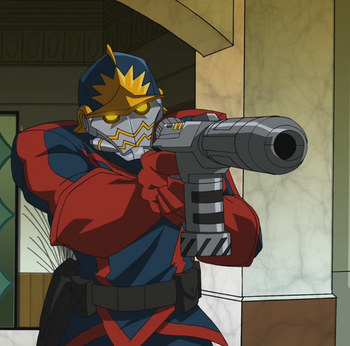 Voiced by: Steve Downes
First appearance: "Michael Korvac"
"There are things out there in the universe, you're better off not knowing about."

Leader of the Guardians of the Galaxy and the only actual human member in this incarnation. 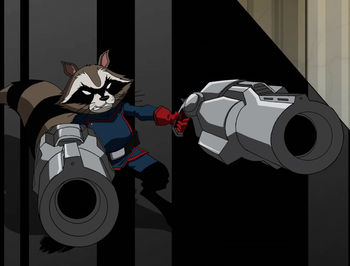 Voiced by: Greg Ellis
First appearance: "Michael Korvac"
"What's going on is that you ape people really need to knock this off."

A Halfworlder raccoon, weapons specialist and second in command of the Guardians of the Galaxy 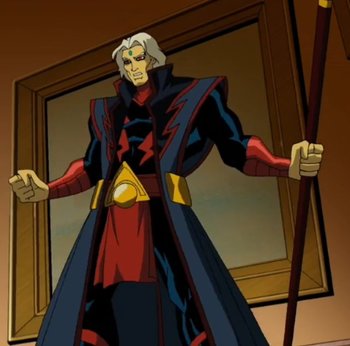 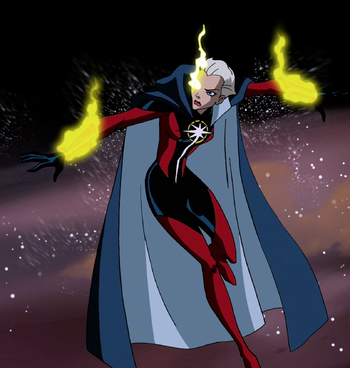 Wielder of the Quantum Bands and a member of the Guardians of the Galaxy. 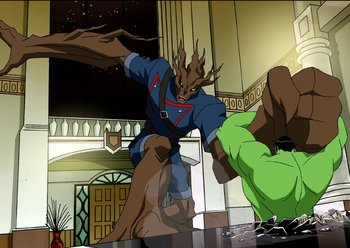