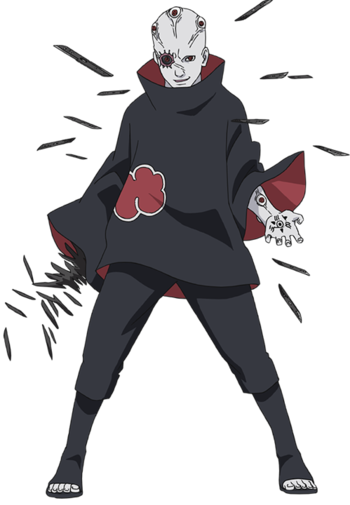 "Peace means an end to evolution for humans, that's exactly what you all are. Species without evolution are eventually destroyed."

The man Shin is working for, who Shin refers to as his "father". He was a former test subject of Orochimaru. After developing a fixation on the Uchiha clan, more specifically Itachi, he took the Uchiha name for himself and severed ties with Orochimaru, taking his "sons" with him. Believing that peace was detrimental to human evolution, Shin began a plot to revive the Akatsuki so that the ensuing conflict would be a catalyst to further his beliefs. 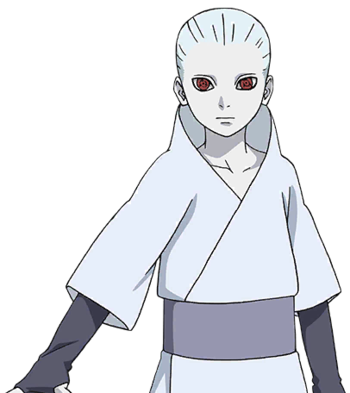 A mysterious white-haired boy with Sharingan eyes. Later revealed to be just the name given to the various individual genetic clones of the original Shin Uchiha, who treats them both as sons and organ donors.

The self-proclaimed Seven Ninja Swordsmen of the Mist were formed by Shizuma Hoshigaki, the group's main objective was to start a coup d'état in Kirigakure to overthrow the Sixth Mizukage and replace him with Kagura Karatachi, as well as return the village to the era of the "Bloody Mist". Ultimately, the rogue group was defeated and their rebellion stopped before it could actually begin, being written off as "just a scuffle among kids". Afterward, the group's original members were imprisoned in a correction center to undergo rehabilitation.
Shizuma Hoshigaki 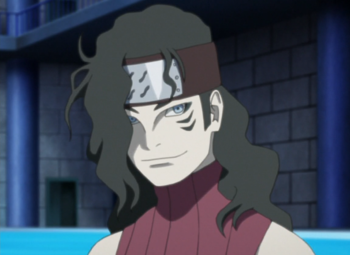 Leader of a gang of delinquent ninja who believes in reviving the Blood Mist era of the Hidden Mist. While he claims that it is to restore the Mist to its "glory days", in truth, Shizuma is a psychotic piece of filth who will kill anyone who stands in his way and commits these heinous acts simply because it's fun. His plans never see fruition when he's taken down by Boruto and Kagura. 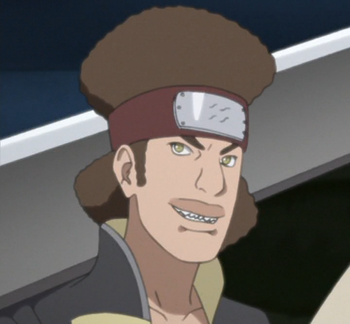 One of the first members of the new seven swordsmen introduced. First makes an appearance by picking a fight with Iwabee, before Boruto got involved and Shizuma stopped it. Ends up taking Kubikiribocho, the blade previously used by Zabuza. 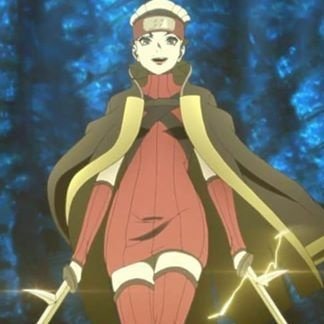 Daughter of Raiga Kurosuki, the previous holder of Kiba. Seems to be in a relationship with, or is at least very close with Shizuma. 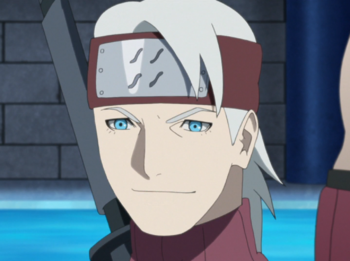 Current wielder of Shibuki, after they stole it. Seems to be the most level headed of the group. 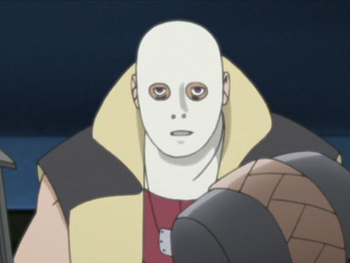 Resident big guy of the group. Wields the giant ax and hammer Kabutowari. 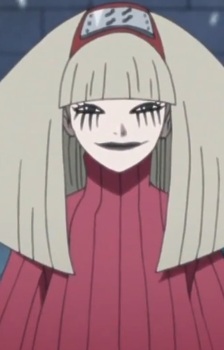 A creepy looking girl who comes into possession of the Nuibari when the group steals the swords.

As A Whole
An experimental unit of synthetic lifeforms created by Ohnoki using a combination of his DNA and that of a White Zetsu to replace traditional Shinobi, beginning in the Hidden Earth Village.
Lord Ku

Leader of the Fabrications. He is a direct clone of Ohnoki fused with White Zetsu DNA.

One of the four Fabrications below Ku, serving as one of the field commanders. Unlike the others, he possesses no known special abilities.

One of the four Fabrications below Ku. He is the most jovial of the group and uses explosive clay.

One of the four Fabrications below Ku and the only female.

One of the four Fabrications below Ku. Has access to his progenitor's trademark ability.

A mysterious scientist who provides the materials and technical know-how to create the Fabrications.

Leader of the Mujina Gang, a group of common thieves who evolve into a terrorist organization when they take the heir to the Land of Fire hostage. Shojoji intends to cause an international crisis and chaos so he can quietly seize power.

Second in command of the Mujina Gang, who was captured and imprisoned in Hozuki Castle.

A prisoner at Hozuki Castle and secretly a member of the Mujina Gang.

An ornithologist assigned to be protected by Team 7 and Team 15, originally sent to study the strange behavior of the wild geese in the area. But it turns out that he has a sinister motive.

As a whole
A group of siblings from the Land of Haze operating in the anarchic Land of Silence, hoping to secure the stolen Hashirama Cell to safeguard their nation.
Asaka

Leader and by extension the oldest of the Haze Quadruplets.