Characters / A Song of Ice and Fire - Essos - Slaver's Bay

This is a listing of the people of Slaver's Bay in A Song of Ice and Fire.

Situated in the middle southern coast of Essos, Slaver's Bay is the hub of all slave trade in Essos. Built from the remnants of the Ghiscari Empire, each of the three slave cities in Slaver's Bay focus on different kinds of slaves: Astapor produces the warrior Unsullied, Yunkai trains pleasure slaves, while Meereen produces artisans and pit fighters. Each city is ruled by an elite upper class of slave traders and ancient families.
open/close all folders
Tropes related to Slaver's Bay
Advertisement:

"Tell her to look at the soldiers. Even the dim purple eyes of a sunset savage can see how magnificent my creatures are surely."

A Good Master, Kraznys oversees the training and selling of the Unsullied.
Grazdan mo Ullhor

A former slave who rises to power in Astapor after executing the three councilors that Daenerys had installed after overthrowing the Good Masters.
Ghael

A former slave who becomes King Cleon's envoy to Meereen. He's later made a lord.
Advertisement:
Cleon the Second

The successor of the Butcher King. His rule is ended after being assassinated.
King Cutthroat

One of the claimants to the crown of Cleon the Second. He's the man who killed him.
Queen Whore

The other claimant to the crown of Cleon the Second. She was his concubine.
Advertisement: 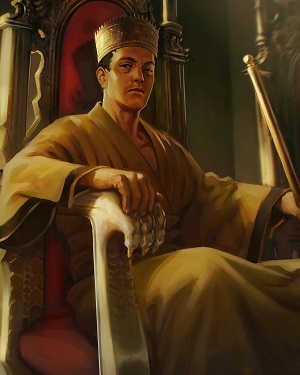 "One day all men must die, but it serves no good to dwell on death. I prefer to take each day as it comes."

A noble descended from several famous Ghiscari citizens and a member of the powerful House of Loraq. He pressures Daenerys to reopen the fighting pits, which he has substantial stakes in. Eventually marries Daenerys to secure her hold on the city.

A kinsman of King Hizdahr, he's placed in command of the Brazen Beasts after Daenerys' marries Hizdahr.
Khrazz

A celebrated Meereenese pit fighter who becomes one of Hizdahr zo Loraq's bodyguards. 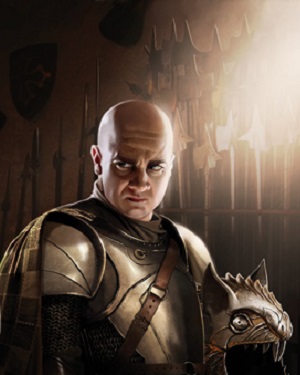 "We will rue your old man’s honor before this game is done."

A noble who sides with Daenerys Targaryen after she conquers Meereen, serving as a councilor to her and commander of the Brazen Beasts.

A noble who serves Daenerys as her seneschal, but is not very trusted by her or Ser Barristan Selmy.

A noble house of Meereen that is among those which are more friendly to Daenerys' rule.
Galazza Galare

"Peace is the pearl beyond price."

High priestess of Meereen and an ally to Daenerys.

In general
A prominent house whose loyalty is viewed with suspicion.

The House of Pahl was among the most ancient and powerful of the Meereen slaving families. When Queen Daenerys Targaryen attacked Meereen, Pahl suffered numerous losses in both life and wealth and are now among her most bitter enemies.
Oznak zo Pahl

Regarded as one of the strongest warriors in the city, Oznak challenges Daenerys' army to Combat by Champion and ends up fighting Strong Belwas during the siege of Meereen.

The Hero, The Dragonslayer

An animal handler at Daznak's Pit that tries to slay Drogon.
Hazzea

A clandestine resistance group opposing Daenerys' rule of Meereen. They target freedmen, Unsullied, and Shavepates (Meereenese that have accepted Daenerys' government). Suspected of belonging to the noble slaving families and being led by someone known as "The Harpy".
The Brazen Beasts

The city watch of Meereen formed and commanded by Skahaz mo Kandaq and composed of shavepates and freedmen. They wear masks shaped like the heads of different animals to protect them and their families from reprisals by the Sons of the Harpy. They wear hoods and cloaks patched together from different colored clothes to represent the many-colored bricks of Meereen.

"Ancient and glorious is Yunkai, the queen of cities. Our walls are strong, our nobles proud and fierce, our common folk without fear. Ours is the blood of ancient Ghis, whose empire was old when Valyria was yet a squalling child."
—Grazdan Mo Eraz

"Do you think it is so hard to kill a dragon?"

A Wise Master who is sent as an emissary to Daenerys to convince her to leave Slaver's Bay, and later to Volantis to convince them to help fight Daenerys.
Gorzhak zo Eraz

A Wise Master mocked as Pudding Face by the Windblown.

The Yellow Whale, Lord Yellowbelly, The Lord of Suet

A Wise Master who is the richest slave trader in Yunkai, giving him great influence. He is in favor of making peace with Daenerys Targaryen.
Nurse

An intersex slave of Valyrian blood and one of Yezzan's "treasures". Has purple hair and purple eyes.

A very old Wise Master and the "Supreme Commander of the Armies and Allies of Yunkai".
Malazza

A female Wise Master mocked by the Windblown as the Girl General.
Paezhar zo Myraq

A Wise Master mocked as the Drunken Conqueror by the Windblown.