Characters / A Song of Ice and Fire - Essos - The Dothraki

This is a listing of the Dothraki in A Song of Ice and Fire.

A warrior nomadic race, which practice a culture than is seen as barbaric and brutal to the rest of the world. Khalasar's roam the Dothraki Sea, a massive grassland that covers a large portion of Essos. They raid cities for plunder and slaves, which they sell to the cities of Slaver's Bay. Most cities avoid getting attacked by paying off the Khals, but those who cannot afford to do so suffer frequent attacks.
open/close all folders
In General
Advertisement:
Khal Drogo 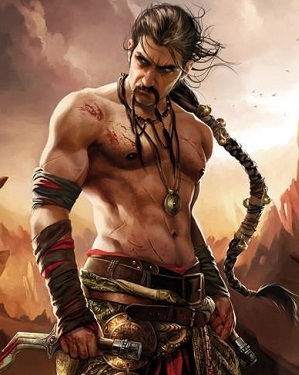 "I swear before the Mother of Mountains as the stars look down in witness!"

A powerful Dothraki warlord Daenerys is arranged to wed early in A Game of Thrones. At first appearing to be nothing more than a bloodthirsty barbarian, Drogo revealed his gentler side when Daenerys began to gain her strength and accept her role as Khaleesi. They are very much in love by the time they discover their unborn son, Rhaego, is destined to be The Stallion who Mounts the World. He is uninterested in humoring her brother Viserys or his dream of conquering Westeros, eventually killing him after he pisses Drogo off one time too many. However, once Daenerys' life is endangered by one of Robert Baratheon's assassins, Drogo has a new passion for crossing The Narrow Sea, sacking Westeros, and taking her family's Iron Throne. 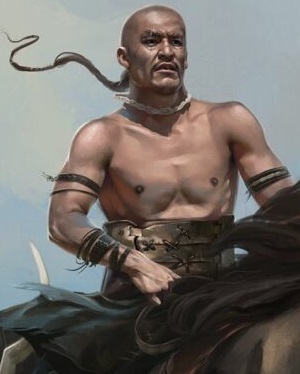 One of Drogo's bloodriders, he saved Drogo's life when Drogo was young and has been his companion since.

A warrior assigned to Daenerys' khas.

A ko in Drogo's khalasar. He becomes an independent Khal after Drogo falls ill.

A ko in Drogo's khalasar. He becomes an independent Khal after Drogo falls ill.

Allies and rivals of Khal Drogo.

The elderly widows of dead khals who reside in Vaes Dothrak. They enjoy great honor and status amongst the Dothraki, and serve as seers, foretelling the future and interpreting omens for their people.

Mengo was the first Khal of the Dothraki, who forged over 30 different nomadic tribes into a single nation.

Four khals that faced High King Mazor Alexi and the Sarnori on the Field of Crows, and their combined strength was 80,000 men against 100,000 Sarnori. While Haro died in battle, the other three Khals destroyed the Sarnori and the rest of their cities soon after.

The Dragon of the North

A khal who lived during the Century of Blood. He was famous for destroying the ibbenese city of Ibbish, earning the moniker of the Dragon of the North. He was defeated and killed by Khal Temmo in his old age.
Advertisement:
Khal Temmo

The khal who lost the Battle of Qohor against the Three Thousand Unsullied.