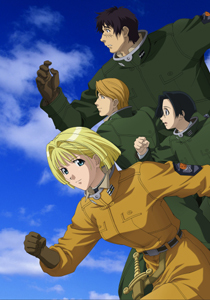 "There is no war, yet peace has not graced the land... This story is about the stage in between."
Advertisement:

Randel Oland is a homeless refugee, one of many displaced by the war. He sleeps under a bridge and spends what little money he gets on cat-food to feed the strays. He also carries with him a blue-light lantern, and a massive handgun that can pierce tank armor at close range.

When War Relief Section III, "Pumpkin Scissors," crosses his path, Randel finds himself drawn back into the army in the wake of the energetic Lieutenant Alice Malvin. Besides the usual trouble of hunting down war aggravators, the Pumpkin Scissors crew is soon swept up in events from Randel's dark past.

With initial character and storyline debts to both Fullmetal Alchemist and Trigun, Pumpkin Scissors nevertheless persists in pursuing a different take on themes of war and humanity.