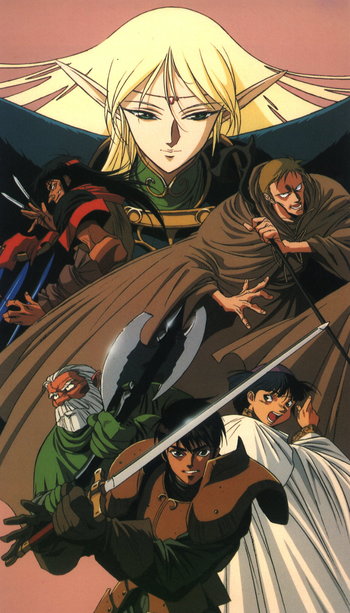 Record of Lodoss War first began as a series of role-playing game sessions (with the first edition of Dungeons & Dragons as the basis no less), recorded and transcribed into a series of novels by Ryo Mizuno which was originally published from 1988 to 1993. In 1990, it became an animated 13-part OVA series, and from then on it branched into movies, manga and TV series (some of which were alternate universe versions of the OVA, but which followed the story in the original novels more closely). It even returned to its roots as the most popular tabletop role-playing game in Japan. The Lodoss RPG was created after TSR turned the world down as a Dungeons & Dragons supplement.

See also Rune Soldier Louie, which is set in the same world as Lodoss, on the northern continent of Alecrast (but which is otherwise unconnected to the series), and Legend of Crystania (a novel, film and OVA series that partly serve as a Distant Epilogue about Arsham and Pirotesse). The same author later wrote Record of Grancrest War.

In commemoration of the series' thirtieth anniversary, a metroidvania-style game entitled Record of Lodoss War -Deedlit in Wonder Labyrinth- was released on Steam Early Access in March 12, 2020 and made a full release on March 27, 2021, with a console release on December 16, 2021.

Not to be confused with Record of Agarest War or Record of Grancrest War.

The War of the Gods

The first episode of the Record of Lodoss War OVA recounts the story of the war between the gods that resulted in almost all of them falling in battle and split the island of Lodoss away from the continent of Alacrast. A compressed version of this retelling is used as the opening narration in the rest of the series.

The War of the Gods

The first episode of the Record of Lodoss War OVA recounts the story of the war between the gods that resulted in almost all of them falling in battle and split the island of Lodoss away from the continent of Alacrast. A compressed version of this retelling is used as the opening narration in the rest of the series.