These are the characters from The Witch's House. Due to the limited number of characters who appear, all of them will be grouped here.

WARNING: due to the nature of the plot, all spoilers are unmarked! 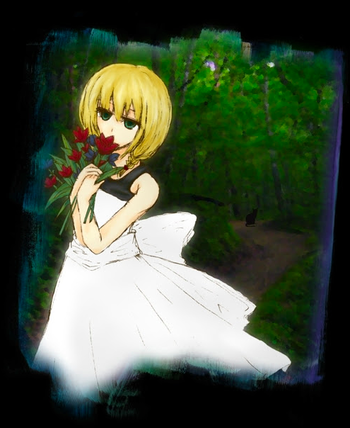 If only I could take your place...

I felt so sorry for her, I lent her my body. ...And yet. Ellen ran, leaving me behind. She had me drink a medicine that burned my throat, and said she'd borrow my body forever. Her betrayal echoed in my ears.

The Decoy Protagonist/Hero Antagonist of the game. She is a 13 year old girl and the only daughter of a huntsman. Viola befriends Ellen, the witch who lives in a large house on the edge of the forest. Unfortunately, Ellen tricks her into switching bodies, then mutilates her own body, trapping Viola inside the house while she escapes. Viola traps Ellen in her house and uses her powerful magic to warp the house in a way that it becomes a dangerous threat. Throughout the game, she appears in cryptic moments, and never says a word before Ellen encounters her in the last stretch of the game; ultimately, she is tragically killed by her own father, in the man's misguided attempt to protect his daughter. 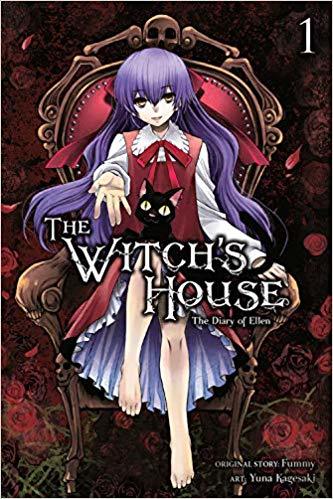 If you won’t love me, I don’t need you. If you’re loved, but you won’t accept it, I’ll never forgive you.

My sickness was going to kill me. So… I took her body from her. I lived on in her body. That's fine, right? Because we're "friends".

The titular witch, and the true protagonist of the game. Ellen lives in a house on the edge of the forest, surrounding by dark legends of kidnapping the children who go into the forest. Having lived alone for centuries, due to being very ill and having killed her own parents in retribution for neglecting her, Ellen made a pact with a demon to become his witch and help him consume souls. After killing hundreds of people for centuries, she befriended Viola, a young girl who came to play with her; effectively getting her first real friend. Her adventure throughout the game takes her through her house as she tries to make an escape from it; avoiding every trap and solving every puzzle to make it out of the house safely, along with her faithful black cat, the aforementioned demon. 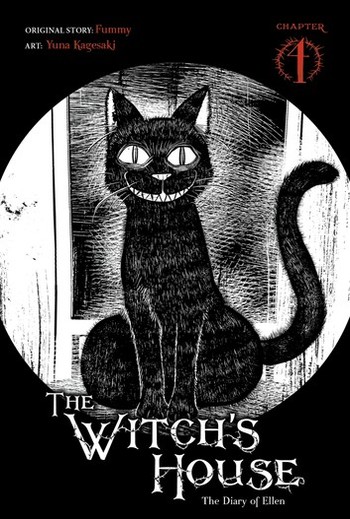 Good luck with the rest, Ellen... my faithful witch.

By the way, this is a witch's house, but you already knew that, right?

A supporting character in the game, the Black Cat is a sarcastic talking cat that accompanies Ellen throughout the duration of the game, functioning as her save point. He is also the demon who contracted Ellen, making her into his witch, and he uses her to kill people so he may collect their souls.

"COME TO MY ROOM"

The titular Witch's House that belongs to Ellen. Though Viola uses the House to try to kill Ellen, the House sometimes spawns notes on the walls giving you hints on how to proceed through it. In the Diary of Ellen, we learn that the House was created by a spell the Black Cat knows, and his previous Witch loved it so much that her wish was to become the spell that summoned it, turning her into the house itself.

"A hand is exactly what I needed"

An invisible character, who may help you if you "lend a hand".

Ah. You're giving me this? Thank you!

An invisible entity that helps you by giving her the Book of Death in exchange for the rope to 'tie' the books, which you later find out that he commits suicide by hanging himself. The prequel reveals that he is Ellen's first friend and victim, a young illiterate boy.

A hunter, who is Viola's only surviving family left after the death of her mother. He writes a letter to her just before the beginning of the game, which can be found in two parts at the start and at the end.

A woman who seems to actually love Ellen, unlike her father, but neglects her as much as he does. She tries to leave the family for a rich man, driving Ellen to kill her.

A drug and alcohol addict that neglects his ill daughter, but genuinely loves his wife. Is killed by Ellen after he discovers her murder of his wife.

The first and only pursuer of the first floor in Normal Mode.

One of the two pursuers of the second floor.

One of the two pursueers of the second floor.

A Giant snake living in one of the rooms in the third floor.

A portrait of Mona Lisa that pursues the player after taking the Music Sheets.

A seemingly ordinary toy soldier carrying a fake gun. Becomes and replaces the Woman Portrait as the pursuer in the fourth floor.

One of the pursuers of the fifth floor. It is unique from the other pursuers that you encounter it twice.

One of the (many) pursuers of the fifth floor.