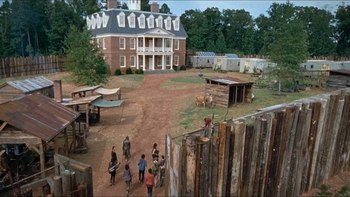 "The place was running a long time before the modern world built up around it. I think people came here because they figured it'd keep running after the modern world broke down. Those windows up there let us see for miles in every direction."
— Paul "Jesus" Rovia

An agricultural community in rural Virginia close to the Alexandria Safe-Zone. 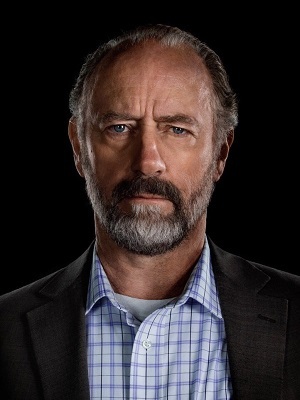 "I built this place!"

"The Hilltop is my house. I'm still the guy. I've always been the guy."

The leader of the Hilltop community who Rick's group meets to discuss establishing trade. When the group learns that Gregory has been subjugated by the Saviors, Maggie arranges a deal with Gregory so that Alexandria will assassinate Negan in exchange for supplies. Unfortunately, both Hilltop and Alexandria were unaware of the true size of the Saviors, and the latter is cowed into submission. Gregory is annoyed that Rick failed to follow through with his deal, and begrudgingly allows Maggie and Sasha to stay at Hilltop.

To Gregory's dismay, Maggie quickly begins proving herself as a far more competent leader than he could ever hope to be. She throws herself onto the frontlines during a Savior attack, begins getting to know the citizens, and generally bringing out Gregory's worst side for his constituents to see. Gregory is enraged when Hilltop slowly replaces him with Maggie as their leader. He attempts to sell out the colony to the Saviors, but finds that their loyalties now lie with Maggie. Gregory spends most of the duration of the Savior War as a prisoner alongside the captured Saviors, Maggie knowing full well he can't be trusted.

After the Savior War, Gregory is allowed to reintegrate into Hilltop, but officially loses the position of leadership to Maggie in an election. Down but not out, Gregory spends the next year and a half trying to rebuild his credibility with Hilltop and to present himself as a loyal ally to Maggie, but is only waiting for the right opportunity to kill and overthrow Maggie. Gregory goes for it after Ken’s death, getting Earl drunk to try to kill Maggie. However, Maggie survives and has Gregory executed for treason - and as a staunch reminder to Rick and Michonne what she believes should’ve happened to Negan. 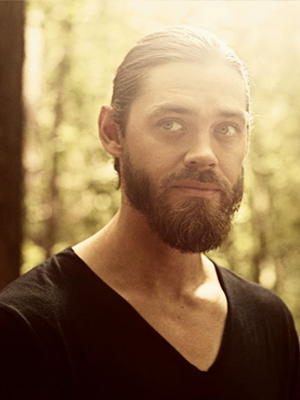 "Your world is about to get a whole lot bigger."

"This is the next world, hope it's good to you!"

A man who encounters Rick and Daryl while the two are on a supply run in season 6. He is a highly competent survivor and Gregory's second in command at the Hilltop, often sent to scavenge supplies for his community. Jesus helps the gang plot their attack on the Saviors, only for Maggie and Sasha to arrive at Hilltop after the group has been defeated and subjugated by Negan. When Gregory proves unable to defend Hilltop from a Savior attack and tribute, Jesus forgoes any loyalty to him and begins grooming Maggie to take over Hilltop, which comes to fruition by the season 7 finale.

During the Savior War, Jesus leads an assault in Simon’s outpost alongside Tara, and they clash as Jesus opts for sparing as many Saviors as possible, whereas Tara just wants to kill them all. Jesus ultimately wins out and convinces Maggie to spare and imprison their Savior POW’s. However, Jesus is upset when Rick decides to spare Negan, the one Savior he wanted dead, at the end of the war. Jesus is later put in charge of Hilltop by Maggie when she heads out west with Georgie, but hates being leader due to his lack of confidence in his abilities. Despite Aaron and Tara imploring him to take his responsibilities more seriously, Jesus never gets the chance as he is killed during a rescue mission by a walker revealed to be a Whisperer in disguise. 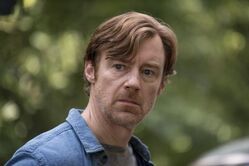 A doctor and obstetrician in the Hilltop Colony. He advises Maggie to remain in Hilltop for the remainder of her pregnancy. When his brother Emmett is killed by Negan, Simon conscripts him to work for the Sanctuary. During the Savior War, rescuing Carson becomes a top priority for AHK. He escapes with Gabriel thanks to Eugene, but is tragically killed by a Savior after attempting to escape while on the road to Hilltop. 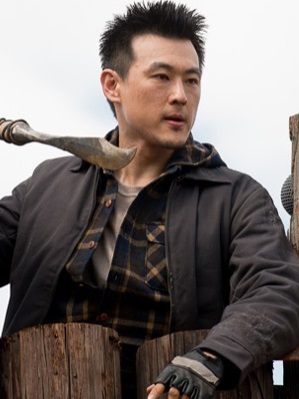 A guard of the Hilltop Colony. 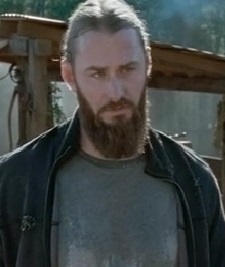 A member of the Hilltop Colony. 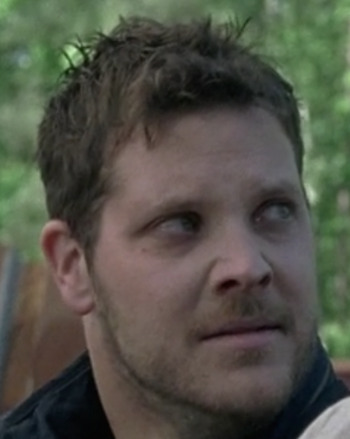 A member of the Hilltop Colony who agrees to help Alexandria fight the Saviors. He is one of the first casualties of the war during the attack on Simon’s outpost.

A Hilltop resident who lost his wife prior to the apocalypse.

A member of the Hilltop Colony.

A resident of the Hilltop who returns with Ethan.

A resident of the Hilltop.

A guard for the Hilltop.

Ethan's brother who is taken hostage by the Saviors.

A woodworker and member of the Hilltop militia. He is killed by Simon as punishment for Hilltop joining AHK’s rebellion.

A resident of Hilltop.

A resident of Hilltop and friend of Ken.

The son of Earl and Tammy. He is mortally wounded by a horse he was trying to save from walkers and gets bit, and dies from shock and blood loss. 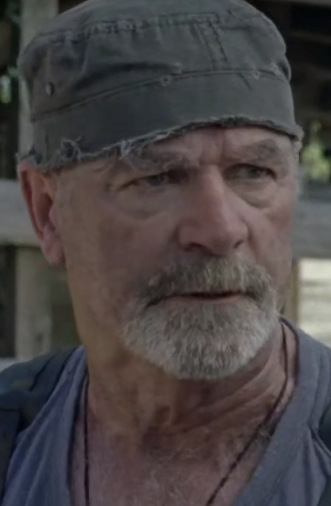 "Why did you hang Gregory and not me?"

"We're going to have to fight, and if we die, we die fighting for a place that means something. Can you think of a better way to go?"

Hilltop's chief blacksmith. He is the father of Ken and husband of Tammy. A year and a half after the Savior War, he and Tammy lose their son on a supply run gone wrong. Gregory gets him drunk and coerces him to attack and kill Maggie. However, Maggie survives and jails Earl, who quickly realizes the error of his ways once his senses return. After a harsh jail sentence, Maggie forgives him and releases him. Several years later, Earl and Tammy take in a Whisperer baby abandoned by his mother, Frances, on Alpha’s orders. Though hesitant to have another child, Earl is forced to raise the baby, who he names Adam, after Tammy is killed by Alpha. 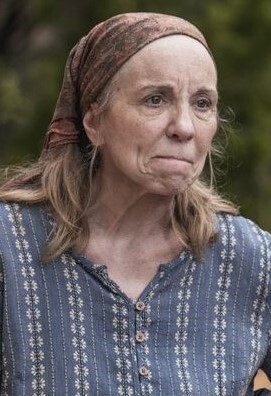 "I voted for you, Maggie Rhee, but we're not friends."

"Earl, you made a mistake. You... You lost yourself. But... But you came back. You're here now, and I forgive you. You hear me? God forgives you."

Earl Sutton's wife. She is angry with Maggie when her son Ken dies during a supply run for goods that ultimately went to the Saviors, but is aghast when Gregory kills her drunken husband into attacking Maggie. However, Tammy once again has it out with Maggie when she’s not allowed to see Earl for the entire month of his incarceration. Six years later, Tammy helps Daryl, Earl, and Connie rescue the Whisperer baby, and she and her husband quickly grow attached to him. Unfortunately, Tammy doesn’t even get to name the baby before she is one of Alpha’s victims in the pike massacre. Earl ends up honoring her wish to name the baby Adam as he begins raising him alone. 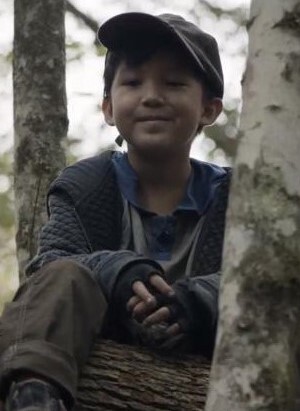 The son of Maggie and the late Glenn. He is born during the Time Skip between Seasons 8 and 9.

A messenger of Hilltop. 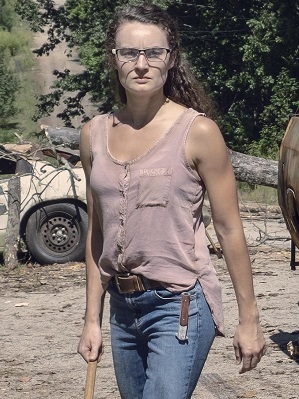 A teenager living in Hilltop who befriends Henry after he arrives from the Kingdom to train as a blacksmith. She quickly gets a crush on him and tries to woo him, but she doesn’t get much of a chance since he meets and falls for Lydia. She attends the fair and ends up as one of the victims of Alpha during the pike massacre.

A teenager living in Hilltop. He pressures Henry into drinking in the woods with him and his friends, and they leave Henry alone in a pit when he kills the walker they were playing with. Henry, Rodney, and Addy are all killed by Alpha, leaving Gage alone. He subsequently moves to Alexandria.

A teenager living in Hilltop. He and his friends Gage and Addy befriend Henry and take him drinking with them, but they leave him to fend for himself when he ruins their game with a walker. Rodney and Gage later bully Lydia at the fair, and Rodney ends up becoming one of Alpha’s victims in the pike massacre.

A couple who joined Hilltop two years prior to the arrival of the Whisperers. They are killed by the Whisperers on their way to the fair, and Alpha scalps Hilde, using her outfit and scavenged hair to disguise herself.