"The captain is a man who can change lies into the truth!!"
Click here to see his Pre-Time Skip appearance 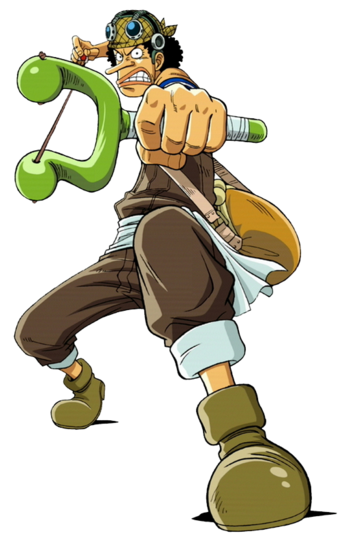 "He's right; I've told you nothing but lies!!! I'm no legendary hero!!! My name isn't even Usoland!!! I'm the sniper of the terrifying Straw Hat Crew!! My name is Usopp, and I'm a pirate!! I've been fooling you all!! It's your fault for believing me every single time!! (...) If I didn't [tell them], they'd wait for me until they died! I don't want that weighing on my conscience! So as thanks for their trust, I'd rather risk my life and go out with a bang! Wouldn't that make me look better?! My name is Usopp!! Remember that, Tontattas!! And if I should die, build me a statue next to Noland's!! Because I'm about to become your legendary hero!!!"
—Chapter 741
Advertisement:

A rather boastful seventeen/nineteen year-old who likes to tell tall tales, Usopp serves as the crew's sharpshooter, and previously served as the (barely competent) repairman for the Going Merry. He's the son of Yasopp, a sharpshooter serving under Shanks, and comes from the East Blue. He becomes the third of Luffy's recruits after the latter protects Syrup Village from Kuro. At first a cowardly liar with self-esteem issues, Usopp grows to be a dependable part of the crew. He specializes in the use of a slingshot, called the Galaxy Slingshot (Ginga Pachinko), which he replaced with the Kabuto and later the Black Kabuto. These slingshot, coupled with his talent in tricking enemies, and his absurd sniping skills, make him a redoubtable sniper able to intervene at a very long range.

His dream is to better himself and become a brave warrior of the seas, and while he's now quite brave, the challenges he faces have grown accordingly, meaning he usually keeps his usual attitude. According to Oda, he is the physically-weakest member of the crew, and his worries about not being able to keep up with the stronger members, with the resulting inner turmoil from that, put him at odds with Luffy during one story arc, and ultimately resulted in the creation of an alter ego dubbed Sogeking (a pun on "Sogeki" (Sniping) and "King", "Sniper King" in the English versions) which he uses to draw on his inner strength and courage.

In the New World, Usopp becomes known by the epithet "God" when, against overwhelming odds, he single-handedly frees thousands of people on Dressrosa from a Devil Fruit curse that had transformed them all into toys and enslaved them. The fact that the curse was a well-kept secret because it was the foundation of the Warlord Doflamingo's totalitarian regime, and had also erased all memories of those turned into toys from the minds of everyone who knew them (in some cases, for up to 10 years!), led some people to believe that Usopp must have been a divine messenger with miraculous powers in order to even know that they needed saving, on top of actually succeeding. Usopp's actions on Dressrosa also result in the formation of the Straw Hat Grand Fleet when some of the gladiators and pirates that he freed ally with the Straw Hats against Donquixote Doflamingo, and then decide afterwards to make the alliance permanent.

His bounty is 200,000,000 Berries.note His first bounty, as "Sogeking", is 30,000,000 berries. After the events of the Dressrosa Arc, the government finally recognizes Usopp himself by name and gave him his current bounty of 200,000,000 berries. In addition, he's given a new official epithet to go with his real name: "God" Usopp.