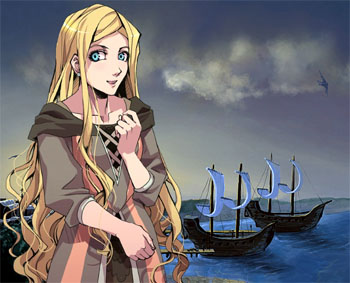 Heileen is a Ren'Py-based visual novel trilogy created by Tycoon Games/Winter Wolves about Heileen, a noble girl living in 17th century England. The series focuses on the developing relationships between Heileen and the other characters in addition to Heileen's maturation from a naïve, self-centered girl into a responsible young woman.
Advertisement:

In Heileen 1: Sail Away (2008), Heileen reluctantly leaves her happy, normal life in Liverpool on a voyage to the New World with her grouchy Uncle Otto and his mistress, Lora. Joining Heileen on her journey are Marie, her childhood best friend, and John, the attractive sailor Heileen has a crush on. During the voyage, Heileen stumbles into personal drama surrounding her friends and family, receives her first kiss, and uncovers a mystery on the ship.

In between the first and second game, the freeware flash game Heileen: A Trip to Bavaria (2009) was released. The game is a prequel to Heileen 1: Sail Away, and features Heileen's trip to Bavaria on her 16th birthday. Heileen meets and befriends Magdalene, a humble farmer. Heileen must leave for the New World, but Magdalene tries to convince her to stay. You can play the game at the Tycoon Games website

Heileen 2: The Hands of Fate (2009) leaves Heileen shipwrecked on a deserted island with Robert and Ebele. Amidst searching for other survivors from the wreckage, Heileen must discover a way off the island. Heileen finds a mystical deck of tarot cards representing the Seven Heavenly Virtues and Seven Deadly Sins. The tarot cards prompt flashbacks to her life and childhood back in England, in which Heileen must make key choices establishing life lessons she has learned. The cards can alter her past and generate items in the present according to Heileen's choices. Although the second game did not originally include voices, a voiced version was later released in 2010.

In the final installment, Heileen 3: New Horizons (2012), Morgan, an infamous pirate, and his crew rescue Heileen from the island. Heileen agrees to work on the ship in exchange for a chance to travel to the various nearby islands to search for her friends. By the conclusion of this game, Heileen must choose which profession she will go into. The expansion, Heileen 3: Sea Maidens (2013), added four yuri romances to the existing four het romances.

While the first two games offer a point-based system dependent upon the quests Heileen completes, the third game gets rid of this system and introduces a Raising Sim format in which Heileen learns skills that eventually lead her into a trade. Regardless, the focus in the series lies on the variety of endings and relationships you can get. The games can be downloaded from the Winter Wolves website

. Free demos are also available for all three games.

open/close all folders
Tropes Present throughout the Series
Heileen 1: Sail Away
Heileen: A Trip to Bavaria
Heileen 2: The Hands of Fate
Heileen 3: New Horizons