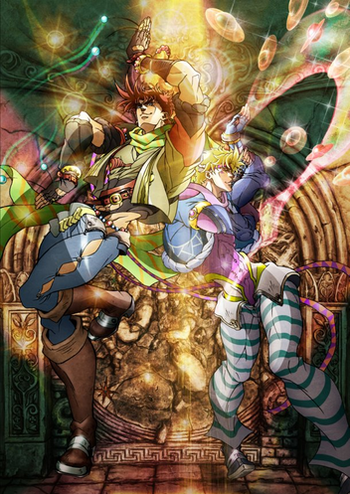 Set in 1938 right before World War II, Battle Tendency stars Joseph Joestar, the rough-and-tumble but extremely clever grandson of Jonathan who lives in New York City. When word gets out that Jonathan's best friend and Joseph's adoptive great uncle, Robert E. O. Speedwagon, has apparently been murdered, Joseph sets out to avenge him. However, after defeating Speedwagon's alleged murderer, he learns that Speedwagon is not only alive, but actually being held captive by the Waffen-SS in a research facility in Mexico, led by Commander Rudol von Stroheim. While rescuing Speedwagon, Joseph learns of Stroheim's latest discovery: a race of ancient, superhuman beings known as the Pillar Men, the original creators of the Aztec stone masks (like the one that Dio Brando used to become a vampire). After a heated fight with a Pillar Man in the research facility, Joseph heads to Italy in order to train for his fateful encounter with three more powerful Pillar Men with the help of Caesar Zeppeli (grandson of Jonathan's teacher William Zeppeli) and their mysterious mentor, Lisa Lisa.

open/close all folders
Tropes # to E
Tropes F to O
Tropes P to Z
Advertisement:
GAAAHH!!! OH NO! Unbelievable! What the hell was that woman thinking!? Wait!!
Feedback