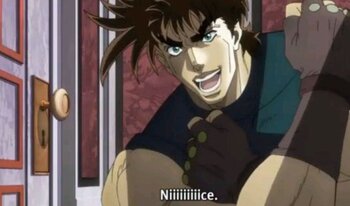 "Would it really be all that wrong if I took a peek through the keyhole to check things out?"note Yes. That's his mom he's peeping on. He doesn't know it...yet.
For memes involving other JJBA parts, see here.
Advertisement: