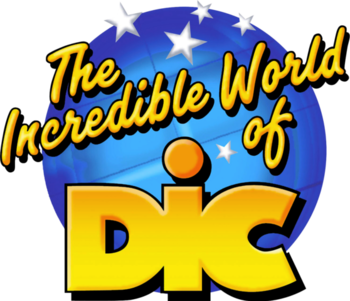 Get your mind out of the gutter. It's pronounced "deek".
Advertisement:

DiC Entertainment was a production company that started as a subsidiary of Radio-Television Luxembourg in 1971, that would go on to produce many kids' cartoons, particularly in The '80s and The '90s. Its name is an acronym for "Diffusion, Information et Communication". Originally founded by Jean Chalopin, DiC was acquired in 1986 by Andy Heyward, who continued to head DiC until its demise in 2008. Heyward is currently the head of Genius Brands International, which he bought in 2015.

DiC remained an independent studio for much of its days under Heyward's watch, until 1993 when it formed a limited partnership with Capital Cities, the then-parent company of the ABC network. It became a subsidiary of Disney after their takeover of Capital Cities in 1996. Unlike ABC, however, Disney had little interest in DiC, and so, Heyward purchased back DiC in 2000. In 2008, the studio was acquired by Cookie Jar Entertainment, which itself was acquired by WildBrain (then known as "DHX Media") in 2012. Currently, with certain exceptions, all of DiC's programming archive remain controlled by WildBrain.

DIC worked with TMS Entertainment early on note they also worked with other notable animation companies, such as Sunrise, Toei Animation, AIC, Ashi Productions, Studio Shaft, Hanho Heung-Up, Studio Pierrot, Studio Gallop and Wang Film Productions during this period, switching to studios like KK C&D Asia, Visual 80, Mook DLE, Hong Ying, Pacific Rim Animation, Saerom and Sei Young later on as Disney and later Warner Bros. were giving TMS more money for their shows. As a result, the higher-quality shows of the company's heyday in The '80s (including Inspector Gadget, Jayce and the Wheeled Warriors, M.A.S.K., Heathcliff & the Catillac Cats, The Real Ghostbusters, Rainbow Brite, Dinosaucers, and so on) gave way to cheaper cartoons such as the ones based on the Super Mario Bros. and Sonic The Hedgehog video games, some of which have gained a minor cult following since their release. It is also infamous among the anime community for its dub of Sailor Moon, although in that case it is often a subject of misblame since the voices, dub script, and most of the editing was done by Optimum Productions (their dubs of Saint Seiya, aka Knights of the Zodiac, and Speed Racer X can be laid directly at their feet however). Voice acting since The '90s were (mostly) provided by the talent pool of The Ocean Group in Vancouver, with some other shows recorded in Toronto, Los Angeles, Ottawa, and Omaha (or some mix thereof).

DVDs in the early 2000s distributed by Lionsgate, in which you can hear Inspector Gadget (who essentially served as the company's mascot and spokesperson) deliver an extremely long and detailed lecture on how to use them.