The characters of the series Fushigiboshi No Futagohime. You're gonna be here a while just reading on all of them. 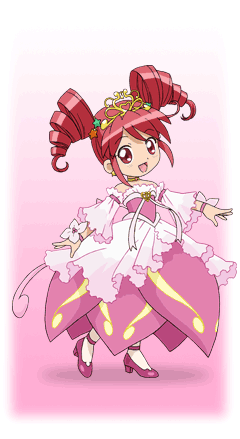 One of the twin princesses of the Sunny Kingdom, Fine is adventurous and athletic, but she is also very clumsy. She also adores cake, but is afraid of ghosts. 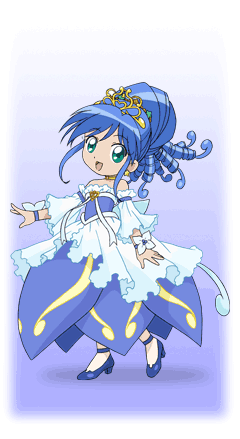 The other twin princess of the Sunny Kingdom, Rein adores dressing up and gets starry-eyed over romance. She also loves scary things and is more emotionally stable than Fine. Just like Fine loves her cake, Rein has eyes for Bright.

Poomo is a fairy sent by Princess Grace to train Fine and Rein to inherit her powers.

Fine and Rein's Old Retainer. She follows them around from time to time to keep a watch on them. Other times, she scolds them for not being "proper princesses".

The King and Queen of the sunny Kingdom. they were aware of the weakening of the Blessing of the Sun since the very beginning.

The legendary princess who once stopped the sun of the Wonder Planet from extinguishing and has now enlisted Fine and Rein to do the same.

Lione is the princess of the Meramera (Flame) Kingdom. She's very reserved, kind-hearted, and is talented at dancing.

Tio is the prince of the Meramera Kingdom and Lione's younger brother. He swore on his life to protect Fine and Rein, but he hasn't exactly done that yet. Later, he becomes Shade's self-appointed apprentice to learn his ways.

The King and Queen of the Flame Kingdom. They oversee the stone that uses the Blessing of the Sun's power to warm the Wonder Planet.

A massive dragon living inside a volcano near the Meramera Kingdom. He has a connection with Lione that allows her to interpret his words.

Altezza is the haughty princess of the Jewelry Kingdom who initially dislikes Fine and Rein on-spot. She's boastful and arrogant, but shows her more introspective sensitive side when it comes to her older brother, Bright, whom she looks up to.

Bright is the prince of the Jewelry Kingdom and is known as the no. 1 idol in the Wonder Planet. He's patient and somewhat of a pacifist, and despite that all the girls adore him, he loves Fine out of them all. This makes him feel threatened when Fine starts hanging around Eclipse...

The King and Queen of the Jewelry Kingdom.

Shade is the prince of the Moon Kingdom, but masquerades under a secret alias known as "Eclipse." He prefers to carry out his plans in the shadows and becomes somewhat protective over Rein when she is in danger.

Milky is the infant princess of the Moon Kingdom. She loves eating sweets and her older brother, Shade, a lot.

Roman is the Evil Chancellor of the Moon Kingdom who seeks to rule the Wonder Planet. His henchmen are his loyal Mooks who display surprising competence.

Milro is the shy, artistic princess of the Drop Kingdom.

Sophie is the airheaded princess of the Windmill Kingdom.

Auler is the prince of the Windmill Kingdom and is deeply besotted with Altezza.

Boomo is a fallen fairy and the mentor to Bright after his Face–Heel Turn. He is about as prone to Amusing Injuries as his Good Counterpart, Poomo.

Chiffon is the six-year-old Child Prodigy princess of the Mathematics Planet and is also the president of the student council. She quickly befriends Fine and Rein when they enter the Royal Wonder Academy and teams up with them to form Team Gemini. Since she is used to the strict school policities working against teamwork, she becomes interested in the twins' methods and the concept of friendship.

Thomas is the former prince of the Walpurgis Planet and is the vice president of the student council.

Bibin is a student of the Black Planet Academy and wishes to be crowned as its queen someday. She works with Ed-chin under the orders of the principal to ruin their rival school, the Royal Wonder Academy.