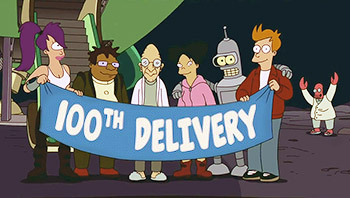 "Hey, I'm relevant, too!"
"It's like that friend who's an asshole, but he's our asshole."
— Nick Webber, Hot Tub Time Machine
Advertisement:

In a group of otherwise good friends, there's one character who's an unrepentant Jerkass to everyone else. Or, if they aren't downright mean or cruel, they may be so stupid, annoying, or just plain weird that it's embarrassing to be seen with them. In any case, asking a member of the group "Why are you even friends with him?" is a perfectly legitimate question. It can usually be answered with one or more of the following explanations:

It's not even that their friends aren't aware of their behavior, either. They're perfectly aware that the person is a jerk, or a geek, or a ditz, and will frequently treat them as such based on their behavior. They still get included in the group nonetheless, with the group often defending them if any outsiders insult or mistreat them.

In some cases, it's discovered that the group really does care about this friend and vice versa. In other words, "They may be a pain in the butt, but they're our pain in the butt." Often uttered right before such lines as "You mess with them, you mess with all of us!" or "We're not leaving anyone behind!" The character may have a breakout episode that explains the reason for their attitude or reveals a human side that never showed before (such as a cute hobby or a Hidden Heart of Gold).

More tragic examples may lead to the disliked character Jumping Off the Slippery Slope, and their former "friends" bitterly regretting that they tolerated someone so obviously malicious for so long. Mistreatment-Induced Betrayal can be at play if the friend gets fed up with the way they treat him.

This is Truth in Television. Chances are you have a "friend" like this (or multiple "friends"), or you may even be that "friend" yourself.

Compare Vitriolic Best Buds and With Friends Like These..., where this kind of attitude is usually limited to one or two select members of the group as opposed to being the opinion of the group as a whole (though the latter trope can compliment this one if one friend is actively disrespected enough by the others).

This trope may overlap with Loser Friend Puzzles Outsiders. However, in this trope the whole social circle hates the "loser" rather than an outsider to the group, and the person may actually have some cause for being disliked. In the other, the person is usually presented as being an innocent victim of prejudice, whether it's related to social Darwinism, jocks vs geeks, Slobs vs. Snobs, or racism, fantastic or otherwise.

If The Friend Nobody Likes is a protagonist or otherwise portrayed sympathetically, he may instead become The Woobie. The Friend may also be The Gadfly if they aren't an up-and-out jerk.

If someone is disliked to the point that people won't associate with them, All of the Other Reindeer is in play.

See also My Friends... and Zoidberg, The Complainer Is Always Wrong, No Accounting for Taste (when a romantic couple are similarly incompatible), and Token Evil Teammate.

Itadori discovers that no one likes Todo.

Alternative Title(s): The Friend No One Likes

Itadori discovers that no one likes Todo.