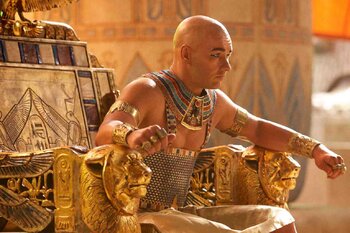 Nothing says "God King" quite like a smooth head.
Across works, bald people, in the rare times they even appear in a work, will often occupy a leadership position. Perhaps it's because bald people seem wiser than their full-head-of-hair-having counterparts, making them naturally come off as a Reasonable Authority Figure. Or, and this would especially be the case when Asskicking Equals Authority, maybe it's due to baldness being perceived as inherently tough, with bald people naturally embodying the kind of resilience and fortitude desired from an effective leader.
Advertisement:

Most likely this is just art imitating reality, given that older people tend to occupy positions of authority in society (due to having more experience) and older people (men in particular) are more likely to be bald than younger people. Even still, there are quite a few fictional leaders across genders and ages that are bald because of this trope.

Whatever the reason, the proof is in the examples: if they show up in a work and there's a group, team, or organization to be led, a bald character will often be The Leader of it. And by bald, we do mean bald: no "balding" or partial baldies here, complete chrome domes, only.

This can apply to any kind of leader, whether they are a leader of an entire country, a battalion, a precinct, or are the head manager of a home goods store. What matters is not just the formal position they occupy in a group or organization, but also that they are treated by those around them as the main person to defer to for leadership, direction, agenda setting, and commands. Bald leaders who have Authority in Name Only are subversions of this trope. And remember: leaders can be morally and ethically good, evil, neutral, and everything in-between; this trope can and often does overlap with Bald of Evil.

For bald characters who don't necessarily lead a group, but use their wisdom and enlightenment to provide guidance and advice in a more Mentor Archetype way, see Bald Mystic. For headwear that serves a similar purpose, see Hat of Authority.

No Real Life Examples, Please!, as this is a characterization trope.