Here is the list of the characters introduced in the manga of Yu-Gi-Oh! ARC-V.

A mysterious Entertainment Duelist who hacked into the Leo Corporation's Solid Vision System. Leo Corporation is pursuing him because of this and also because of his ownership of Pendulum Summoning, a method never otherwise seen and which Reiji is attempting to study.

Yuya is the primary personality of the Phantom, but also shares his body with three others, one of those being Yuto. They switch out based on which personality is most needed at the time, or in Yuya's case, when he wants to entertain someone and won't take no for an answer. 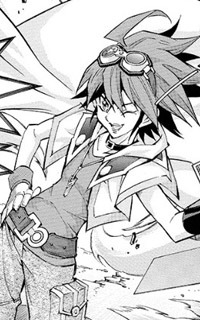 An entertainment duelist that is wanted by Leo Corp for hacking into their Solid Vision system. Yuya plays an Odd-Eyes and Performapal deck, with the ace monster being Odd-Eyes Phantom Dragon, a Level 7 Pendulum Monster. 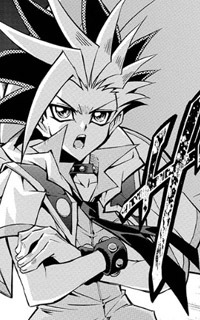 Yuto is another of the Phantom's personalities, and the first one shown in the story. Contrary to Yuya, Yuto is a more serious and responsible figure, focusing on the Phantom's main mission and getting them in and out of danger unscathed. He is less known than Yuya is, to the point that Yuya's enemies are actually unaware prior to the first chapter that Yuto even exists.

While he treats Yuya something like a ridiculous charge whose antics he has to put up with, he worries about him when he's at risk, and chooses to fight Leo Corporation in Yuya's stead in the early chapters. When not in control of the body, he appears as a ghostlike figure alongside Yuya, visible and audible to nobody except him. 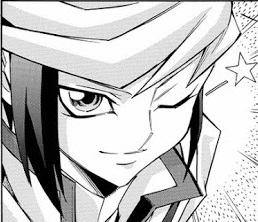 Yugo is one of Phantom's personalities. Like his anime counterpart, Yugo is a hot blooded guy who cares for Yuya, volunteering to chase down the person who invaded his mind. In his first appearance, he and Yuri journey off in Yuya's mind, erasing memories to keep him from remembering something. 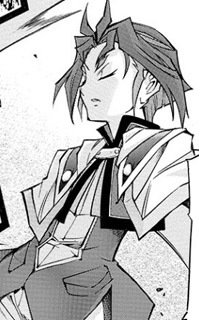 Yuri is one of Phantom's personalities. While he displays more concern for Yuya's wellbeing than some might expect of him, he continues to be ruthless to enemies, chiding Yuya for being "soft" and taking over when a colder hand is needed. Yuya doesn't see him as often as Yuto, but is obviously still familiar enough with him to complain the first time Yuri takes over the body in the manga - notable in that, like Yuya, he appears capable of taking control without permission from the current personality.

Like in the anime, he is shown to play a Predaplant deck spearheaded by powerful fusions monsters like his Starving Venemy Dragon, which also happens to be a Pendulum monster. 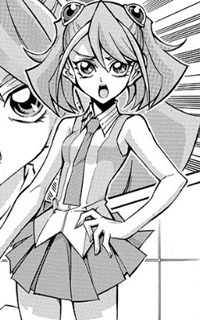 The daughter of the Shuzou Duel School's owner. She plans to recruit the mysterious duelist known as "Phantom" in order to attract more students. While coming off as a bit of a cheapskate given her father's tendency to drive their duel school's funds into the red on a monthly basis, she cares deeply about her father's situation, and her first order upon contracting Yuya unwillingly is for him to continue his mission. She still insists he teach at Shuzou Duel School on the side, though.

While not visibly a duelist yet, Yuzu is quite intelligent, having come second only to Kurosaki at a mental math tournament a few years prior to the series, and takes an interest in Yuya's mission as the Phantom. 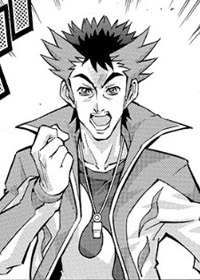 The owner of the Shuzou Duel School, who has all the enthusiasm of a good principal, but none of the business sense needed to keep his school open. When we first see him, his duel school is on the brink of shutdown due to lack of funds, and it's Yuzu who's the one to make him see sense and try to save the school.

While he seems to have accepted Yuzu's idea to have Yuya teach at his school, his attitude towards the Phantom's multiple personalities is less enthusiastic. 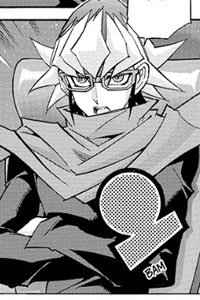 The head of the Leo Corporation. He wishes to capture the mysterious duelist "Phantom" for hacking into his company's Solid Vision System. Little is known about him as yet, but he is attempting to research the Phantom's summoning method, Pendulum Summon, and to this end has recruited a three-man special squad to track down and defeat him: Sawatari, Shun and Sora.

Like his anime counterpart, he plays a D/D deck but with a different aesthetic and playstyle. He focuses solely on using pendulum monsters whose effects allow him to reduce the stats of his opponent's monsters, the damage he would take or even his opponent's pendulum scales to zero. 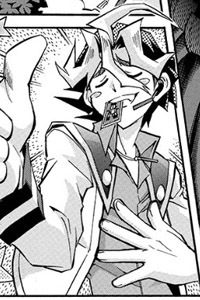 A member of a special squad working for the Leo Corporation. Similarly to the anime, he thinks of himself as much tougher than he is and likes to show off, but also takes his work quite seriously and his response to losing to Yuya is to actually go and try to improve his skills for a rematch. His reasons for working for Reiji are unknown, but given his uniform, there's a chance he's simply a high-ranking student.

He runs a Monarch Deck, so far focused on DARK Monarchs such as Erebus the Underworld Monarch and Angmar the Witch Monarch, using cards that help with their summoning or allow for their effects to be re-used. 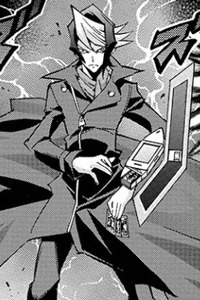 A member of a special squad working for the Leo Corporation. Is obsessed with serious duels and playing on the edge of defeat, stating that "coming back to life is the only joy I know!" He acts on his own to lure out and duel Yuya, as he loathes people who enjoy dueling and don't take it seriously, and is stated to have been picked up by Reiji on the underground dueling circuit. He doesn't care about Reiji's mission or tactics; he's only interested in playing "real" duels against powerful opponents. After his loss to Yuya, however, he seems to have softened slightly and reconsidered his attitude.

As in the anime, Shun runs a Raidraptor deck, but with cards that he's never played there. His ace monster this time is the Rank 4 Xyz Monster, Raidraptor - Blade Burner Falcon whose effects relies on him having less life points than his opponent. 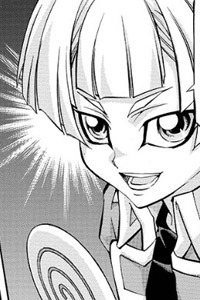 A member of a special squad working for the Leo Corporation. His motives for joining Reiji are unknown, but he seems to have some suspicions about Reiji's goals and intentions, and thinks he might be lying to them about Yuya. He looks down on his fellow special squad members to some degree; Sawatari for his grandstanding and idiocy, and Kurosaki for his overly serious opinion on what dueling should be for.

Like in the anime, he plays a Frightfur deck specializing in Fusion summon using the Fluffal and Edge Imp monsters but with added focus on inflicting burn damage. Later on the story, his deck changes to include regular Frightfur monsters on top of his Extra Deck ones.

A researcher on Solid Vision and Reiji's father. He was first mentioned, alongside Yusho Sakaki, for triggering the "World Illusion". 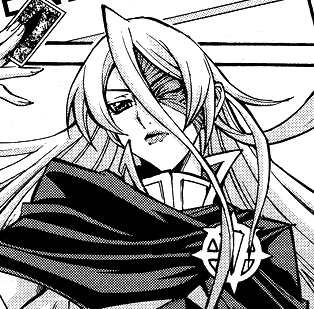 A woman who was watching Sora's duel with the Phantom. She orders Ren to retrieve him after his loss to Yuya and then enter Yuya's memories. She is currently in possession of the Genesis Omega Dragon card. She plays a Mystic deck which revolves around summoning powerful monsters withing a single turn. 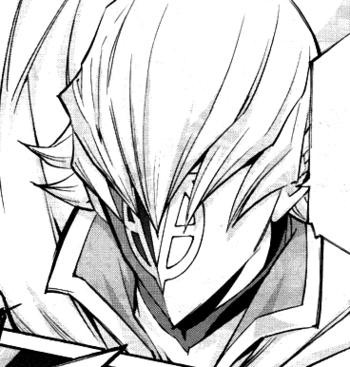 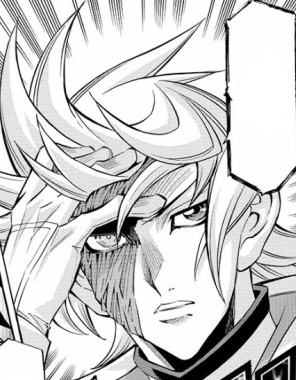 A masked man who works for Eve. He rescues Sora after the latter's duel with the Phantom before investigating Yuya's memories. He is a Riding Duelist and uses a White deck that uses monsters resembling various sea creatures with the ability to become tuners when revived from the graveyard to perform Synchro summons. 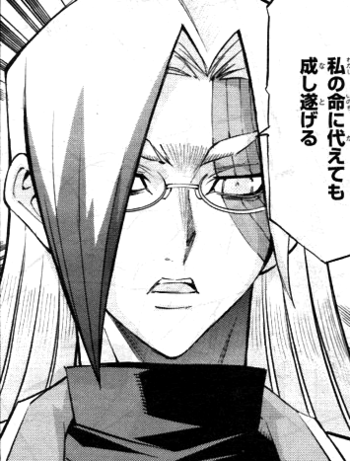 Another member of Eve's faction, who is first seen taking care of an injured Sora. He plays a Mirror Imagine deck which focus on performing combos that involves using the effects of multiple cards in a row.

Yusho Sakaki
Yuya's father. He used to work with Leo Akaba and was first mentioned alongside the former for being the ones who triggered the "World Illusion" incident.

Miu Shin'in
Sora's little sister. He claims Reiji is using her as a hostage to force him to duel Yuya to ensure her safety but Yuri takes over and exposes the truth that he was lying about having a sister in order to make Yuya lose. But it turns out that Miu is real with Sora having lost his memories of her. 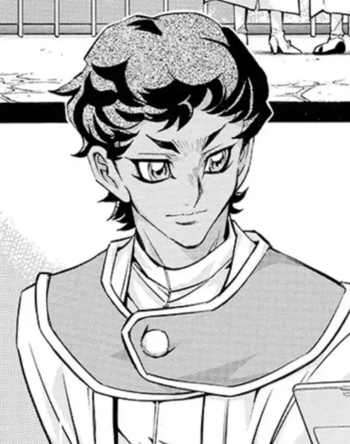 A scientist who once worked alongside Eve and Isaac. 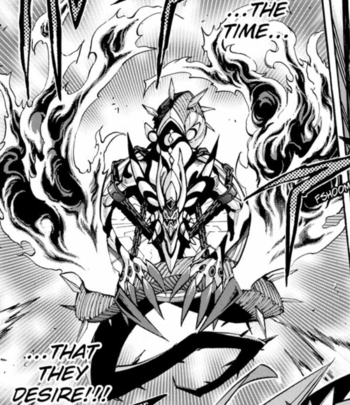 A dragon Pendulum Monster that is responsible for destroying various worlds.