This page details the various denizens that reside in the Reef, far away from the Traveler's Light, as well as their direct allies.

During the Collapse, every ship capable tried to flee Earth, but made it no farther than the inner asteroid belt. The descendants of these refugees became the Awoken. Rather than return to Earth, the Awoken of the Reef set up their own society, avoiding both the Traveler and the Darkness. After the Fallen House of Wolves invaded the Reef, the Queen managed to kill their Kell and made them vassals, offering the Fallen a permanent home with the Awoken. Relations with the Guardians and the Last City have been cold at best and hostile at worst, but this changed with the rebellion of the House of Wolves.

Mara Sov, the Queen of the Reef 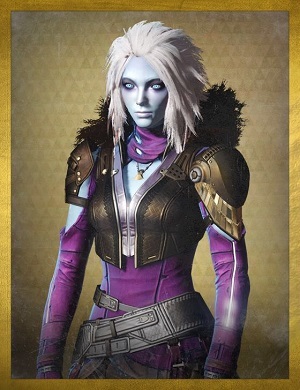 "It is alive. And still has its ball."

A stoic and unfriendly questgiver who always refers to the player as "it," Queen Mara Sov is the ruler of the Reef, a debris field located in the Asteroid Belt. It is home to both the Awoken and the Fallen House of Wolves, which became vassals of the Queen after she killed their Kell. Straddling the border between Light and Darkness, the Queen is disinterested in the City at best and outright hostile at worst. 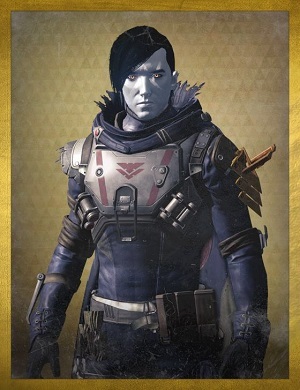 "The Queen herself judges who may or may not enter the realm. Me? I see no reason she should be available for whatever washes up at the reef."

The Queen's confidant, chief enforcer, and brother. Unlike his sister, he is upfront about his distrust of the City. He is driven insane after the apparent death of his sister during the events of The Taken King, and becomes the main villain of Forsaken. 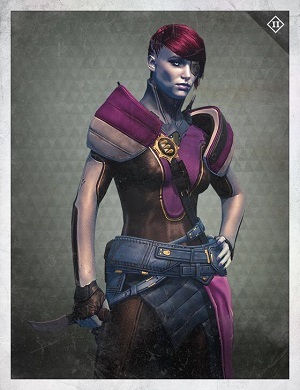 "Last week I was delivering court messages. Today we're delivering explosions! I love fieldwork! Get after them, Guardian."

An emissary of the Queen of the Reef, Petra Venj first appeared during the "Queen's Wrath" special event. She returned to Reef, where she was elevated to serve as the Queen's Wrath and becomes the Guardian's story agent during the House of Wolves. She returns in Forsaken, calling the assistance of Cayde and the Guardian to stop the Scorn. Following that expansion's main campaign, she ventures into the Dreaming City, determined to find Mara Sov and free the place from the evil that has crept in. 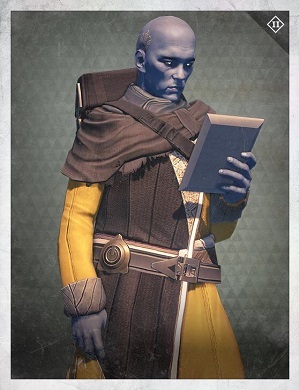 "You'll find that the Reef Cryptarchs are somewhat more competent then that Rahool."

A member of the Cryptarchy, Ives serves as the Master of the Palace Division. He is sent by the Queen to the Vestian Outpost in order to decrypt engrams for the Guardians who arrive in the Reef to hunt down the Queen's bounties.

A Paladin in the Royal Armada.

A officer in the Royal Armada during the Reef Wars, Fen was promoted to Paladin during that conflict.

One of the Queen's last seven Techeuns. She was Taken alongside Sedia and Shuro Chi by Oryx when he invaded the Dreaming City during the events of the Taken War in the first game. She is the first boss of the "Last Wish" raid, serving as one the last lines of defense for the mastermind seeking to corrupt the Dreaming City.

One of the Queen's last seven Techeuns and second of the three shown and explored in Forsaken. She was Taken alongside Kalli and Sedia by Oryx when he invaded the Dreaming City during the events of the Taken War. She is the second boss of the "Last Wish" raid, serving as one the last lines of defense for the mastermind seeking to corrupt the Dreaming City.

One of the Queen's last seven Techeuns, and the final of the three shown and explored in Forsaken. She was Taken alongside Shuro Chi and Kalli by Oryx during his invasion of the Dreaming City parallel to the raging Taken War. Unlike Kalli and Shuro Chi, who formed a line of defense in the "Last Wish" raid, Sedia is found in the depths of the Adytum. She is the boss of "The Corrupted" strike, where Petra instructs you to free the Techeun from the Taken corruption. 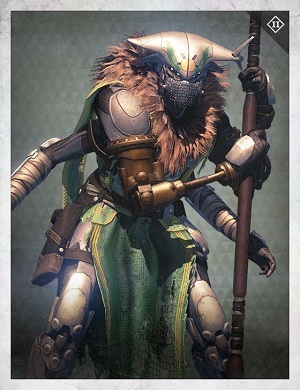 "All that are Fallen are not lost...yes?"

Unfortunately, this loyalty would be tested with the Queen's absence and the Fallen's dwindling numbers throughout the years, and Variks would eventually abandon his post to go unite the Fallen in his own way, causing a chain reaction that kickstarts the plot of Forsaken. Following his disappearance into the wild, the Praxic Order marks him as an outlier with the designation of VIP #1121.

Two years after the events of Forsaken, Variks would send a distress call on Europa, alarming anyone who can respond of a rising Fallen empire led by Eramis, the self-styled Kell of Darkness; this kickstarts the Beyond Light expansion.

"An old friend has come. Judgement at hand."

Variks' pet Servitor, modified to monitor the Prison of Elders challenges and allow the former to send out announcements to the competing Guardians. During the events of Destiny 2, Variks left the prison amidst the mass prison break, leaving the Servitor alone and causing it go mad, convinced that it was Variks. The Mad Warden is the boss of the "Warden of Nothing" strike, with the Drifter sending you on a mission to put it down.

The Spider, The Shore's Only Law 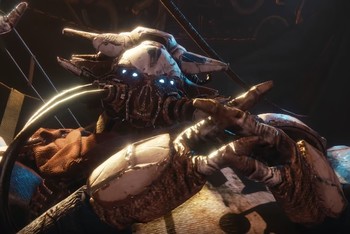 "I cannot wait to see how this ends."

The clever and engimatic leader of the Fallen residing in the Reef's Tangled Shore, the one they call the Spider is a master negotiator and influential crime syndicate boss. He isn't too pleased with the Scorn causing chaos in the Shore, and so teams up with the Young Wolf and Petra Venj to hunt down Uldren Sov and the eight Barons.

Black Armory reveals that he is, for some reason, linked to the titular Armory, likely due to their prejudice towards the Light.

Riven of A Thousand Voices 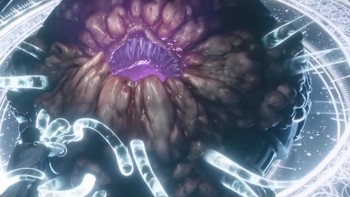 In the Last Wish 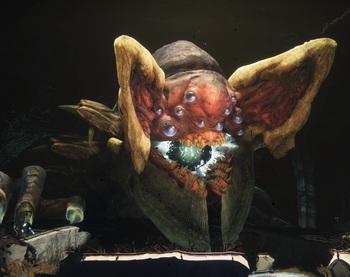 Voiced by: Various * Riven speaks to you telepathically, and she takes the voice of many members of Destiny 2's supporting cast
"Only Light and Dark together can open my way back into your world!"

An Ahamkara who formerly was supreme among the Awoken's many kept secrets. While she lived, she did much for the Awoken, trading ageless knowledge and wisdom in their bargains with her. During Oryx's incursion into the system during The Taken King, he strode into and conquered The Dreaming City, and Took its Techeuns and Riven herself. While Taken, Riven broke free of her limitations as an Ahamkara, and seeks to free herself from the seal placed on her in the Dreaming City. Riven is the true antagonist manipulating Prince Uldren during Forsaken's main story, and is the final boss of the Last Wish raid.