This page details the species of ever-expanding machines that have relative power over time and space and, like the Hive, similarly invade the Solar system for dominion.

Main Character Index | Active Guardians | Historical Guardians | Guardian Classes | Uldren Sov/The Crow and Glint | The Tower | The Reef | The Fallen | House of Devils | The Scorn | The Cabal | The Vex | The Hive | The Taken | The Darkness | Other Characters and Entities
Advertisement: 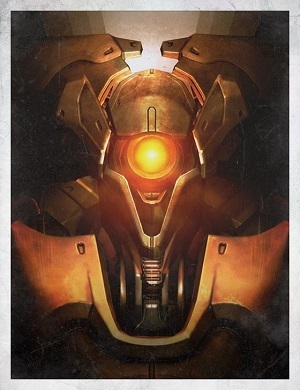 A linked-mind species of liquid radiolarian fluids inhabiting mechanical bodies which lurk in vast complexes and ruins throughout the Solar System. While they are most commonly encountered on Mars and Venus, they have also claimed and transformed Mercury into one of their "machine worlds" and have subjected 7066 Nessus to the same fate and are in the process of converting the Jovian moon Io. They have a terrifying mastery of time and reality-manipulation. 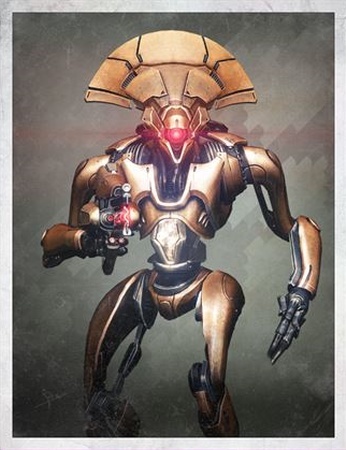 The most basic form of Vex units, Goblins are construction drones that are common in all Vex structures. 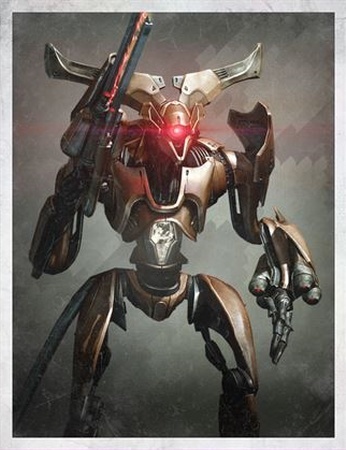 "The air by my cheek twanged twice, stinking of ozone, before I saw it."

Hobgoblins are Vex units deployed like snipers, and when attacked they will try to enter an emergency stasis mode to keep themselves intact while other Vex engage the attacker. 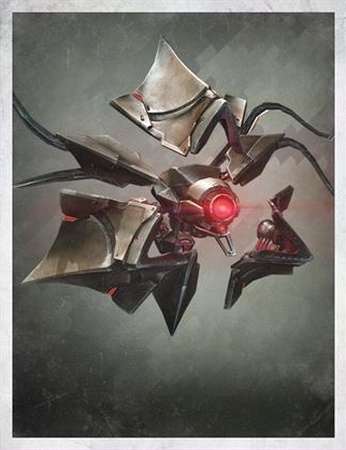 "It swam back and forth through the air, spinning, the single red eye looking — I realized — for me."

Mobile, airborne scouting units that patrol around Vex ruins for threats. when a Harpy encounters an enemy, they have to unfold and deploy their weaponry to engage. 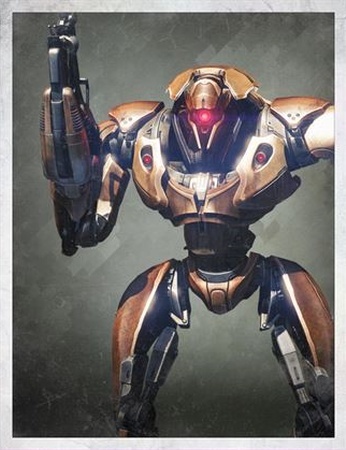 "I thought it was at a safe distance. I was wrong."

Command units for a local Vex network, Minotaurs are massive, powerful platforms with heavy weapons and shielding which operate like tanks and long-range support artillery. 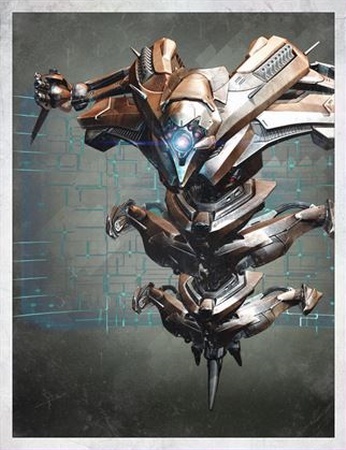 "Our shots dissolved in the translucent matrix around it, useless."

A slow, mobile fortress, Hydras are often the hubs of the networked Vex intelligence, receiving and transmitting information from other Vex units, and are surrounded by barrier shields which deflect incoming fire, while they return it in equal measure.

A Vex unit that debuted in the Vault of Glass, these are Goblin frames with their head and left arm missing. 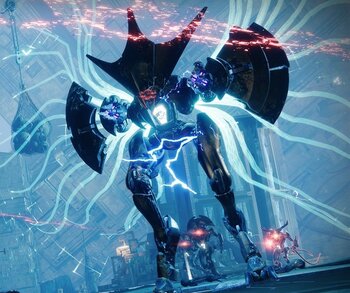 A highly resilient Vex unit first encountered on Europa, the Wyvern acts as a mobile weapons platform and enforcer for the weaker Goblins. 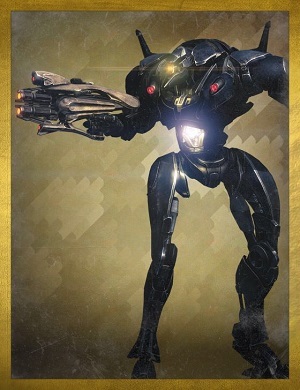 "The intelligence we call Zydron seems to exist in a liminal state, stretched between gates in the Vex network. It manifests as a physical being only when called."

A Vex Gate Lord that administers over the Vex gate network on Venus. The player Guardian must kill it in order to recover the parts it uses to access the network and enter the Vault of Glass. 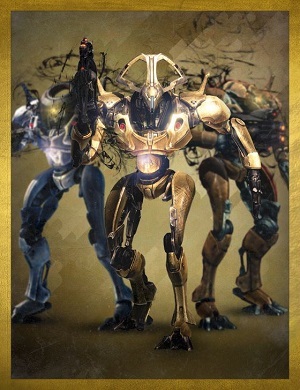 "The Vex, for all their voracious intelligence, could not understand or decipher what they found. They searched through all available reactions, and they settled on the course with the greatest payoff... to worship this power, and to remake themselves in its image."

A trio of Vex units at the center of the Black Garden. 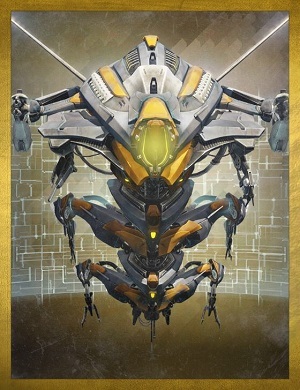 "The Vanguard's intelligence sources now believe, with good confidence, that Sekrion oversees the expansion of the Vex network through the crust of Venus."

One of the Vex's most powerful platforms on Venus and the boss of the Nexus Strike, Sekrion oversees the slow Hostile Terraforming of the planet. It resides deep inside an Ishtar Academy dig site, far below the earth. 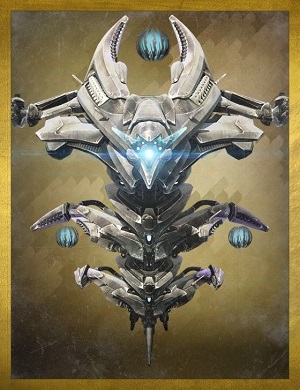 "Fragmentary glimpses and scattered reports suggest a Hydra of impossible capabilities — a creature out of time."

One of the bosses of the Vault Of Glass raid. It summons Fanatic Vexes to kamikaze, Harpies to gun you down, and Oracles to Mark you for Negation. One of the toughest bosses in the game. It's a much tougher and larger Hydra, but compared to even Sekrion, it remembered to get a shield that covers it completely. 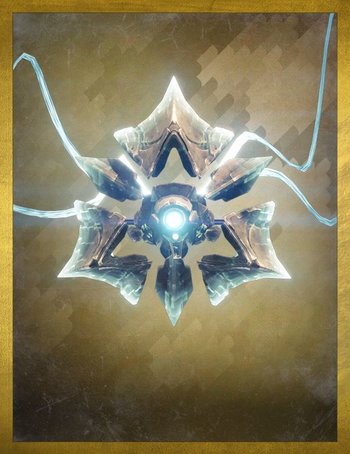 "Like the Oracles and the Templar, the Gorgons reputedly possess the ability to define what is and is not real. Whatever they perceive becomes subject to erasure at their will. Until a countermeasure can be found, Guardians must avoid their gaze at all costs — or reply to any detection with immediate, overwhelming force."

Nine (or thirteen if you're playing hard mode) specialized Harpies within their respective maze that patrol around it, searching for things that are and are not real. 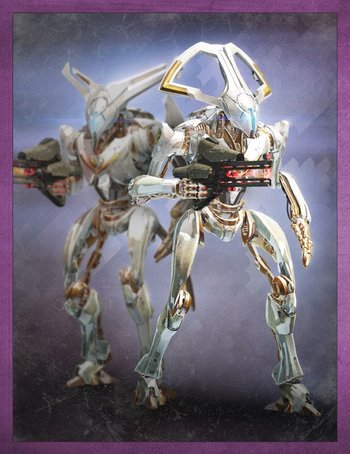 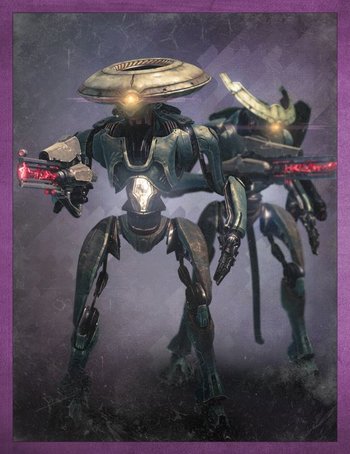 The Descendants
Those who delve deep into the Vault of Glass have seen time itself torn asunder. Awestruck Ghosts report encounters with ancient Vex, their casings built long before the age of humanity. It would be easy to assume these Vex are the ancestors of those we face today — but with the Vex it is never so simple.
~Precursor Grimoire
Survivors of the Vault of Glass report sightings of ancient Vex — ancient in the sense that they have endured for eons. Convergent analysis from multiple Ghosts suggests that these Vex exist in our future. If the Vex exist in our future — or in a possible future — should we take this as evidence that their defeat is impractical or unattainable? The Guardian Vanguard is quick to point out that time travel remains a mystery, and that the continued existence of the Vex is not remotely a sure indication of humanity's extinction.
~Descendant Grimoire

Two programmings of Vex units that exist in the past and future, respectively. They make their first appearance in the final part of the Vault of Glass, while the Precursors make their second appearance as a part of The Undying Mind strike. 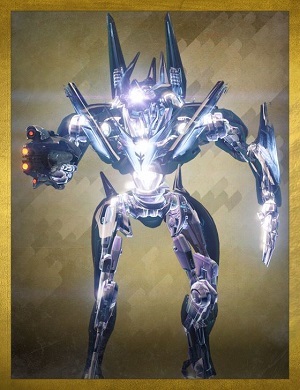 "To speak of Atheon is to accept certain limitations. We are ill-equipped to understand an entity that defies simple causality. Let us accept these limitations and proceed."

The final boss of the Vault Of Glass and the Vex Axis Mind speculated to regulate the Vex conflux system across time. 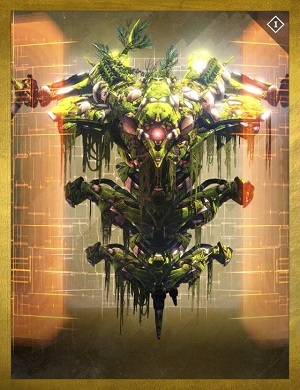 "We are starting to believe that time is home to the Vex, and somewhere in those unmappable voids dwell their undying minds."

The boss of the strike of the same name, The Undying Mind has only one mission: Lock the Black Garden back out of time, and then revive its Heart. 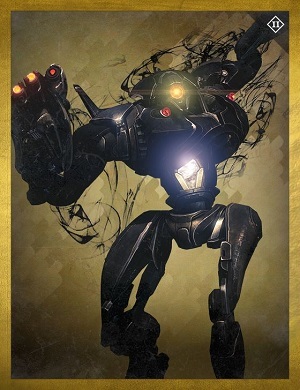 "It is no prisoner. It is here with purpose."

Of all those jailed within the Prison of Elders, Qodron is unique in that it is not truly a prisoner. Rather, it's exactly where it wants to be. Qodron is on a mission to ensure its own glorious future, and that mission requires the death of a certain Guardian who will someday enter the Prison in search of the Reef's riches. 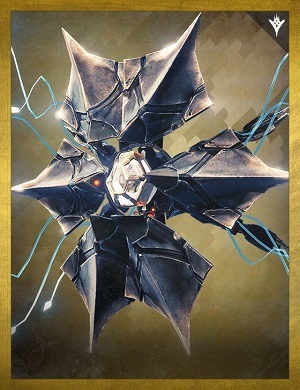 "Restorative Minds are of the Weavers, carrying the means to undo any Mind's undoing."

The boss of the Echo Chamber Strike, Theosyion is an Axis Mind charged with undoing the death of Sekrion, which it intends to do by summoning Sekrion into the present.

A Taken Hydra, having been captured and imprisoned in the Prison of Elders. 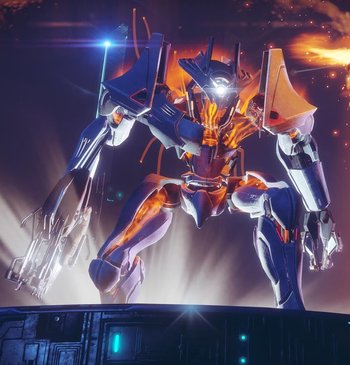 A Vex Mind hidden on Nessus and the boss of "The Inverted Spire" Strike. 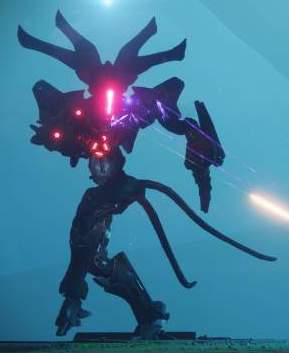 A giant Hobgoblin and resident of the Pyramidion stationed on Io. Brakion has the notable ability to mechanize Guardians who cross its path, as Asher Mir found out the hard way.

Ever since that incident, Brakion has become the sworn enemy of Asher. It is eventually killed during the Pyramidion strike.

A Hydra Axis Mind that was trying to pump... something into Io.

A Vex Mind guarding the map of the Infinite Forest. 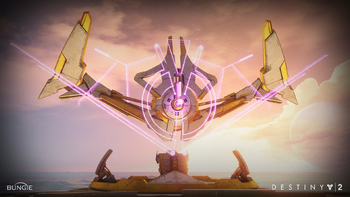 A Vex mind tasked with protecting Panoptes source code. Was the vanguard for the assimilation of Mercury, hence the name, though not the leader of the effort. After the events of Curse of Osiris, Osiris tries to use its remains to control the Infinite Forest, only for the Root Mind to break away from his control and attempt to take over Mercury, requiring you to destroy it again in the "A Garden World" strike.

Two Minds, a Minotaur and Hydra, that command the Vex within the Leviathan's Menagerie. 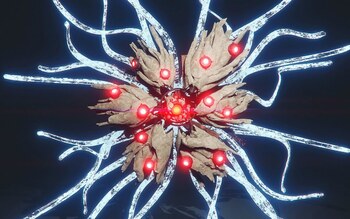 A warped Harpy belonging to the Sol Divisive and the first major threat faced in the Garden of Salvation raid. 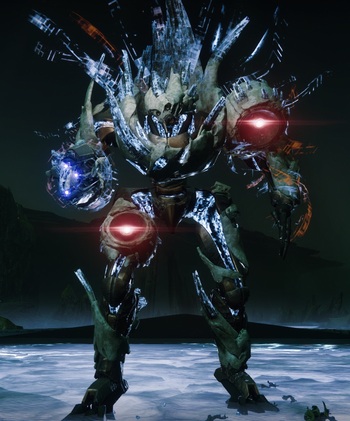 A leader of a patrol squadron on the Moon who holds the final key to one of the Black Garden's biggest mysteries with the Guardians who have visited it.
Agioktis

A giant Descendant Hobgoblin the Vex created to steal Saint-14's Light in the Infinite Forest. 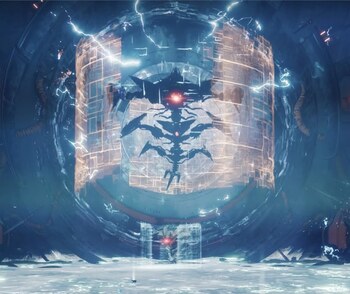 An ancient, oversized Hydra awakened when Eramis rebooted a Vex gate in the Glassway in an attempt to continue Clovis Bray I's research and production of Exos.

Three Vex Minds encountered in the deepest layers of the Vex simulation space collectively known as the Nexus, the Subjugated Minds contain access to heavily encrypted data vital for thwarting the Endless Night.

Existing with the fundamental core of Vex programming and logic, they are able to weaponize database computing and programming to manipulate their surroundings by uploading encryption algorithms and security programs.

Even deeper within the Nexus lies these Vex minds maintaining their iron grip on the Endless Night. Destroying them and decoupling the connections they have made in their cognitive space slowly but surely begins to heal reality back on Earth. 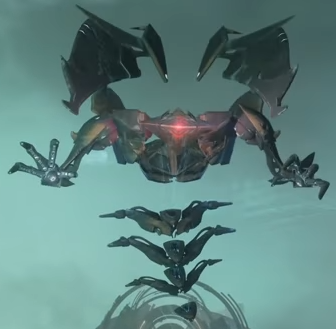 The Vex mind in command of the Infinite Forest. 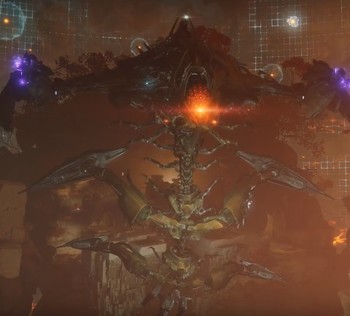 A massive Hydra that serves as the core of Nessus that wound up being sucked up into the Leviathan. It is the only boss of the "Eater of Worlds" Raid Lair