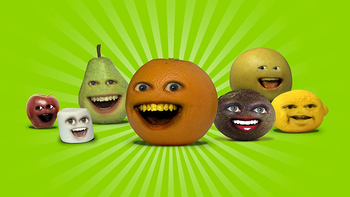 is an animated web series hosted on YouTube, involving a talking orange who is annoying. The videos usually revolve around Orange and his friends meeting a fruit, vegetable, or some sort of Animate Inanimate Object, as Orange proceeds to heckle them to the very brink of madness, right until the character meets a sudden and grisly end.

It was created by Dane Boedigheimer

, who had, along with his company Gagfilms, previously made several videos about talking food, including some for Jib Jab.

The show had an immense and unexpected popularity, with his first video

reaching several million views. After noticing what a hit his creation turned to be, Daneboe started posting new videos more regularly, and at present a new episode is out every Friday.

In summer 2012, The High Fructose Adventures of Annoying Orange, a TV series, premiered on Cartoon Network to successful ratings. After airing two seasons, the show went on hiatus after the second season ended in May 2014, and in December 2014 Daneboe confirmed that the series had been cancelled. A rumored third season for May 2016 did not show up.

There was a spinoff, Liam The Leprechaun, starring the eponymous Transplanted character until Bobjenz deleted all of his Leprechaun videos for unknown reasons. There's even a chatbot

. Also, there are a couple of games: the Licensed Game Kitchen

(which also has HD

Example of:
My Sister Is Off-Limits!