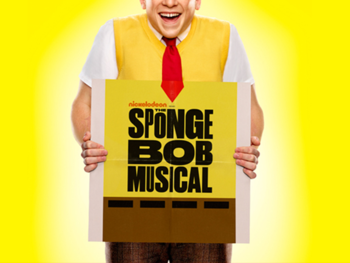 Not a simple sponge.
THE END. IS. COMING!
Advertisement:

A Broadway musical based on Nickelodeon's megahit SpongeBob SquarePants that features the titular characters as they try to deal with a volcanic eruption threatening to destroy their town. Having been described as Our Town meets Armageddon (1998), the play is also notable for featuring various songs written by renowned recording artists in the music industry, a list of which includes Panic! at the Disco, Sara Bareilles, John Legend, David Bowie, Cyndi Lauper, The Flaming Lips and They Might Be Giants, to name a few.

In this adaptation, the characters remain as their respective original species, albeit with some anthropomorphism (as to be expected) and therefore appearing more human (with some adjustments). While its development has been criticized as simply being another way for Nick to milk its cash cow, reactions from both critics and the public have been widely positive, citing how it pays tribute to its cartoon roots while being creative, funny and heartwarming. It was nominated for 12 Tony Awards, tying for most nominations for 2017 with the musical adaptation of Mean Girls.