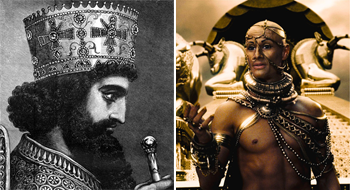 King Xerxes: Hair vs. Nair.
In a real historical piece, if they tried to make everything slavishly right any show would be unwatchable, because there would be too much that the audience couldn’t understand. The audience would be constantly distracted by details like un-filmably dark building interiors, ugly missing teeth, infants being given broken-winged songbirds as disposable toys to play with, crush, and throw away, and Marie Antoinette relieving herself on the floor at Versailles. [...] We cannot make an accurate movie of this — it will please no one.
— Ada Palmer on historic accuracy in fiction

Ah yes, history, written by the victors, with all the eyewitnesses lost to time... Some say it's one of those mysteries that man cannot know... That in the end, all known history is subjective and therefore useless as a source of knowledge...

Not so. Large chunks of history are well-documented, with many living traces in contemporary life — roads paved on pathways carved by ancient civilizations, languages and slang that evolve from a particular regional starting point, architecture from various eras, fashions plucked from various times, materials used for tools and production, etc.

But all of this is secondary to telling a good story. In most cases, historical works focus on a particular event taken out of context, revolving around a set group of individuals and depict the events with the pictorial and narrative structure as per the fashions of the year of its exhibition. Real history is filled with a vast array of characters with plenty of Hero of Another Story. In addition, many writers commit what's called the "historian's mistake", which is the idea that historical characters acted and made their decisions with full knowledge of the future — including the repercussions their actions would cause (like for example portraying Churchill as saying his Darkest Hour Rousing Speech with knowledge that Nazi Germany was going to be defeated in 4 years).note This is also known in psychology as Hindsight Bias

. Although some historical individuals made predictions that came true, this is not the same thing as knowing what would happen. For instance, a character in 1919 could plausibly predict that the Treaty of Versailles would cause hardship, anger and instability in Germany (indeed, Marshal Foch himself said at the time it was "not a peace treaty, just an armistice for twenty years", if only because he understood it to be too lenient), but it would be stretching it for him to confidently assert that the instability would specifically result in the rise of a ruthless racial supremacist paramilitary regime in Germany that would be hellbent for revenge starting the biggest war in human history and along the way, responsible for the systematic murder of millions of Jews, Roma, and others. Likewise, works of art are not so cheap to create. It costs something in time and money to properly research, find and create the material needed to portray a given period with some degree of accuracy. There are also the limits of the medium to contend with. To play a famous painter believably, casting another famous painter is usually not considered a smart rule for casting. The best of actors will struggle to believably render genius convincingly. There are limits to the illusion cast by a work of art in portraying a historical reality, even in the best scenario. This also applies to writers who would struggle to render the thoughts and dialogues of the distant past in a manner that is convincing to the reader, that gives a believable impression of a past where society and values were different from the present, but not so different as to be unrelatable. In cases where the given period has very few records available, most of it has to be fictionalized anyway. Likewise, where history does lean on records, there is still room for interpretation and ambiguity, so in these cases historians and artists share common ground.

In most cases however, historians and artists don't really have the same job. A historian's job is to relate the facts, and update them as new information comes to light. An artist's job is to reflect on history, showing why certain individuals and events were important and remain important decades and centuries later. Even when history is Written by the Winners and censorship dominates cultures (as it did for a long time in human history), artists tend to be drawn to particular events and figures more than others. Whether its the Folk Hero, the Founder of the Kingdom, the iconic Rebel Leader, certain people and events are interesting because they are more relatable to people than others. This often leads to a sense of distortion, where thanks to constant references in history, the impact of some historical figures looms larger than the facts would allow and in some cases, greatly exaggerates the given person or event's relative importance.

Still, while artists and historians have parallel jobs, in cases where the former doesn't keep up to pace with new research you can see the persistence of discredited information, decades and even centuries after being academically debunked. See Dated History for those rare cases where new evidence or insight actually does change the historical record. Compare Anachronism Stew (where the inaccuracies are not fictional inventions, just details drawn from different eras), Hollywood History (where the facts are mostly right, just caricatured and stereotyped, subject to Bowdlerization and Nostalgia Filter) and Future Imperfect (where characters in a speculative fiction story set in the distant future get history horribly wrong). The Historical Hero Upgrade and Historical Villain Upgrade sometimes fall into this. An Orphaned Etymology may occur when a word or name is used in a work regardless of whether the historical circumstances that brought the term into use had actually happened yet in the work's universe.