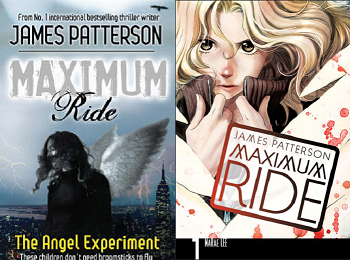 A young adult series, written by James Patterson, about evil adults trying to kill Totally Radical teenage bird kids on the run from the man. Loosely inspired by his adult books When the Wind Blows and The Lake House, though the series are unrelated. The series is divided into two parts: The Fugitives (books 1-3) and The Protectors (books 4 and onward).

The series takes Gambit Roulette to the extreme by hinting that the kids are working for the bad guys who are really good guys secretly working for the... you know what, screw it. It'd take too long to explain, and becomes so nonsensical that there's no way the author could ever explain it without using the whole "It was just a simulation" cliche, which he seems to be surely working his way towards, and used once... but that wasn't true.

The later books have turned what once was a sci-fi/fantasy with werewolves and Angelic bird kids trying to survive on their own because adults are either useless or evil, into a green-peace adventure that has the kids going from Werewolf fighting to saving penguins in the Antarctic. Also, a cult appears in ANGEL. They want to kill all the humans. And give love and caring.

There is also an OEL Manga made by NaRae Lee, which follows the plot from the start of the first book and currently has nine volumes released.

As of March 2015 there is also a Marvel Comics adaptation, Max Ride: First Flight, and its sequel, Max Ride: Ultimate Flight.

After years of Development Hell, a feature-length film was digitally released in August 2016. It was shown in select theaters that September.

A sequel series focusing on Max's daughter Hawk is being published. The first book, Hawk, was released in July 2020.