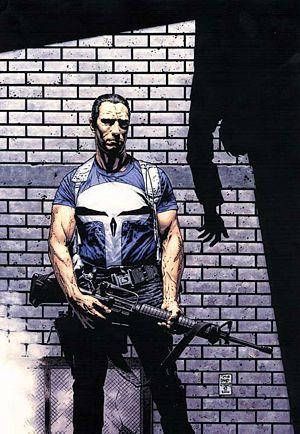 "They laugh at the law. The rich ones who buy it and twist it to their whims. The other ones, who have nothing to lose. Who don't care about themselves, or other people. All the ones who think they're above the law, or outside it, or beyond it. They know all the law is good for is to keep good people in line. And they all laugh. They laugh at the law. But they don't laugh at me."

A traumatized former Marine turned brutal vigilante, Frank Castle lost his family in the crossfire from a Mafia conflict, and declared his own personal war on the criminal underworld using a vast arsenal of weaponry. He mainly works alone, his relations with the superhero community being strained at best.

open/close all folders
A-G
Frank: "I'm stealing a car. I'm driving to New Mexico. And when I get there I'm going to shoot that guy in the face!"
H-Z
Advertisement:

Alternative Title(s): The Punisher The Character