open/close all folders
The Chicken from Outer Space 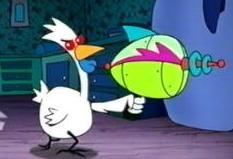 The very first monster to disturb the Main Characters' house. In the pilot, he harasses the chickens out in their henhouse and he is thwarted after he accidentally shoots himself via a mirror from Courage. He would later return, albeit as a cooked chicken, in a later episode where he looks for a new head. It is revealed later he had a wife and a kid with 3 heads. 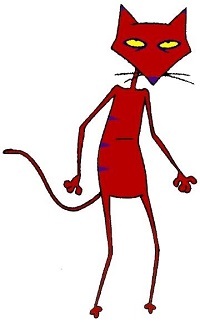 A mercilessly cruel cat who attempts to kill humans in horrifying ways and is implied to have several victims. His heart's as cold as ice, yet he seems to have great skill at games such as Handball and staring contests. He is probably the show's first Nightmare Fuel-inducing villain, considering his debut is the first episode after the Chicken from Outer Space's debut, which was more lighthearted and silly than most of Katz's episodes. 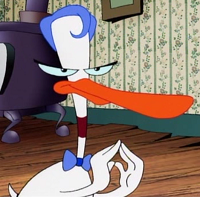 A French duck that disguises himself as many jobs but is actually a thief that steals riches from his victims. After his debut his plans are more towards getting revenge on Courage while at the same time trying to steal stuff. He always seems to escape capture every time, and repeats "They have not seen the last of...Le Quack".

An evil zombie director who puts his "actors" in a position where they'll listen to everything he says where they can be Killed Off for Real on camera or torture themselves for humor on a live TV show. 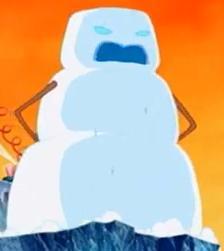 A snowman who dreads the disapperence of his snowman friends and the easily meltable substance they're made out of. He tries to avoid ever melting by extracting the Anti-Melting gene of humans in order to maintain himself as it gets warmer where he lives. He's the Last of His Kind, as all the other Snowmen melted, until Courage repairs the hole in the Ozone Layer, reviving the others and saving his home. Is also one of the few recurring foes to find redemption.