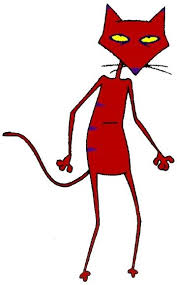 No dogs allowed on this page. I detest dogs!

You are standing in a dark room. Suddenly, an all-too familiar drum beat

starts playing, and a pair of eyes appears in the darkness. The owner of the eyes slowly steps out from the darkness.

For best effect, try reading this page in a British accent, preferably with a deep voice.

Hello, troper. Welcome to Katz's Self-Demonstrating character page. I'm Katz, not to be confused with the doctor of the same name. So, you would like to learn about me? I must say, I'm flattered.

You may have heard of me in a certain animated television program by the name of Courage the Cowardly Dog. I was the most recurring villain in the show. By this, I mean that I appeared in 6 episodes (including an episode where I only made a cameo.) Yes, I know that this does not sound like a lot, but when your show has a Monster of the Week format, there's not much room for recurring villains. I was rather lucky, actually.

These are the episodes in which I appeared: