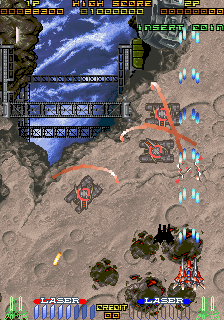 Look out below!
This is the control tower. Describe the RAY series here, over.

The RAY series is a trilogy of top-down, vertically-scrolling shooters developed by Taito. The series consists of three games, all of which have "RAY" in its title (at least in their original Japanese names). Each game have you pilot a space fighter that, in addition to being able to fire straight forward, also has special lock-on weaponry that can target enemies and home-in on them.

open/close all folders
RayForce (1993)
RayForce (pictured on the right) is the first game, and is set in a future in which the many nations of Earth assemble a supercomputer called "Con-Human" to govern the Earth's natural resources. As a result of an attempt to fuse Con-Human with the mind of a cloned human, Con-Human goes apeshit and starts destroying living organisms all across the Earth and transforming it into what it perceives as a newer, better version of it and its life forms. Humanity attempts to flee to space colonies, only to get hunted down by Con-Human there as well. Naturally, this being a shoot 'em up, it's up to one or two ships to destroy the Earth in order to put an end to Con-Human.

RayForce uses the Taito F3 hardware, and eventually ports to the Sega Saturn and Windows 95; a re-release of the original arcade game was also featured in Taito Legends 2 for PlayStation 2, the original Xbox, and Windows PC. It uses two-dimensional graphics, but because of the game mechanics, the game uses a lot of Mode 7-like graphics to simulate three dimensions. It works very, very well. A minor quirk of the game, however, lies in its naming; due to copyright problems, it has no less than four different names: RayForce for the Japanese and North American arcade releases, Layer Section for its Japanese home ports and North American Windows port, Galactic Attack for the North American Sega Saturn port, and Gunlock in Europe. On January 13th, 2012, RayForce was re-released for iOS, Android, and Amazon Fire OS devices.

A direct sequel to RayForce called R-GEAR was planned, but canceled early in favor of RayStorm. The footage of the game's early development was shown in the RAY-RAY CD-ROM promotional disc, which can be seen here

and is expected to be dumped sometime in the future.

RayStorm (1996)
RayStorm is the second game in the series, and is the first to use three-dimensional graphics. Set in 2219 A.D. and in a different timeline from RayForce and RayCrisis, Earth establishes a group of space colonies known as the Star Federation. But at some point, the colonies decide to mutiny, form an alliance known as the Secilia Federation, and strike against Earth. The player sets off from Earth in order to defend Earth from the rebellious Secilia Federation.

RayStorm runs on the Taito FX-1B board* (Taito's arcade board based on the PlayStation hardware), and as mentioned, is the first RAY game to use three-dimensional graphics, allowing for more varieties in stage scrolling and enemies. Furthermore, unlike the first game, in which you can only fire your homing lasers at enemies below you, any on-screen enemy is fair game for your lock-on attacks. If you find yourself in trouble, you can launch a Smart Bomb that inflicts massive damage to all on-screen enemies. The game was later ported to the PlayStation in all three major regions, the Sega Saturn in Japan (under the name of Layer Section II), and finally Windows PC in Japan and Europe. The ports each feature extras such as an arranged version of the original soundtrack (the PC version lack this though), an "Extra Mode" with new versions of the stages, and a 13-Ship Mode in which you have thirteen lives, with every three lives (for the first twelve lives) using a different ship and the final ship being a weaker prototype ship by default with just one credit. The North American PlayStation version, handled by Working Designs, had a contest for $10,000, and a form of Easy-Mode Mockery to discourage players from BS'ing their way through the game and calling it a day. RayStorm also got an exclusive PlayStation 2 release, via Taito Legends 2, but it's the arcade version and not the enhanced PlayStation version.

An HD version of RayStorm has been released for Xbox Live Arcade worldwide on May 5th, 2010 and a day later on PlayStation Network only in Japan. The HD re-release features the ability to play as two new ships, the R-GRAY 0* the prototype ship seen in the 13-Ship Mode of previous home ports in playable form outside the 13-Plane Mode, redesigned to be reminiscent of the RVA-818-X-LAY fighter from RayForce and the R-GEAR* a ship that serves as a namesake for the canceled sequel to RayForce, online leaderboards, sharable replays, Achievements/Trophies, and all stages are playable on any difficulty. Like RayForce before it, RayStorm also received an iOS, Android, and Amazon Fire OS re-release in 2017.

RayCrisis (1998)
RayCrisis is the third and final game of the series, and is a prequel to RayForce. Set just before the events of RayForce, RayCrisis takes the fight away from space and Earth and instead puts you in the role of a hacker striving to shut down the Con-Human by using a computer virus. This being a shoot 'em up, said virus takes the form of a ship that flies through an Extreme Graphical Representation of Con-Human's systems and attempts to destroy it from within.

RayCrisis runs on the Taito G-Net arcade hardware* (also based on the PlayStation hardware) and, like its predecessor, RayStorm, uses 3D graphics, and features an "Encroachment Meter" that must be kept to a minimum by destroying enemies. If it maxes out at 100%, you will, instead of fighting the boss of the current stage, face the final bosses early and get the worst ending of the game. Unusually for the series, the game does not send the player through the same sequence of stages every time: only the first and final stages are fixed, and the three stages in between are randomly picked from a pool of five stages. The arcade version features a user account system, with the player's data protected by one "secret character", and is used to access stage permutations that the player has previously gone through.

RayCrisis is the only game in the series not to get a Saturn port, but it still received a port on PlayStation and Windows. The PlayStation version of RayCrisis was also re-released with RayStorm in D3 Publisher's Simple 1500 series. The home ports of the game lack the two-player co-op mode of the original arcade game, but allows the player to pick the three interim stages in the order they choose, and adds an Arrange Mode with altered game mechanics. As with its predecessors, it later received an iOS and Android port in 2017, however this re-release was based on the original arcade version as opposed to the console and PC conversions.

This series feature trope examples of: