In-progress. This is the character sheet for Legend of Legaia. It is recommended to play the game before reading, as its marked with spoilers. 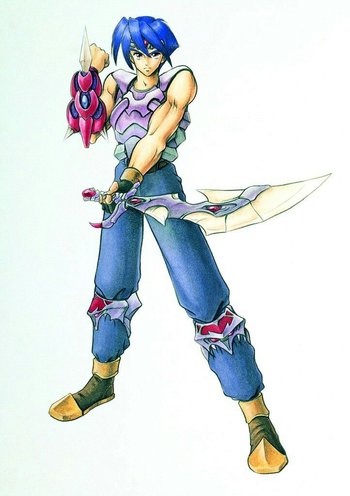 Vahn is the first main protagonist of the game. After Juggernaut busts through Rim Elm's wall, Vahn approaches the glowing Genesis Tree, from which Meta comes out. He is then chosen by Meta, and after eradicating the Mist from Rim Elm, he begins his journey to save the world from the Mist.

Noa is the second main protagonist of the game. Daughter of King Nebular and Queen Minea, during her infancy, she was eventually sent away from Conkram by her mother due to the Mist and Seru invasion. Unfortunately, the Soren who carried her soon lost his strength on top of Mt. Rikuroa and fell to his death. Landing in front of a Genesis Tree, Noa cried and was found by Terra, who then attached herself to a wolf that approached her. Since then, she lived in Snowdrift Cave with Terra until an earthquake struck and caused the Mist to infest the cave.

Gala is the third main protagonist of the game. After the death of his parents, he was raised by Maya and trained under Master Zopu at Biron Monastery. At first, he didn't truly welcome Vahn and Noa due to them wielding the Ra-Seru. However, after Songi's attack on Biron Monastery and meeting Ozma, he decided to wield a Ra-Seru as well.

The group as a whole save Songi.

Cort is the main antagonist of the game. Son of King Nebular and Queen Minea, Cort is the prince of Conkram and also Noa's older brother. Before the Mist incident at Conkram, Cort was known to be a genius who was very dedicated to his parents' kingdoms. However, since the incident, Cort's personality changed drastically due to the rogue fragment attached to him. This culminated in his further corruption and change to Big Bad.

Jette is Cort's assistant and second-in-command. He is responsible for the creation of the Mist Generator.

Zora is the former High Priestess of Conkram. She is also a co-conspirator in spreading the Mist throughout the world.

The Royal Bodyguards, but most specifically of Zora. Gi, Lu, and Che. They are charged with overseeing the Ice-Seru Koru.
Gi voiced by: Isshin Chiba
Che voiced by: Wataru Takagi
Lu voiced by: Shoko Ezaki

Songi is a monk of Biron and Gala's adoptive brother. He joins the mist henchmen in search of power and appears throughout the game to harass the heroes, but his actions are not as cut-and-dry as the other Mist followers.